Rereading the Fantastic Four comics from the start. While our heroes were in Latveria during the last few issues, we had this subplot about a mysterious house that’s really just a metal hatch out in the woods that people say is haunted. In issue #88, we finally learn what that’s about. 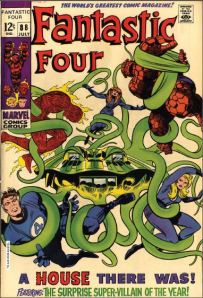 The FF are back home, checking in with Alicia, who’s been taking care of the baby. There’s some fun “family” shtick as everyone’s happy to see each other again and we learn Reed and Sue still haven’t chosen a name for the baby. Ben and Johnny exposit about Reed and Sue looking for a house outside the city as a way of keeping the baby away from harm. We then cut to the house in question, or at least the area around it, where a blinded man stumbles into traffic. He says a light dazzled him out in the woods, and that others have seen it as well.

The FF fly out to the mystery house, with Sue further saying its remote location will protect them from celebrity hunters. The door automatically opens in their presence, with a ramp leading downward. Johnny tests out the roof, and learns that it is fireproof. (What if it wasn’t, Johnny?) Inside, the house is all trippy, with twisted walls made of some kind of futuristic plastic. A strange humming sound gives everyone a headache. A couple of panels show us that the entire house is a cylinder, able to be lowered deep into the ground. But it doesn’t go underground at this time, I guess, because the next scene is Ben at the eye doctor (!) still complaining of his headache.

On the roof of the Baxter Building, some moving men are taking a break, based on union rules. Ben, not in any union, uses his awesome strength to move the boxes. At the mystery house, Reed and Sue are moving in. Reed tries to cut into one wall for some more space, but the wall is made of vibranium, and alarms go off. A bunch of death traps are activated, which Reed escapes from. While Reed investigates, Johnny and Crystal arrive with more of their stuff from the Baxter Building.

Deep underground, a man states that the FF are in danger of interfering with his plan by messing with the house. He rides an elevator up to the surface, and it’s… the Mole Man! He says his plan is to send out the light rays all over the Earth, blinding all of humanity. He also has “ultra sonic rays” which he says will “spell disaster” to his victims.

The FF, except for Ben, who’s with Alicia, enjoy a meal in their new home, with Crystal serving “hot buns.” (Wha-hey!) But then the strange humming starts again, and Reed, Sue, Johnny, and Crystal all go blind. While the stumble about in sightlessness, the Mole Man steps out from hiding and declares, “I am master of this house!” 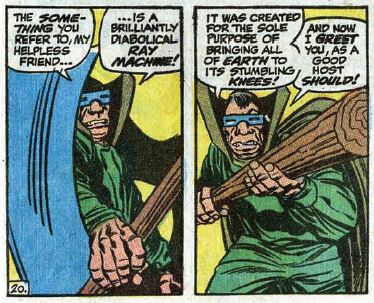 Unstable molecule: To escape a death trap, Reed stretches himself to a paper-thin state so he can squeeze out from under a glass cage

Fade out: Even after learning her new house has automated death traps, Sue is still adamant that it’s home, inviting Johnny and Crystal over for dinner.

Clobberin’ time: It’s comic relief for Ben, as he jokes around while visiting the eye doctor and then showing the lazy union guys what’s what.

Flame on: Johnny’s overseeing the move shows him in a leadership role, but earlier Reed has to caution him not to use his fire so close to the baby.

Trivia time: The last time we saw the Mole Man was in Uncanny X-Men #38, which ended when he got amnesia. It’s never been revealed how he recovered from that or how he reclaimed control of his underground kingdom.

Fantastic or frightful? The art is great, and it’s always fun to see the FF doing ordinary, everyday stuff, but these positives don’t outweigh the negatives. The big plot hole is that everyone knows there’s something dangerous about this house, they even say as much, but Reed and Sue move in anyway, just to set up the cliffhanger. It’s out of character and it makes the heroes look foolish.

Next: Walkin’ in darkness.