Rewatching 21 Jump Street! Here’s an episode that rewards the loyal fans, as it seems the entire series has been leading up to this one. It’s season three, episode fifteen, “Fathers and Sons.”

What’s goin’ down: Hanson and Penhall are investigating drugs in a high school, only to discover the head druggie is the son of Jump Street’s archnemesis, the scumbag Councilman Davis, who’s just been elected Mayor Davis. Now, city hall wants the Jump Street gang off the case, but of course our heroes won’t back down.

Here’s Hanson: Hanson’s still dating Jackie the D.A., and their relationship faces some serious hurdles after she inadvertently (or perhaps not so inadvertently) leaked info about the case to the mayor’s office.

Penhall’s prerogatives: Penhall’s still rooming with Ioki, until Ioki has had enough and throws him out. The episode ends with him still without a place to live. 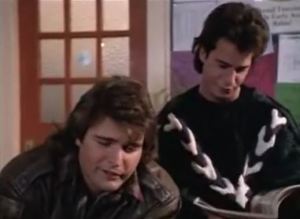 Is this kid on the right one of the aliens from the “V” miniseries?

Book ‘em: No Booker this week.

Undercover blues: Conflicts with the mayor’s office lead to Captain Fuller being suspended. Later, Davis’s son overdoses, and Davis shows his human side by asking Fuller and Jump Street to go after the drug dealer.

Goin’ to the Chapel: Ioki’s new girlfriend is stunningly gorgeous, but he swears he loves her more for her intellect.

Torn from today’s headlines: The drug use is really explicit in this episode, with depictions of teenagers doing cocaine and crack. How’d they get away with this on prime time Sunday night TV?

Trivia Time: Davis is played by actor Michael Laskin, who has a list of TV guest star credits a mile long. He even did the voice of Junior Gorg on the animated version of Fraggle Rock!

This is the mayor.

Jumpin’ or not? This episode is packed! Not only does it have the high school crime caper, but it also devotes generous screentime to the ongoing Jump Street vs. city hall subplot, and to all the characters’ various romance/relationship subplots. If this were the last episode, it would’ve made for one heck of a finale. Fortunately, though, the show continues on, and there’s more cheesy fun to be had. Next week, for example.

Next week: I wear my sunglasses at night… as performed by the cast of Glee!