Bond blurb: A space shuttle owned by billionaire Hugo Drax is stolen. Bond investigates, and it’s clear from the beginning that Drax is behind the theft. Bond travels around the globe putting the clues together. Drax wants to use his space shuttles to take his “perfect race” of idyllic humans into space, and kill the rest of us losers down on the planet. To stop Drax, Bond leads an attack on Drax’s space station for some serious zero-G laser-blastin’ action.

Bond background: Bond is actually not a spy in this movie. Like in Dr. No, he’s merely an “agent” investigating a crime. Everyone in the movie already knows his status, so there’s no need for secrecy or intrigue.

Bond baddies: Drax is a real oddity. He’s so stiff and so cold that I can only conclude that it’s the actor’s choice. Perhaps the “space” theme meant that he was intended to be like a robot. Jaws makes a return appearance, now making the jump from bad guy to good guy in the end. I always assumed that Jaws sacrifices his life during the finale, but there’s a quick line of dialogue that says he made it.

Bond babes: Dr. Holly Goodhead is a delightfully stupid name, but beyond that, I just don’t know who this character is. She’s working for Drax, but she keeps investigating him, running into Bond because they’re on the same trail. She’s a scientist, but she’s got a bedroom full of deathtrap gadgets to take out Bond. Oh, and is she trying to kill Bond, or is she on his side the whole time? I don’t get it. Was there a line of dialogue I missed that said she’s an undercover rival agent or something?

Bond best brains: Bond’s wristwatch now contains a dart gun, which he tests out by firing at a painting in M’s office. He hits the painting right on a horse’s ass (or, to be less crude, he pins the tail on the donkey).

Bond bash-ups: We’re now in the blockbuster age, so there’s a ton of big set pieces. We’ve got some great skydiving stunts in the opening, a fight atop two precariously-balanced sky trams, and two boat chases — one in South America and one in the Venice canals. The problem is that none of these action beats raise the stakes or move the plot forward. The story stops, Bond gets chased around for a while, and then the story starts again. 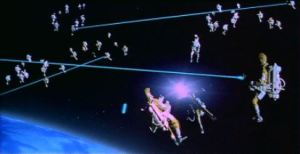 Then, Bond goes into outer space and it becomes a whole other movie. All weaponry is now laser-based, everybody zaps everybody, and Drax’s space station blows up real good. If that’s not enough, Bond then pilots the space shuttle (!) to destroy Drax’s bombs before they reach the Earth.

Bond baggage: Do I really need to tell you that this one was inspired by the huge success of Star Wars in 1977? NASA’s work on the space shuttle was also a big influence. Although the shuttle didn’t actually launch until years later, NASA’s tourism-friendly PR department made sure the shuttle was already in the public eye.

Bond babble: A few years ago, I attended a Q&A with Richard Kiel, who plays Jaws. He said that the biggest blockbusters of the late ‘70s were family-friendly fantasy movies. Therefore, the lighthearted, campy Bond was what audiences of the time flocked to, and it paid off. Moonraker, for all its silliness, was huge at the box office. I enjoy that it’s jokey and goofy, but I can also understand why goofy and jokey turn so many people off.

Next week: Eyes wide only.