Rereading the Fantastic Four comics from the start. The so-called “middle years” are famous (infamous?) for introducing a bunch of hokey, one-off villains, and that’s the case with issue #95. 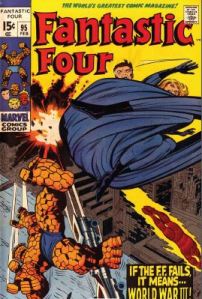 We begin with a man on the street taking photos of the FF as they stand on the roof of their building. (Heck of a zoom lens on that camera.) He’s a member of the foreign press corps, and he’s there to shoot a visiting delegation of world leaders. The Baxter Building is located right by the U.N., it seems. This man, however, has a sinister plot brewing, thinking that he has to get the delegates and the FF out of his way before he can enact his plan. The fellow calls himself the Monocle (no, really) and his camera secretly contains a “neutrak ray.” 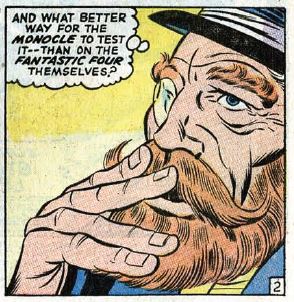 On the rooftop, Reed, Sue and Ben are gossiping about Johnny. They say that he and Crystal are having troubles. The Inhumans want Crystal to rejoin the Inhumans, but Johnny wants her to stay. The hop in the Fantasticar, with Reed saying that they have to protect the delegates, because one unfortunate incident could trigger World War III. The Monocle uses his camera to zap the Fantasticar, disintegrating it. Reed heroically pilots the falling Fantasticar to the river, so as not to destroy New York. He stretches into a soft round shape to protect him and Sue from the impact on the water.

Ben, meanwhile, had split off his portion of the Fantasticar before the attack. He comes across a collapsing building. He uses his awesome strength to hold the structure in place so the people inside can be safely evacuated. The Monocle watches this, revealing via his thought bubble that his neutrak ray was what wrecked the building. The U.N. delegates arrive, saying they’re here to resolve “the crisis.” The Monocle, still in his thoughts, exposits that he’s going to use this incident to kick off an atomic war. He plans to hide out in an underground bunker, and, after all the bombs have fallen, he’ll come back to the surface and become the world’s new ruler. Villain logic!

There’s a funny bit where Reed and Sue return to the Baxter Building wrapped in big blankets after their dip in the river. Reed insists on finding out what happened to the Fantasticar. Then we catch up with Johnny and Crystal. She says she doesn’t want to leave, but the Inhumans need her. Note that Medusa, who is both her big sister and the queen, is standing right there during this conversation. Medusa says Black Bolt, the Inhumans’ king, has ordered Crystal to come home. On cue, a teleportation/portal thingie opens, and Medusa says it’s time for Crystal to leave. Johnny resists, but Medusa uses her super-hair to throw him around the room. She then wraps Crystal in her hair and takes her through the portal. Just like that, Crystal’s gone. 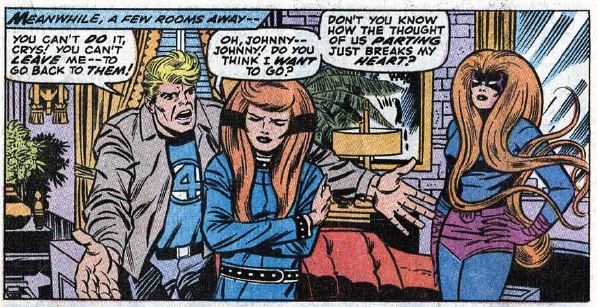 Reed and Sue enter the room, and Reed says finding the mysterious attacker has to take precedence over pursuing Crystal. Johnny reluctantly agrees, and takes off, flying over the city in the hopes of somehow finding the culprit. The Monocle spots him, and attacks, trashing various buildings and landmarks around the city. Johnny realizes that someone’s just trying to distract him, and he deduces that the U.N. conference is where the real action is. 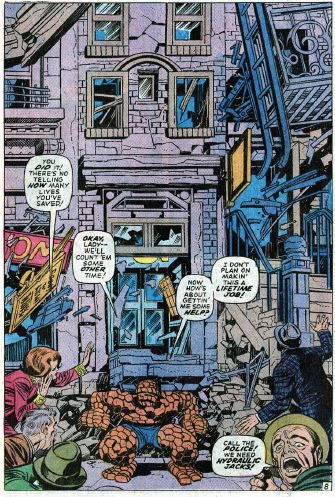 At the U.N., the delegates are about to discuss the “crisis,” and the Monocle is inside, among all the other reporters. He is about to fire his camera and kill the delegates, which he believes will set off nuclear Armageddon. Then, something destroys his camera, before he can pull the trigger. It’s Reed, holding some weird-looking weapon. He says neutrak rays are nothing new, and that’s he’s been working on them for weeks. This allowed him to invent a “reversal ray,” to negate the Monocle’s camera. The Monocle pulls out another gun, and fires concussion blasts at Reed. The Monocle tries to escape, dodging an invisible Sue and her force fields, and then leaping out the window, with little flying devices on his shoes. Too bad that Johnny is there. Johnny burns off the flying machines, and Ben catches the Monocle to turn him over to police. The issue then ends abruptly, with Reed saying the world has now earned a second chance.

Unstable molecule: Reed guiding the Fantasticar into the river to save lives is a great hero moment for him, as is his confrontation with the Monocle at the U.N.

Fade out: Sue almost catches the Monocle while invisible, but he gets away from her with a Judo move. This was after Reed said to Sue, “Only you can stop him now!”

Clobberin’ time: Many fans have said that Ben holding up the falling building is one of the character’s defining moments. Still others have argued that it’s a metaphor for the character’s struggles, carrying the world on his shoulders. I’m not sure I’d go that far, but it is a great scene.

Flame on: Although broken up over Crystal leaving, Johnny nonetheless is quick to figure out that the Monocle is messing with him. Nice to see him use his brains.

Fantastic fifth wheel: We’re not told why, exactly, Medusa and Black Bolt demand that Crystal return, especially after they (presumably) gave permission for her to stay with the FF in issues 82-83. Crystal says she’ll find a way to return to Johnny, but the breakup still seems pretty final. This storyline will be revisited in issue #99.

Commercial break: I always wondered what these things were — cardboard standees, or something more? 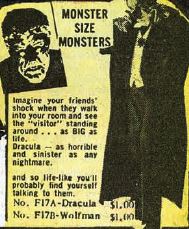 Trivia time: The Marvel Wiki says the Monocle is a German spy, who was hired by someone else to attack the U.N., but that’s not in this issue! In the actual story, it’s his own plan to start a war and then take over the world after the bombs fall. Not cool, Marvel Wiki.

Fantastic or frightful? This Monocle guy is D-list, but the book is smart enough to know he’s D-list. Once the FF figure out what’s going on — and they’re quick to do so — the Monocle doesn’t stand a chance against them. So there’s not a lot of suspense or high stakes in this one, but it’s kind of fun to see the heroes take out a villain who stands no chance against them.

Next week: The duplicators.