Rewatching 21 Jump Street. Season three was when the show went big. It was the height of its popularity, it had ambitious storylines and feature-worthy production value. It’s fitting, then, that the season finale cliffhanger is a two-part epic. The first half is season three, episode nineteen, “Loc’d Out, Part 1.”

What’s goin’ down: Gangland violence is on the rise. After Ioki is almost killed in a drive-by shooting, Hanson is sent in undercover to infiltrate the Lords, the city’s meanest gang. It’s on him to find out who is supplying the gang with illegal firearms.

Here’s Hanson: Hanson is put through the ropes to learn to be a gang member. Not only does he have to learn the slang, but the pressure is on to toughen up, stare down the other gangstas, and not “punk out.” This continues the character’s ongoing evolution, transforming from “nice guy” to “bad boy.”

Penhall’s prerogatives: Penhall seems to know a lot more about gang culture than any of the others, yet it’s never explained why he’s not the one to go undercover. He also has an interesting suggestion on how to deal with the gangs. Instead of taking away their guns, give them shooting lessons so they don’t accidentally hit innocent bystanders.

Book ‘em: Booker is so worried about Ioki that he starts smoking cigarettes again, after he previously swore he’d never pick up the habit again.

Undercover blues: Hanson endears himself to the gang by beating up a couple of cops. He later discovers the source of the gang’s illegal guns — a pair of corrupt cops! They’re selling equal amounts of weapons to both sides of the gang war, playing the gangstas against each other. Hanson breaks into the bad cop’s house without a warrant. He gets caught, there’s a gunfight, and it ends with Hanson on the run after shooting a fellow police officer. Uh-oh! 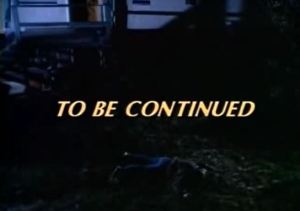 Trivia time: Music for this episode was originally provided by rapper Tone Loc, but whatever those tunes were, they’ve been replaced by generic songs on the DVDs and online, thanks to music rights legalities.

Torn from today’s headlines: This episode aired a whole two years before films like Boyz in the Hood and New Jack City introduced gang culture to the mainstream. Drive-by shootings have, sadly, been a part of American culture since at least the late ‘60s. Some historians argue that drive-bys date back to the Prohibition era of the 1920s.

Jumpin’ or not? Not a lot of laughs in this one, but for an hour of “cop show” drama, it’s pretty great. The gang stuff is probably not realistic, but it does the job of placing our heroes in unfamiliar territory. There are a lot of surprising twists and turns, leading up the big confrontation at the end between Hanson and the evil cop. It’s a tense chase and gunfight that ends with another shocking twist, so that you can’t wait to see what happens in part two. It’s jumpin’!

Next week: Hanson on the run.