Rewatching 21 Jump Street! The show’s producers went and got creative in this one, creating a throwback to old-timey film noir, albeit one with Jump Street’s usual sense of neon-drenched style. It’s season four, episode three, “Eternal Flame.”

What’s goin’ down: The Funhouse is the hottest nightclub in the city, and allegedly a haven for drug peddlers. For the second week in a row, our heroes are undercover as bouncers. One problem: The club owner’s wife knew Hanson from before he was a cop. Now, his loyalties are divided between doing the job and rekindling feelings for an old flame.

Here’s Hanson: The shooting and jail time Hanson went through in the season finale/premiere still weighs heavily on his mind. When asked about what happened to all his hopes and dreams he holds this up as an example as to how much he’s changed.

Penhall’s prerogatives: Penhall’s ticked at Hanson when Hanson doesn’t let him into the club. This was because Penhall was wearing penny loafers. (Penny loafers?!?) It’s just the tip of the iceberg, as Hanson’s romantic woes create a ton of tension between him and Penhall. His love of bowling gets another mention, though, so he’s not totally gone off the deep end.

Undercover blues: Turns out Hanson’s ex’s sleazeball husband secretly made her owner of the club so she’d take the fall for the drug empire. It doesn’t work, and Hanson and Penhall take him out in a gunfight. Hanson and his ex then have a Casablanca-style tearjerker goodbye as she leaves him.

Do real nightclubs actually have girls dancing in cages, or it just a Hollywood thing?

Goin’ to the chapel: To look cool for the club, Penhall buys a $1,200 suit and puts it on the police department’s tab. There’s a funny bit where Captain Fuller finds the invoice for the suit stuffed into his jacket pocket.

No, I don’t know what’s going on with that shirt, either.

Trivia time: The title is a reference the song “Eternal Flame” by the Bangles, which originally appeared in the episode, but has since been replaced with generic music for DVDs/online. Thomas Haden Church of Wings, Sideways, and Spider-Man 3 plays a nightclub thug with HUGE HAIR. 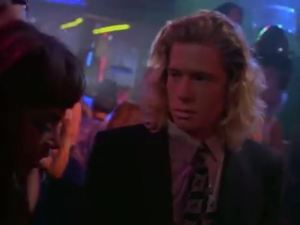 Torn from today’s headlines: The drugs in question are “blotter acid,” which is attached to seemingly innocent-looking buttons handed out at the club’s front door. I actually remember them warning us about this stuff back when I was in high school. 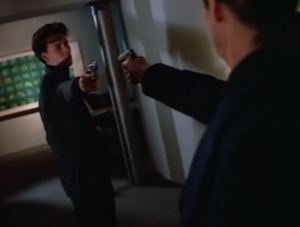 Jumpin’ or not? After hitting a home run with last season’s “High High,” Mario Van Peebles proves himself to be the series’ directing rock star with this super-stylish episode. Scenes in the club are ‘80s glitz in the best way, all neon, lasers, and fog machines. When we go behind the scenes at the club, though, we enter the film noir universe, all sharp suits, mournful saxophone music, and dirty double crosses. If you have a friend who thinks 21 Jump Street is nothing but “that cheesy high school cops show,” show them this episode and watch their minds be blown. It’s jumpin’!

Next week: Buy a baby?