Rewatching 21 Jump Street! The show is famous (infamous?) for doing “message” episodes, and this one is one of its most message-ist. Oh, and one of the main characters gets married. It’s season four, episode four, “Come From the Shadows.”

What’s goin’ down: Our heroes are undercover in a Catholic high school, investigating a priest who is running a charity to help children in El Salvador, but who might be really up to a scheme, illegally selling orphaned babies from that country to childless couples in the U.S. 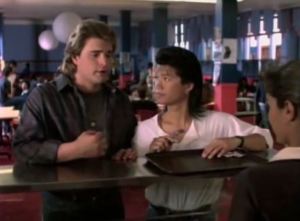 Back in high school.

Here’s Hanson: No Hanson this week, and not a mention of where he is. Rumor has it Johnny Depp was off filming John Waters’ Cry-Baby during this one.

Penhall’s prerogatives: Penhall falls head over heels for Marta, a cute Salvadoran lunch lady. Despite her possible involvement in the case, he’s so head over heels for her that he proposes! She says yes, and they run off and tie the knot right then and there. 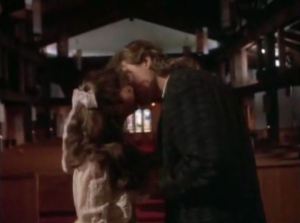 Undercover blues: Turns out Marta’s a Salvadoran refugee, who was once imprisoned and tortured before fleeing the country to the U.S. She argues that the babies are here with their parents, seeking political asylum and not to be sold. Unfortunately, Marta’s involvement in the case means she gets deported back to El Salvador at the end of the episode, despite her marriage to Penhall. Major bummer. 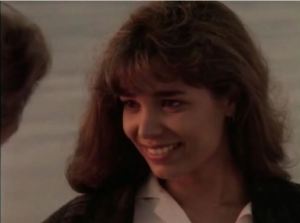 Goin’ to the chapel: At the chapel, Penhall and Ioki argue about who really invented basketball, modern-day Americans or ancient Aztecs. Junk seen in the background of the chapel include one of those cat clocks with the moving eyes and tail. I look it up — they’re called “Kit Kat Clocks.”

Torn from today’s headlines: The Salvadoran Civil War had been going on for about 10 years at the time this episode aired, and things must’ve gotten pretty nasty. In 1992, the United Nations stepped in and brokered a peace agreement between the government and the various guerrilla groups. A year later, a study revealed that there were numerous human rights violations on both sides during the war. 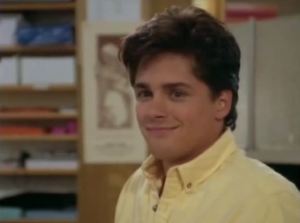 Trivia time: One of the students is played by the awesomely-named Billy Warlock, who went on to star on Baywatch for several years. Star Trek fans will recognize actress Julie Warner, who played Geordi LaForge’s crush Krisy Henshaw, who didn’t like him “in that way.” (She didn’t know what she was missing, right Trekkers?) 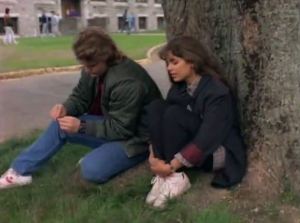 Jumpin’ or not? What a depress-fest. All the hand-wringing about the atrocities going on in El Salvador is laid on real thick, so much that it upstages the fact that one of the main characters gets married. To have Penhall and Marta wed only for her to be immediately taken away makes this for one dreary downer of an episode. Not jumpin’.

Next week: This principal is not your pal.