Rewatching 21 Jump Street! Time for another trip back to the inner city, and the societal woes that go with it, in season four, episode five, “God is a Bullet.”

What’s goin’ down: At the worst, toughest high school in the district, there’s a hardass new principal determined to clean the place up, no matter what. The Jump Street cops are there too, undercover while investigating a drive-by shooting that happened in front of the school.

No need for a caption. These facial expressions say it all.

Here’s Hanson: Depp is off pursuing his film career again.

Penhall’s Prerogatives: Penhall is assigned to be one of the school’s new “safety monitors,” who walk the halls and report what the bad kids are up to. 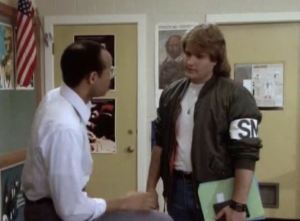 The “SM” stands for “simplistic metaphor.”

Undercover blues: A kindly teacher tries to reach Penhall, pointing out that Penhall acts more like a cop than a student. He causes Penhall to question whether the principal’s tyrant-like ways are truly for the best.

Goin’ to the chapel: When Hoffs is establishing her cover story, she says she was expelled from Lincoln High, which was the similarly-troubled school from season two’s “Don’t Stretch the Rainbow.”

Torn from today’s headlines: Where to begin? The episode’s opening montage is a rundown of every “bad school” cliché you can think of — drug dealing, graffiti, guns in school, fighting, and more. Also, the plot is highly reminiscent of the 1987 film The Principal.

Trivia time: The no-nonsense principal is played by Tim Thomerson, best known for his pseudo action hero roles in Dollman and Trancers. He plays the principal with the same gruffness that he used as sci-fi hero Jack Deth. 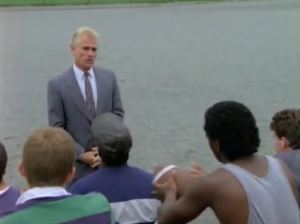 Jumpin’ or not? We’ve gone back to the Jump Street well with this one, which feels like a season one or two episode. Tim Thomerson gives a solid central performance as his principal character keeps tightening his grip on the school, but other than that, there’s a feeling of “Haven’t we done this before?” in this one. Not jumpin’.