I went and did it. I watched all 23 James Bond films in order, taking detours into the 1967 Casino Royale, Never Say Never Again, and the ‘90s cartoon James Bond Jr.

Here’s a few observations I made:

Bond the cop: Bond is famously a spy, but a lot of these movies are closer, plot-wise, to the detective genre. Bond is often an “agent,” not working undercover at all, investigating crimes, digging up clues, and so on. 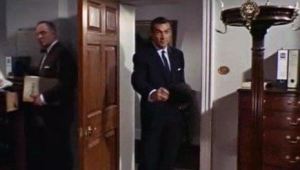 The hat gag: In Dr. No, Bond throws his hat across the room, to have land perfectly on a hat rack. The producers must have loved this, because the movies have variations of the hat gag on and off, all the way up to A View to a Kill.

There’s no Blofeld: Blofeld is Bond’s supposed to Bond’s numero uno nemesis, but there’s not a lot of consistency to his character. His only motivation is really greed, as his plots are not political, but just big crimes. What’s more, each actor who’s played Blofeld has done it so differently, that each one is like a different person. The only consistency is the damn cat.

Favorite Bond baddies: Largo from Thunderball is very much the atypical Bond villain, with his eyepatch and swimming pool full of sharks. Auric Goldfinger is another favorite, in that every time he appears on screen, the stakes get raised and another layer of cruelty is revealed.

Least favorite Bond baddie: Dominic from Quantum of Solace is utterly forgettable, his only character trait being a short temper. Graves from Die Another Day makes a fool of himself by wearing a computer suit instead of just using a computer.

Favorite Bond babe: Volpe from Thunderball is simply the coolest. She’s the Boba Fett of the Bond franchise.

Least favorite Bond babe: The World is Not Enough is actually a great movie… when Denise Richards isn’t in it. Is there a “phantom edit” of this one without her in it?

Favorite Bond best brains: I always enjoy the trips through Q’s wacky workshops, and the humorous “things-that-look-like-other-things” gadgets. They’ll never top the car that turns into a submarine from The Spy Who Loved Me.

Favorite Bond bash-up: The assault on the villain’s volcano lair in You Only Live Twice is one of all the-time great set pieces, still exhilarating today as it was in the late ‘60s.

Least favorite Bond movie: At least Die Another Day has the swordfight. At least Live and Let Die has Jane Seymour’s hotness. But Octopussy? I can’t think of an “at least” for that one. It’s just dreadfully bad.

Favorite Bond movie: I gotta go with the popular opinion and pick Goldfinger. Here’s a movie that hits all the right notes, from beginning to end.

Well, that’s over. What should I do next with this blog? Anybody have any suggestions?