Rewatching 21 Jump Street! Hope you like watching people look through windows, because there’s a lot of it in season four, episode eleven, “Parental Guidance Suggested.”

What’s goin’ down: Our heroes are undercover in a suburban house, where the neighborhood has been recently plagued by break-ins. The local neighborhood watch suspects a group of rough n’ tumble teens who recently moved in. 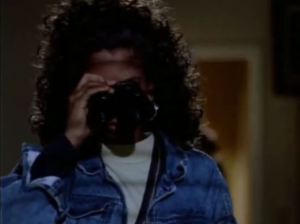 Here’s Hanson: Depp isn’t in this one, but it’s mentioned that Hanson is the one who has to go get his fellow cops out of lockup after they’re busted by the neighborhood watch.

Undercover blues: While watching the suspected criminals, Hoffs is instead drawn to the house next door, where she fears a father is abusing his kids.

Goin’ to the chapel: Jump Street’s janitor Blowfish once again gets roped into doing police work, buy going across the street to get inside the suspects’ house, only to get himself busted. 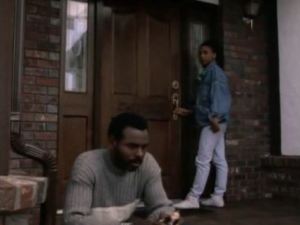 Torn from today’s headlines: Domestic abuse the social issue du jour, and one scene has Captain Fuller opening up about his own abusive father.

Trivia time: This episode obviously riffs on Alfred Hitchcock’s classic Rear Window. Some other ‘80s shows that did Rear Window-themed episodes include Cagney and Lacey, Roseanne, Kate and Allie, It’s a Living, and even The Love Boat.

“This is my worry wall.”

Jumpin’ or not? This whole episode is about Judy struggling to convince her fellow cops that an abusive situation is happening next door. The problem is that this is hugely out of character for them. You’d think that they’d know to trust Hoffs after all they’ve been through, and if there’s a kid in trouble, certainly they’d rush to help. Not jumpin’.

Next week: Truth and/or consequences.