Rereading the Fantastic Four comics from the start. We’re quickly burning our way through the “middle years,” after Jack Kirby but before John Byrne. 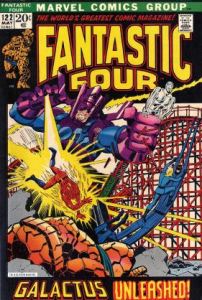 Issue #122: Galactus is back! And he’s totally ticked off for some reason! He says he’s here to destroy the Earth, but Reed reminds him that he made a vow not to do so. Galactus then says he’ll spare the Earth in exchange for the Silver Surfer. He wants the Surfer to be his herald again. The Surfer refuses and… everyone fights! Despite his godlike powers, the FF do a much better job of fighting him than before, with Ben even managing to knock him off his feet. The battle takes everyone to a nearby amusement park (Coney Island, maybe?) where the Surfer decides to fly off to Galactus’ ship, to draw him away from Earth. Only, the barrier that keeps the Surfer trapped on Earth won’t let him reach the ship. 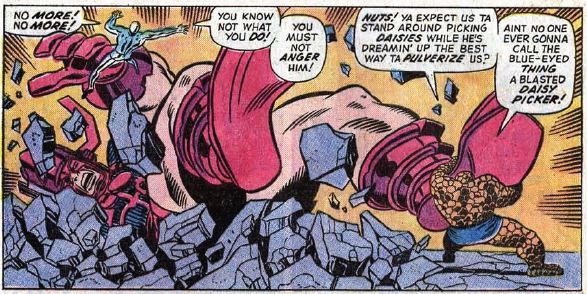 Back on Earth, Galactus trashes the roller coaster as everyone keeps fighting. Ben uses a Ferris wheel as a weapon (!) but gets himself knocked out. Reed and Sue leave the battle, so Johnny has to face the Big G all alone. Reed and Sue make it back to HQ, where they board their personal rocked (not a euphemism) and head into space, to take control of Galactus’ ship. Reed puts on a space suit and tries to board the ship, but a force field around it sends Reed flying off into space (the movie Gravity totally ripped off this comic). Sue uses her force field to punch a hole in the ship’s force field, and Reed goes inside, into the gigantic, alien control room. Reed then contacts Galactus, threatening to destroy his ship and exile Galactus on Earth if Galactus doesn’t comply. 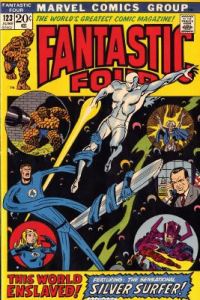 Issue #123: Galactus responds to Reed’s threats with threats of his own, saying how easy it would be for him to devour the Earth and destroy them all, no matter what Reed does. Galactus then gives Reed until nightfall to meet his terms and return his ship. Then we get some odd business with Galactus wandering around New York, messing with stuff. He throws some trains around and then gets into a fight with the army. Back at HQ, Sue, how has somehow returned from space, gets a phone call from President Nixon (!), saying Reed has no legal authority to negotiate with Galactus. (Frustrated with Sue, Nixon scoffs, “Women!”) 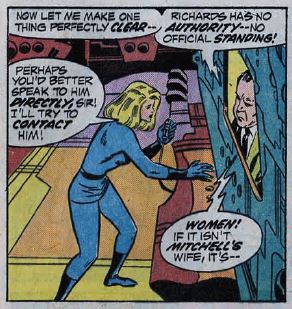 Galactus returns to the FF, and the Surfer agrees to return to Galactus’ servitude, sacrificing his freedom to save humanity. Reed tries to stop the Surfer, saying he has a plan. Then there’s a weird bit where Reed and Surfer fight while the military opens fire on both of them, hitting Reed with a bullet. Johnny and Ben kick the soldiers’ butts while the Surfer uses the power cosmic to heal Reed. Reed and the Surfer then go to Agatha Harkness, who uses her astral projection magic to allow Reed to speak to the entire world at once. He explains that he tricked Galactus, so that Galactus and his ship are now flying around inside the Negative Zone, and not in our universe. The Surfer flies off, still exiled on Earth, but free — in his own way. 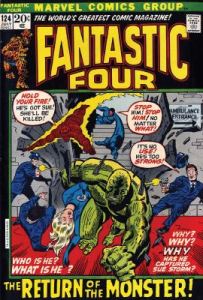 Issue #124: This one begins with several pages of action as Reed passes out while piloting the Fantasticar and his teammates work together to keep it from crashing. They rush Reed to the hospital, where all the nurses are freaking out, saying they were attacked by a monster. While Ben and Johnny investigate, the monster appears, knocking out Sue and taking her prisoner. After raiding the hospital storeroom, the monster rampages through New York, with Johnny in pursuit. It reaches the lake at Central Park, where it disappears with Sue. At the hospital, doctors diagnose the only thing wrong with Reed is stress and exhaustion, and he needs to take it easy. 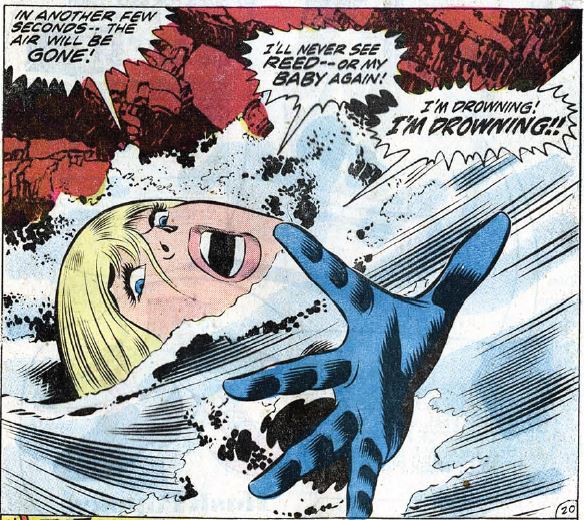 Sue, meanwhile, wakes up in an underground cave. She tries to escape the monster, and accidentally floods the entire cave. Back at HQ, Johnny figures out that the monster is the “Monster from the Lost Lagoon” from issue #97. Reed wakes up at the hospital and wants to go rescue Sue, but he passes out again, not even know that she’s in danger of drowning. 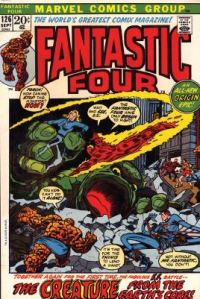 Issue #125: Sue surrounds herself with a force field while underwater, but worries that it’s only a matter of time before she runs out of air. At HQ, Johnny spends several pages recapping issue #97, reminding readers that the monster is really a space alien, who only wanted to repair his crashed spaceship and get off of Earth with his mate. Inside the cave, the monster stops the flooding as Sue wonders what it is that he’s after. Reed tries to escape the hospital, but is still overwhelmed with exhaustion. Ben and Johnny want to take the pogo plane back to Central Park, but they forgot to refuel it (!) so there’s several pages of comedy business with Ben helping himself to one of Johnny’s hot rods to drive there. 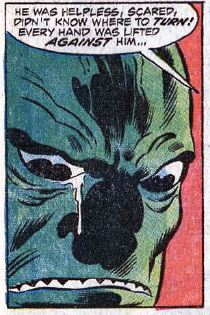 Reed reunites with Ben and Johnny at the lake, even though Reed is acting all crazy and delusional. With a breathing apparatus, Johnny swims down into the lake and fights the monster underwater. By making the water boil, Johnny forces the monster to the surface, where it fights Ben. Reed stops the fight, saying that he knows why the monster is there. He says the monster’s mate picked up an Earth illness when they were last here, and had to return because only Earth medicine could cure her. As the monster leaves Earth again, Reed says they are like “brothers.”

Issue #126: On the first page, it appears Dr. Doom is attacking the Baxter Building, but it’s just an illusion conjured by Reed with his thought-projector helmet (last seen in issue #27). Then there’s a lot of soap opera business, where Sue chides Reed for not spending enough time with Franklin, Ben says he and Alicia shouldn’t get married until they get to know each other better (?), and Ben and Johnny bickering. Johnny flies off in a huff, and Reed and Sue take off to visit their son, leaving Ben alone.

Ben uses the thought-projector to reminisce, and most of the rest of the issue is a retelling of the group’s origin story, and their first battle with the Mole Man, all the way back in issue #1. He also flashes back to the group’s confrontation with Mole Man in the “futuristic house” story from issues #88-90. Ben then gets an idea: He suspects Mole Man has the cure for blindness, what with him living in the dark underground all this time, so he marches off to find Mole Man and get a cure for Alicia.

Unstable molecule: We’re never shown how, exactly, Reed gains control of Galactus’ ship, or how, exactly, he tricks Galactus into entering the Negative Zone. Then, Reed’s exhaustion-based fainting spells are introduced out of nowhere and then not treated with much concern.

Fade out: Sue shows some exciting new uses of her powers, including a razor-sharp force field to cut through her restraints after the monster kidnaps her.

Clobberin’ time: Is Ben getting stronger? He knocks Galactus over, and he lifts an entire Ferris wheel over his head.

Flame on: The artists experiment with a new look for Johnny in one issue, giving him wavy “fire hair.” Thankfully this doesn’t last.

Four and a half: When Reed and Surfer visit Agatha Harkness, Reed holds Franklin while fretting over the fate of the world, so he’s not totally negligent.

Commercial break: Invite your friends over for a haunting! 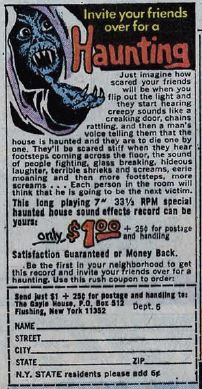 Trivia time: The general who leads the troops in attacking Galactus is Thunderbolt Ross, famous for constantly pursuing the Hulk.

Fantastic or frightful? Painful. Galactus is acting way out of character, not like a godlike celestial being, but like any of the lesser, power-mad thugs the FF has faced. The monster issues are another remake of Creature from the Black Lagoon, and the origin retelling comes off like filler. On the plus side, John Buscema’s artwork really shines, and it’s clear by this point that he really “gets” the FF.

Next week: Way down in the underground.