Rereading the Fantastic Four comics from the start. We’re trudging through the “middle years,” after Jack Kirby but before John Byrne. 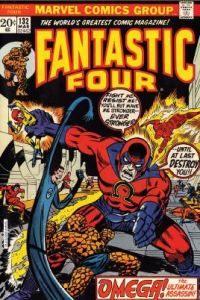 Issue #132: So at the end of the last issue, Johnny learned that Crystal had dumped him for the mutant Quicksilver. Then the Inhumans’ servants, the Alpha-Primitives, revolted and their leader Omega took Crystal captive. This one begins with several pages of fighting as Johnny and Quicksilver fight Omega, reluctantly teaming up to rescue her. The rest of the FF, now in the form of Reed, Ben and Medusa, arrive, with Ben keeping their plane from crashing by punching through the hole and grabbing a nearby tower. (There’s a funny meta moment in which Reed admits that this breaks every known law of aerial dynamics.)

They’re met by the Inhuman royal family, who catch the FF up to speed in time for Omega to attack. He resists all the heroes’ attacks, seemingly growing more powerful with his hit. Black Bolt uses his super-voice, described as “nigh-sentient sound” (!), but not even this slows Omega down. The rest of the Inhumans in the city form a giant army to fight back. Reed, meanwhile, discovers Maximus the Mad had built a perpetual motion machine before his most recent imprisonment, and Reed deduces that this has something to do with Omega’s attacks. He interrupts the battle by stretching himself into a big wall between the Inhumans and the Alpha Primitives, and then Crystal explains to everyone that Maximus’s machine is powered by the guilt the Inhumans feel over oppressing the Alpha Primitives, which in turn gives Omega his strength. (At least I think that’s what she’s saying. It’s confusing.) The two armies go their separate ways, overcome by what the comic calls their “racial guilt.”

Medusa then thanks the FF by repairing their torn costumes and giving herself a “4” costume of her own, officially making her Sue’s replacement. Johnny gets himself a new red and yellow costume, and he and Crystal have a heart-to-heart. She says the love just isn’t there any more, and that her heart belongs to Quicksilver now. He says he’s glad they’re parting on good terms. 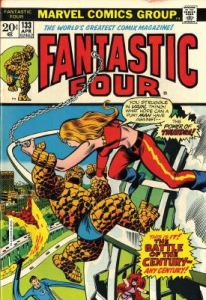 Issue #133: It’s New Year’s Eve and the new FF are among the revelers in Times Square. (This issue was released in April.) Our heroes are wallowing in depression over everything that’s happened, with Sue and Crystal both leaving, and Ben continuing to be a monster. Reed snaps out of it a bit and says that 1973 represents a bright new future. Just before the ball drops, it’s destroyed by super-strong female brawler Thundra. She challenges Ben to a duel in three days’ time, taking Alicia hostage so he’ll have to comply. Word spreads throughout the city of the upcoming fight, to be held at Shea Stadium somehow, with various Marvel heroes chiming in on who they think will win. Thundra rejoins her teammates in the new Frightful Four in their hideout, an “abandoned water tower” in Queens.

The big day comes and the stadium is filled with spectators, and there’s even a referee monitoring the fight. Who’s organizing all this? Thundra knocks Ben out of the stadium’s ruining the Frightful Four’s plans to blow it — and her — up. Ben and Thundra fight atop New York’s World Globe statue. Just when it looks like Thundra has won, Reed uses a device that temporarily turns Ben back into a human. Thundra says she refuses to fight a weakling, so she leaves. Ben turns back into the Thing, saying, “Guess you can never figger a dame!” The three remaining members of the Frightful Four swear revenge on both Thundra and the FF.

Issue: #134: This one starts with the FF getting a summons from supernatural nanny Agatha Harkness. They arrive at her home, only to find a crater in its place. (?) They fly back to New York, while secretly being watched by hidden cameras. The mystery man watching them fires on the Fantasticar, knocking it out of the sky. The mystery man hoped to knock them unconscious, and is furious it didn’t work. It’s then revealed that the stranger is none other than Gideon, the criminal super-genius the FF fought way back in issue #34. Gideon’s young son is distressed that his dad had no time for him. Gideon says that if he can’t capture the FF, he’ll instead capture Sue and Franklin.

From there, we check in on Sue, who is visiting her childhood friend Carol at a ranch in Pennsylvania. (While horseback riding, Sue says, “I feel like a girl again!”) Dragon Man, the giant android originally created by Diablo, attacks the ranch and flies off with Sue and Franklin. Reed gets a private message and flies off by himself, not telling his teammates where he’s going. Dragon Man arrives at Gideon’s compound with Sue. A fight breaks out, Sue is captured, and Dragon Man is stunned by Gideon’s henchmen. Elsewhere, Johnny checks in with his old girlfriend Dorrie Evans, only to discover she’s married with two kids! He then is attacked by Gideon’s goons. Ben and Medusa follow a radio report about Dragon Man, discovering Gideon’s hideout. They get knocked out, and Gideon emerges from underground, in an orange and purple metal suit. He’s captured Reed as well, and he says that he will soon be so powerful that neither man nor god can stop him.

Issue #135: Johnny arrives at Gideon’s hideout, where he gets knocked out by Dragon Man and the henchmen. (Great band name!) Gideon says he plans to hook the unconscious FF up to his “Eternity Machine” Dragon Man, who has some sort of “connection” with Sue, tries to free her, but can’t escape Gideon’s sonic control. Gideon explains that since he last encountered the FF, he and his family were caught in a nuclear blast, and only Gideon and his son survived. They both have radiation poisoning, and even with Gideon’s cool new high-tech suit, he only has a year or two to live. Gideon believes that the FF’s exposure to cosmic rays will save him.

Ben, Johnny, and Medusa escape from their high-tech cages and… fighting! Gideon’s suit is powered by the combined cosmic rays of Reed and Sue, which gives the strength to go toe-to-toe with Ben. Medusa wakes up Dragon Man, who joins the fight in the hopes of protecting Sue. There’s a huge explosion in which we’re meant to believe that Dragon Man and Gideon both die. Sue leaves with Franklin, saying she still loves Reed, but she needs more time to think things through.

Issue #136: This one starts where the last one left off, with Reed promising to give Gideon’s son medical treatment for radiation poisoning. Our heroes leave, and, in the remnants of the battle, one of Gideon’s henchmen comes to. The man, Slugger Johnson, reminisces about the good old days of high school, riding motorcycles and fixing up cars. He’s then contacted by an alien being called the Shaper of Worlds. The Shaper says he’s been searching for someone whose dreams will give him the energy he needs. He infuses Slugger with power, causing a wave of energy to ripple throughout the entire world. This causes the Fantasticar to crash, just in time for the FF to stumble upon an old fallout shelter under attack by flying bikers. No, I’m not making this up.

The battle is halted by the appearance of the “Protectors for the Nation,” who are motorcycle cops on flying motorcycles. From there, the FF discover the Earth has been transformed into an alternate 1950s of greasers vs. squares, all with a sci-fi twist. Reed and Ben are taken captive by the Protectors, and Johnny and Medusa are off with the bikers. There are various references to the Youth Party and Malt Shops before the bikers bring Johnny and Medusa in contact with their leader, a tough guy named “Wildman.” Both groups brainwash the FF (!) in regards to a super-weapon built by an Einstein-like figure they call “The Brain.” This sets up a cliffhanger in which it’s going to be Reed and Ben versus Johnny and Medusa in a fight over the weapon.

Issue #137: Instead of the 1950s, now it’s medieval times, as Ben and Reed, inexplicably cured of their brainwashing, storm a castle to get the superweapon. They fight the castle knights, who are armed with laser guns, and then Medusa and Johnny show up, still brainwashed. As the teammates fight each other, the “Brain” looks on in horror from a tower window. Turns out the “Brain” is Slugger Johnson, who complains against the Shaper for transforming the world. To stop the FF, Slugger says it’s time unleash his weapon, called “the Warhead,” and taken from his memories of old B-movies. The giant monster steps right out of a drive-in movie screen (which is… inside the medieval castle?) and rampages.

Then there’s an incredibly uncomfortable scene that attempts to comment on 1950s racism, by having a secret society of African Americans living underground, who are organizing a rebellion. After much fighting, the FF and the bikers defeat the Warhead. Just as the bikers and Protectors are about to fight each other again, the African Americans show up and announce that it’s actually the ‘60s (this comic was published in 1973). Somehow, this makes reality fade back into what it originally was. The Shaper says he has freed Slugger and will instead take Gideon’s son with him. He promises to cure the boy of radiation sickness, and, in exchange, the kid will give the Shaper dreams to live off of. “It will be a pleasant life for both of us,” the Shaper says.

Unstable molecule: Reed’s stretching is powerful enough for him to turn his body into a huge wall, separating two sides of a battlefield.

Fade out: Sue admits that she still loves Reed and they’ll be probably end up back together again, but that she needs some time apart for now.

Clobberin’ time: There are a couple of references to Ben wanting to go see The Godfather, showing just how huge of a blockbuster it was back in the day.

Flame on: Johnny says his new red and yellow costume was inspired by the WWII Human Torch (the android one).

Fantastic fifth wheel: Medusa is now officially a member of the team. She’s fond of proclaiming, “By Agon!” which I guess is the Inhumans’ deity.

Four and a half: While at the ranch, Franklin shows some interest in an ant hill, and the ants act as if they are obeying his mental commands, which continues to foreshadow his developing powers.

Commercial break: What the heck?

Trivia time: Issue #133 was drawn by Ramona Fradon, the first female artist to work on the series. She is best known for co-creating DC’s Metamorpho.

Johnny’s girlfriend Dorrie Evans was a regular character in his Human Torch solo series, but this is the first time she’s been depicted in Fantastic Four.

The “Warhead” monster is a reference to Ro-Man from the classic B-movie stinker Robot Monster 3-D.

Gideon’s son will eventually return from his time with the shaper, but with powers and calling himself “Glorian.”

Fantastic or frightful? Where to begin? Plot holes, logical gaffes, confusing action, and obnoxious political heavy-handedness. It’s tempting to shrug and say “Well, it was the ‘70s” but this was the era of Gwen Stacy’s death, Jim Stalin’s first Thanos War, and the rise of Marvel horror with Tomb of Dracula and Werewolf By Night. These FF issues aren’t just bad, they’re abysmally bad when compared to their contemporaries.

Next week: It’s a miracle.