Re-reading the Fantastic Four comics from the start. We’re still suffering our way through the “middle years,” after Jack Kirby and before John Byrne. These ‘70s FF comics are dreadful, but I remain hopeful we can discover some sort of hidden gem before we get to issue #200. Will it be this week?

Issue #144: Reed, Medusa, Ben, and misunderstood monster Darkoth approach Dr. Doom’s secret hideout in the NYC sewers, hoping to stop Doom before he unleashes a “vibration bomb” that will rewrite all human brains to make them perfectly loyal to him. (Got all that?) They’re attacked by a green-skinned monster called the Seeker, which Reed immediately deduces is one of Doom’s androids. They knock out the Seeker and take him back to the Baxter Building. Only it seems that they’re too late, because Doom launches the bomb into the atmosphere. Check out Doom’s cell phone:

As the world succumbs to Doom’s mind control, the Seeker returns to Doom’s hideout and frees Johnny, who was captured by Doom last issue. Fighting! Doom escapes in a rocketship disguised as a skyscraper, but Darkoth stows away and confronts Doom. Their fight in space destroys the bomb, ending the mind control. (I guess we’re meant to think Doom is dead, but we all know better, right?) Instead of a happy ending, but it ends on a downer note, as Ben and Johnny go their separate ways, still upset with Reed from zapping Franklin into a coma a few issues back.

Issue #145: Johnny and Medusa are summoned to the Himalayas, having to do with Crystal and Quicksilver’s upcoming wedding (that was quick), as well as an Inhuman secret called “Project Revival.” Their plane crashes and they’re attacked by yetis. The monsters speak an alien language, except for their leader, a big ape-like guy named Ternak. They fight, and Ternak runs off. As Johnny and Medusa seek shelter in the snowy mountains, they’re contacted by an elderly yeti (?), who fills them in. The yetis were discovered by monks in a nearby monastery, who tamed them and educated them. When the monk elder died, Ternak rose to power and overthrew the humans. 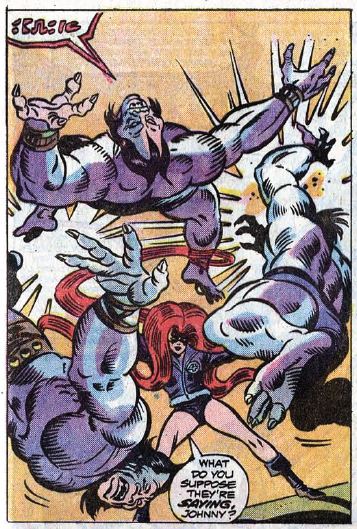 Ternak then finds Johnny and Medusa, taking them captive. Johnny escapes Ternak’s ice prison and… fighting! They battle their way through all the yetis to Ternak, who blasts them with an ice cannon. He says the yetis need extreme cold to survive, so he’ll freeze the entire Earth, allowing the yetis to conquer the planet.

Issue #146: The ice cannon doesn’t work on Johnny, what with his fire powers and all, so he breaks free and fights more yetis. Medusa damages the cannon, then she and Johnny flee deeper into the frozen underground caves. There, they are approached by a mysterious elf-like woman who leads them deeper underground. At the mountaintop, the yetis discover the downed plane and accidentally fire the FF’s emergency flare. Back underground, the mystery woman leads Johnny and Medusa to the monk’s elder, who is being kept alive in a high-tech “entropy globe.” He gives them a device that he says will stop the ice cannon permanently.

Johnny and Medusa return to the yetis for more fighting. They’re joined by Ben, who was looking for them and saw the flare. Medusa uses the elder monk’s device, which transforms the yetis so they can live in normal temperatures instead of just in cold. This somehow negates their ability to overthrow the world. The elf girl (who, to my knowledge, is never given a name) thanks our heroes and sends them on their way.

Issue #147: Ben, Johnny, and Medusa return to the Baxter Building to find Reed even more depressed than ever. Sue has sent him official divorce papers. Ben takes off on that flying cycle thing, traveling with Johnny to Pennsylvania to confront Sue about this, when he’s attacked out of nowhere by Namor the Submariner, who’s now sporting his cool new black suit. Powered by the water from a nearby lake, Namor knocks out Ben and defeats Johnny with an asbestos net. He then declares, “Sue Richards is mine, now and evermore!”

Ben makes it to the ranch where Sue’s been staying, to learn that Namor arrived and took off with Sue, and that little Franklin has disappeared. Reed, in his despair, invents a doo-hickey that allows him to track Namor’s movements. He finds Namor in the ocean (where else?) and the team flies off in the Fantasticar to confront him. Everybody takes “oxy-pills” to breath underwater, and Johnny wears a “heat frame” to use his powers underwater. Everybody fights, and Reed, in his rage, manages to bring the pain to Namor. Sue then appears, from inside Namor’s undersea palace, saying everyone’s made a huge mistake. She says she an Namor are in love. They’re shackin’ up!

Issue #148: The FF return to the Baxter Building, with Reed more heartbroken than ever. They barely make it back when the Sandman attacks them. He was somehow already in the building, waiting for them. After several pages of fighting, Sandman escapes to one of the building’s lower floors, to where the rest of the Frightful Four are waiting.

More fighting! The Wizard defeats Reed and Medusa with his anti-grav discs. Paste-Pot-Pete, um I mean the Trapster, fights Johnny with his glue gun, and Sandman and Thundra take turns beating up Ben. Thundra continues her personal grudge against Ben, wanting to defeat him to prove herself as better than any man. The FF regroup, using the Frightful Four’s own weapons against them, apprehending the three guys and making a temporary truce with Thundra. At that moment, outside, Namor arrives in New York with an army of sea monsters, declaring war on the surface world. Oh, and Sue is with him.

Issue #149: Namor says he’s attacking to seek revenge on Reed for putting Franklin in a coma. Medusa stays behind while Reed, Johnny, Ben, and Thundra fly off in the Fantasticar to confront Namor. Namor and his sea monsters battle the Army and the NYPD, and then the FF. Namor beats up Johnny real good, and Sue gets into the fight by destroying the Fantasticar with her force fields. Namor then unleashes Giganto (the whale monster from FF#4) onto the city. Ben fights Giganto and the other monsters while Thundra fights Namor, chiding him the whole time for his being a no-good male.

In the midst of the battle, Ben and Sue have a heart-to-heart. Ben says Reed still loves Sue, and a teary-eyed Sue wonders if she is wrong about him. Reed steps in for Thundra, about to fight Namor to the death, but Sue breaks them up. She says love is not the ideal fantasy, which is what Namor offers, but love includes all the mistakes and “injuries” that come with a relationship. Sue and Reed kiss, so they’re a couple again. Then, secretly, Namor meets with Medusa and the Inhuman Triton, revealing that this whole thing was a ruse to get Sue and Reed back together. Tell that to all the New Yorkers whose buildings you just knocked over.

Unstable molecule: Reed is so broken up over Sue that he faints while flying the Fantasticar. His willingness to fight for Sue helps her come back around.

Fade out: I really want to see a retelling of this story from Sue’s point of view. She seems truly devoted to Namor before switching sides again.

Clobberin’ time: There’s a reference to Ben getting stronger, as he says he can lift 200 pounds more than he could before.

Flame on: I have no idea how Johnny’s “heat frame” allows flames to exist underwater, but there you go.

Fantastic fifth wheel: Medusa’s role on the team seems to be moral support. When everyone else is wracked with their angst, she’s the one who brings them back together, even if underhandedly. Also, Thundra fighting alongside our heroes in #149 is enough to earn her a spot on the list of FF alternate members.

Four and a half: So… where is Franklin? One panel says he’s with Namor and Sue in Atlantis, but another says Franklin vanished without a trace.

Fantastic or frightful? These comics still aren’t great, full of plot-hole writing and clunky art, but it’s nice to see a happy ending for once. Let’s call this batch of issues a mixed bag, then.