Re-reading the Fantastic Four comics from the start. Time for more mediocrity from the “middle years,” after Jack Kirby but before John Byrne.

Issue #150: This “anniversary” issue is a double-sized one, with two stories. The first is a continuation of the story that began in Avengers #127, with the FF and the Avengers battling Ultron. Not just any Ultron, but Ultron-7, who is disguised as Omega, who… I have no idea what’s going on. I don’t have the Avengers issue, so I can’t tell you what the 7 is for or why a killer robot feels the need to disguise himself as leader of the Alpha-Primitives. The gist of it is that everyone’s fighting Ultron. What’s important is we learn that Franklin has been with supernatural nanny Agatha Harkness since issues #148-149. She and Franklin are present at the battle, where Franklin comes out of the coma he’s been in since #141 and uses his reality-breaking super powers to defeat Ultron. 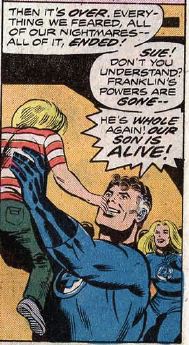 The second story has the FF travelling to the Inhumans’ secret city for the wedding of Crystal and Quicksilver. The Avengers are also invited. There’s no villain to fight, so instead we get a bunch of little character moments leading up to the big event. Reed and Sue reminisce about Dr. Doom attacking during their wedding. Iron Man pines for Pepper, and Thor ponders his love triangle with Sif and Jane Foster. Johnny says he thought he was over Crystal, but feels like his heart is breaking all over again. Medusa reminds him that Crystal loved him once, and Medusa promises to stay by his side for moral support. Crystal and Quicksilver, who don’t get speaking parts in their own wedding issue, are married and everyone’s happy at the end. 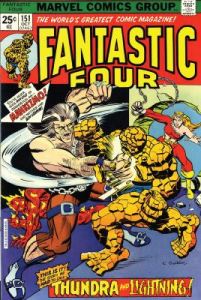 Issue #151: Johnny and Ben are out clothes shopping (!) when a strange electrical storm hits the Baxter Building. It’s coming from a big buff dude named — wait for it — Mahkizmo! He’s there looking for Thundra.

Elsewhere in New York, Thundra and Medusa are talking, as Thundra fills us in on her origin. She traveled here from the future, when the Earth is ruled by female “Femizons.” Mahkizmo was leader of the rebellion, so Thundra was sent back in time to defeat the world’s most powerful men, which will quell the rebellion in the future. (So it’s gender-flipped The Terminator.) Ben and Johnny fight Mahkizmo, whose strength comes from nuclear power. Reed joins the battle, only for Mahkizmo to throw him off the roof for the big cliffhanger.

Issue #152: Thundra saves Reed’s life, admitting that he’s not scum like all the other men. Thundra and Mahkizmo fight each other, while Reed tinkers with Dr. Doom’s old time machine, which Reed still has in his lab, in the hopes of finding a solution. There’s a lot of talk about travelling “sideways” through time rather than back or forward.

The FF travels to Thundra’s timeline to find Mahkizmo’s men attacking the Femizons. Everybody fights, and Mahkizmo takes the FF hostage. Medusa escapes, and returns to the time machine, taking off by herself. This leaves the rest of the FF stranded, wondering if she’s become a traitor. 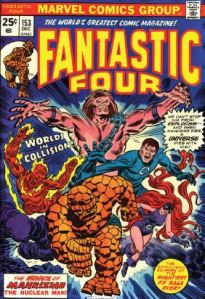 Issue #153: The FF escape from Mahkizmo’s prison, but he hits them with a “domina-ray” that saps their will to fight. (Why didn’t he do that to begin with?) Mahkizmo and the rest of the rotten no-good men put our heroes into a gladiatorial arena, along with Thundra (I guess this is “sideways future Thundra”) where the battle a giant alien monster. Mahkizmo joins them in the ring for more fighting. Medusa returns, as she hadn’t betrayed anyone, but instead recruited help from the Femizons. 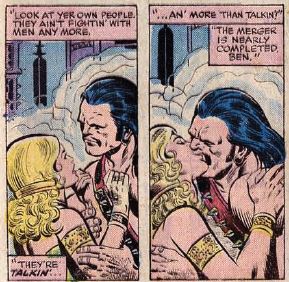 Thundra and Ben manage to defeat Mahkizmo by putting aside their rivalry working together. With Mahkizmo gone, all the Femizons and the rotten no-good men not only stop fighting, but they all start kissing! This restores the “natural balance of power” which returns the FF and Thundra back to their own timeline.

Issue #154: A mystery man in a green mask attacks the FF as they’re flying over New York in the Fantasticar. Right after this happens, Johnny has a flashback to first time he met this mystery man, which reprints one of the old Human Torch comics from Strange Tales #127, from back in 1964.

In the old story, it was Reed in the green mask, testing his teammates’ loyalty. Back in the present, it’s Nick Fury in the suit, trying out a bunch of new S.H.I.E.L.D. weapons. Lame fill-in issue.

Issue #155: After fending off a mugger in the park (!) the FF are attacked out of nowhere by the Silver Surfer. The Surfer declares that he and the FF are no longer friends.

After a lot of fighting, the Surfer comes to his senses, and he tells the story about how he temporarily lost his cosmic powers, and then saw a poster of his former love, Shalla Bal, on a wall in some small village. He followed the clues to Dr. Doom’s castle, where he saw Shalla Bal in a window. Shalla Bal acted like she didn’t know him. Dr. Doom said Shalla Bal is now married to him (!), but he’ll restore her memories and give her back to the Surfer if the Surfer agrees to kill the FF. Back in the present, after explaining all this, the Surfer attacks the FF again.

Issue #156: Just as the Surfer is about to kill the FF, he stops, saying that he cannot take a life. The FF and the Surfer travel back to Doom’s castle. Some device in Doom’s armor mesmerizes the FF so they’re frozen in place. Doom and the Surfer fight, but Doom has the upper hand, because he still has Shalla Bal. He puts the FF in a bunch of traps designed to negate their powers.

Doom and his henchman Daedalus continue to parade Shalla Bal in front of the Surfer, hoping to use the Surfer’s frustration for their own evil purposes. The FF escape from their cages, by breaking each other out instead of concentrating on their own traps. They storm the castle, and Doom sends his “death-dealing humanoids” out to fight them. While they battle, Doom continues to spy on the Surfer, revealing that he’s slowly draining the cosmic power away from the Surfer.

Issue #157: Doom channels the Surfer’s powers into a giant new android called the Doomsman. The Doomsman fights the FF as they continue to tear through the castle. Shalla Bal tells the Surfer that she has no memories before her marriage to Doom. When she calls him by his real name, Norrin Radd, he believes her memories are returning. This immediately leads to them kissing. She then withdraws, her real memories coming back. She’s not Shalla Bal, but a peasant girl made to look like Shalla Bal, with her memories replaced by one of Doom’s machines. It was all to trick the Surfer.

The Surfer helps the FF beat the Doomsman, and then they fight Doom himself. The peasant girl, whose name is Helena, manages to stop the fighting, saying that if they destroy Doom’s castle they’ll be destroying her country’s priceless historic artifacts along with it. Because it’s a stalemate, Doom lets the FF and the Surfer leave. Then, strangely, we get a scene in Hell, where Mephisto (the Marvel Universe’s version of the Devil) brags about how Helena actually is Shalla Bal, though she doesn’t know it. Mephisto put her on Earth and wiped her memories as a cruel jest against the Silver Surfer. Bummer, man.

Unstable molecule: During the fight through Doom’s castle, Reed stretches to an almost liquid-like form to get from one room to another, saying if a breeze can get through a crack in a wall, so can he.

Fade out: Although Sue and Reed are a couple again, she’s not back on the team. She’s staying home with Franklin, leaving the superheroing up to Medusa.

Clobberin’ time: Thundra has gone from hating Ben to being so taken by him that she actually kisses him on the cheek.

Flame on: Johnny says his shopping excursion with Ben is a chance for them to become better friends. Bromance!

Fantastic fifth wheel: One scene has Medusa being pursued by reporters, and this somehow reminds her that she’s not human, and still very much an outsider.

Four and a half: Not only is Franklin out of his coma, but he has lost his reality-breaking super powers. How Reed knows this is never made clear.

Commercial break: I sure hope Marvel Studios secured the film rights to Man-Gods From Beyond the Stars.

Trivia time: Marvel published Giant-Size Fantastic Four during this time, but I won’t be covering them on this blog because you’re not missing anything. Madrox the Multiple Man made his first appearance, but other than that you’ve got the FF fighting bottom-barrel villains like the Horsemen and Tempus. Giant-Size Fantastic Four ran for only four issues before getting itself cancelled.

Fantastic or frightful? Another total mess. The Thundra/Mahkizmo stuff should be good for a laugh, but the time travel aspect of it was rushed and confusing. Ditto the Dr. Doom plot, which is a confusing Silver Surfer story guest-starring the FF.

Next week: Back to basics.