What’s goin’ down: It’s the dead of winter, and everyone’s freezing cold. Hanson and Penhall are undercover among a cult of “leftist radical neo-communists” (!) suspected of blowing up their school newspaper. The follow one of the suspects to Miami, just in time for Spring Break (!!!). The guy’s searching for his long-lost girlfriend, who’s part of some “mission.” Too bad that Hanson is the one who ends up pining for her.

“If you’re a communist, shouldn’t that be a red bikini?”

Here’s Hanson: This episode is a look at Hanson’s character development in microcosm. He begins as the goody-goody cop, describing Spring Break as his personal hell. Later, though, he discards all the rules and questions his loyalties after falling for the girl.

Penhall’s prerogatives: The writers finally remembered that Penhall got married a few episodes back, and there are a couple of scenes with Penhall bemoaning the fact that his wife was deported back to El Salvador. That subplot will become plot in the next episode.

Undercover blues: Turns out there was no bomb, and the “mission” is merely getting the suspect back together with his girlfriend. They’re not even real neo-communists, they said that to tick off their parents. Those crazy kids! 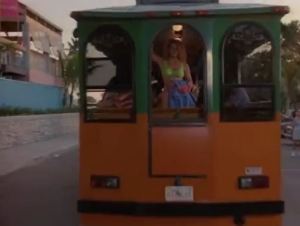 Goin’ to the chapel: With no heat in the Jump Street chapel, Ioki and Hoffs are freezing to death while their fellow cops are in Florida. Captain Fuller makes things right by decorating the place to look like a tropical paradise once the heat is fixed. 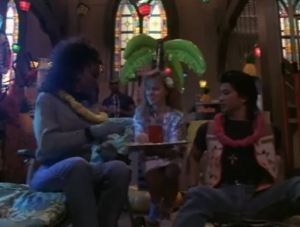 Torn from today’s headlines: I’m assuming all this “neo-communist” stuff is a reference to something specific. I tried Googling “leftist radicals” which took me to all kinds of interesting internet back alleys.

“Even I can’t make it to the end of Pink Flamingoes.”

Trivia time: Lots of familiar faces in this one. Legendary filmmaker Jon Waters, fresh off of working with Johnny Depp in Cry-Baby, has a cameo as the creepy cult leader. The suspect is played Shawn Levy, who went on to direct Real Steel, Date Night, and The Internship. Also, Hanson makes a joke about finding the Fountain of Youth, something Johnny Depp would later do as Captain Jack Sparrow in the fourth Pirates of the Caribbean movie.

Next week: South of the border.