Re-reading the Fantastic Four comics from the start. We’re still in the “Middle Years,” after Jack Kirby but before John Byrne. The thing about superhero team books is that, every once in a while, the writers can take one member of the team and give them a solo adventure. That’s where we find our heroes in this bunch of issues. 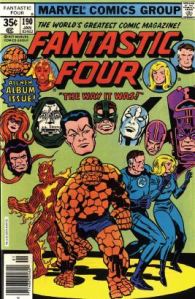 Issue #190: So the Fantastic Four have officially broken up, and everyone’s gone their separate ways. Ben is staying with Alicia (sleeping on her couch, it’s implied).

Ben and Alicia have an issue-long heart-to-heart where he reads from his diary (!) so we get an entire issue of flashbacks to previous FF adventures. It’s like a “clip show” but with all-new art. Ben destroys the diary at the end, saying he’s never going back to the FF. 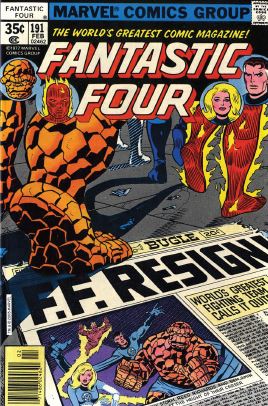 Issue #191: Continuing with the breakup drama, Reed is dismantling his lab with the help of S.H.I.E.L.D. Agent Parnival. The landlord, Collins, is still threatening a lawsuit, and mailman Willie Lumpkin makes his since-forever return for a teary-eyed goodbye. Sue gets offered a part in a Hollywood movie, and Ben chews out some reporters who think the breakup is his fault.

Parnvial’s workmen try sneaking some vibranium out of the lab, and Reed stops them. Turns out Parnival is really a supervillain named the Plunderer. Reed gets knocked out, but not before firing the team’s “4” flare into the sky. Reed, Sue, and Johnny come running, as Ben declares, “The Fantastic Four are back!” Then of course we get several pages of the FF fighting the Plunderer’s henchmen, and the Plunderer is actually pretty capable, with gadgets on hand able to counter the FF’s powers. Reed, although he still has no powers, manages to outsmart the Plunderer and punch him out. Reed says the breakup is still on, and he puts a “Now renting” sign in front of the Baxter Building. 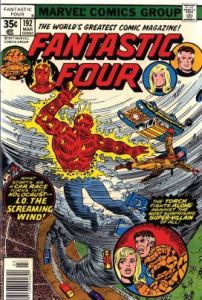 Issue #192: Johnny has traveled out West, where he reunites with his Native American pal Wyatt Wingfoot. Here’s there to participate in a cross-country road race. Johnny flirts with rival racer Rebecca Rainbow, and he’s being spied on by a mystery man going by “Agent T,” spying on Johnny and reporting an unseen employer. In a subplot, a wealthy man named Arthur Thornhill offers Reed a position in his company. 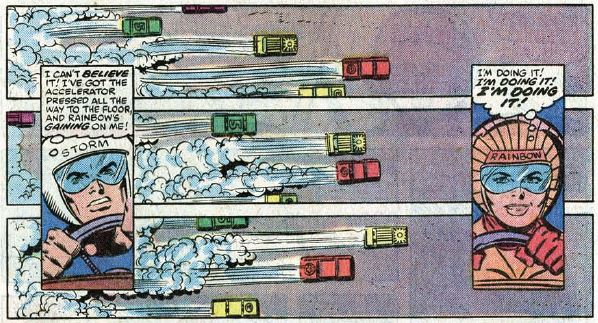 The big race begins, only to have everyone attacked by the Texas Twister, whose wind powers are a good match for Johnny’s fire powers. With Wyatt and Rebecca’s help, Johnny manages to defeat the Twister. The race promoter, Thaddeus Longhorn, is so thrilled by all the media attention from this that he offers Johnny a lucrative new job. 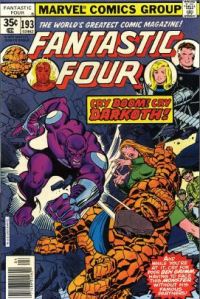 Issue #193: Ben has offered his “services” to NASA. He’s there when the place is attacked by Darkoth the Death-Demon. (Darkoth, remember, was a guy experimented on and turned into a monster by Dr. Doom.) Darkoth and Ben fight, only for Darkoth to escape. Ben is there to test fly NASA’s new “Solar Shuttle.” That night, he gets an anonymous phone call saying the shuttle has been sabotaged. 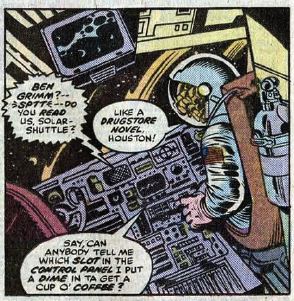 Ben meets with the NASA colonel who tells him that Ben’s old flying buddy Desmond Pitt is wanted as a traitor. Ben is upset to hear this, because Pitt once saved his life. Cut to Darkoth, who reveals that he’s been Desmond Pitt all along. He’s hiding out with Diablo, the master of alchemy, who has Darkoth under his control. (Good lord, this is a lot of plot.) Ben takes off in the Solar Shuttle, and things seem to go smooth at first, but then he gets trapped in an energy field. Diablo has trapped the shuttle, but Darkoth helps set it free. Ben tries to land the shuttle, only for it to crash in a fiery explosion. 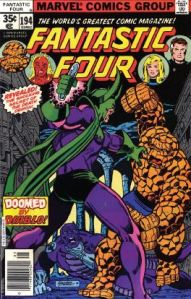 Issue #194: Everyone thinks Ben is dead, but we wakes up in the middle of a desert. In his hideout, Diablo speechifies a long-winded explanation for how we returned from the future, where he was banished in an issue of the generically-titled Marvel Super Heroes comic, and then got Darkoth to work with him by drugging him, basically. Diablo sends Darkoth out into the desert to attack Ben. They fight for several pages, until Darkoth finally reveals that he’s really Ben’s old pal Desmond Pitt. 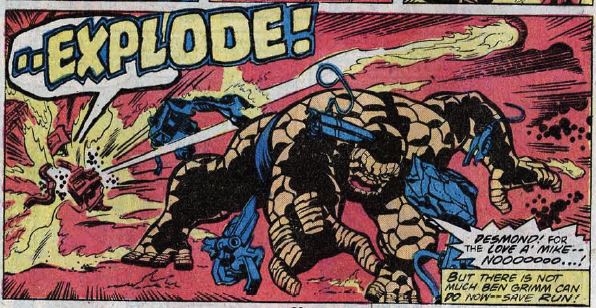 Ben finds Diablo’s hideout and they fight. Darkoth catches up to them and switches sides, destroying Diablo’s equipment. Darkoth sacrifices himself to stop Diablo and save Ben. The NASA guys find Ben in the desert, and he mopes about how Pitt saved his life yet again. 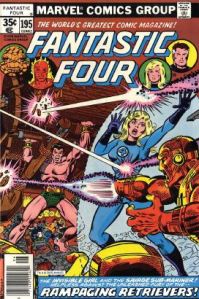 Issue #195: Sue is on her own, in Hollywood, making a blockbuster movie. Impossible Man has followed her there, for no reason. A publicity guy escorts Sue to a room where Namor the Submariner is waiting for her. (Strangely, he actually still owns the movie studio he ran way back in issue #9!) Namor says that although he has once again become king of Atlantis, he feels alone. The Atlanteans started worshipping him as a god, so he fled.

The next day, on set, filming is interrupted when a bunch of robots attack. They are the Retrievers of Atlantis, and they’ve come to take Namor back home by force. Sue and Namor fight back, and Sue figures out one of the robots is the power source for all the others. She knocks that one out, and they all go down. Namor flies off, saying he can no longer forsake his heritage. Sue wishes him the best. 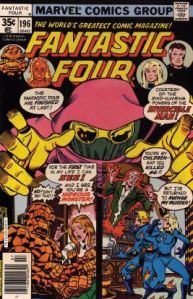 Issue #196: Reed has started his new job, working on a top-secret science experiment. At night, he has nightmares about killing his former teammates. Turns out that while Reed sleeps, he’s being monitored by a Dr. Hauptmann. (Longtime readers might remember that name.) In Hollywood, Ben and Johnny pay Sue and Franklin a visit. Sue says she’s worried because she hasn’t heard from Reed. They’re secretly being watched by a masked man outside their window. 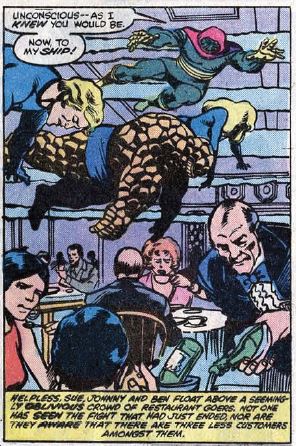 Sue, Ben, and Johnny go out for dinner at the Brown Derby (because it’s Hollywood!) where they experience strange hallucinations. The visions are caused by the Invincible Man (who, way back in issue #32, was really the Super Skrull in disguise). With the heroes mesmerized, the Invincible Man takes them captive and transports them to New York. His boss reveals that the Invincible Man’s new identity is… Reed Richards! Reed is under mind control, and has no idea what he’s done. 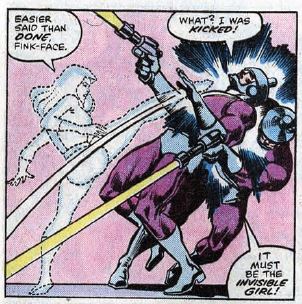 Sue, Ben, and Johnny are affixed with devices that cause them pain if they try to use their powers, so Reed cooperates for now. His new boss, whose name is not revealed, shows Reed a special solar chamber, filled with mirrors used to capture solar energy. Sue uses her force fields to undo the devices, and the FF break free. They fight their way through a bunch of robot guards, only to discover the real mastermind behind all this is… Doctor Doom!

Unstable molecule: Reed is dissatisfied with his new job, because it’s continuing someone else’s work and not creating new ideas of his own.

Fade out: We’re never told just what movie Sue starred in, but based on the costumes, it was some sort of Robin Hood/Three Musketeers type of thing.

Clobberin’ time: While at Alicia’s, Ben gets a ticking package in the mail. It’s not a bomb, but a retirement watch — another gag gift from the Yancy Street Gang, something we haven’t seen in this book in ages. Also, Ben’s past as a test pilot is prominent in the plot.

Flame on: Johnny’s love of race cars makes a return. He still pining for Frankie Raye in one issue, but then gets a new potential love interest in Rebecca Rainbow in the next. We’ll circle back around to Frankie soon enough.

Four and a half: For most of these issues, Franklin is being baby-sat by supernatural nanny Agatha Harkness. Why did they hire her again, after all the times she’s abducted the kid?

Commercial break: I’d estimate that about one out of every five ads in these issues is peddling Star Wars merchandise: 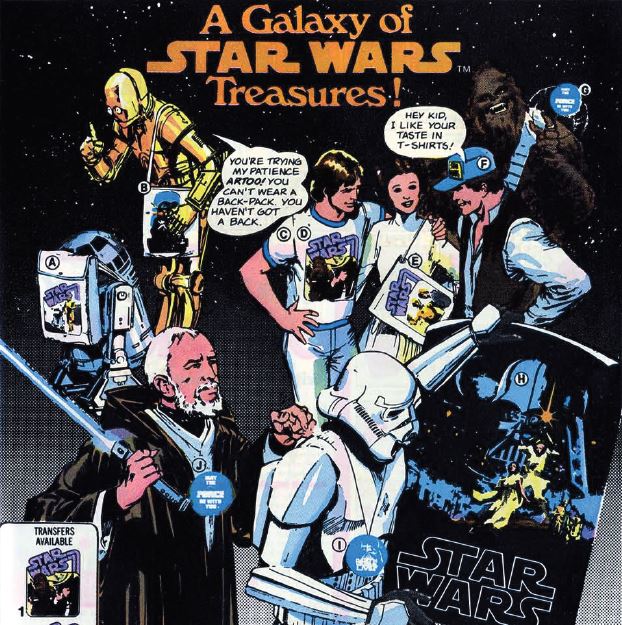 Trivia time: The Marvel Wiki informs me that Rebecca Rainbow previously appeared in Marvel Two-In-One #8, a.k.a. the “Ghost Rider Christmas” issue. There is an unnamed Native American woman in that story, but I don’t see anything connecting that character to this one.

Fantastic or frightful? This is actually a fun batch of issues! Giving each character a solo tale offers some great character development, and it gives the creators a chance to do something different. A definite improvement over all the clueless wheel-spinning of previous issues.

Next week: The big two-oh-oh.