Rewatching 21 Jump Street! Here it is folks, the final episode of the original 21 Jump Street. Oh sure, they tried to keep it going with a fifth season in syndication with a bunch of new characters, but it wasn’t the same show. More to the point, this is our farewell to Officer Tom Hanson, who was our entry into this world back in the first episode. Here’s the last episode of season four, “Blackout.”

What’s goin’ down: Our cops are undercover at a high school built on cheap land out in the middle of nowhere. There’s a blackout during a huge storm, allowing the jocks suspected of assault to run wild inside the school.

Here’s Hanson: Hanson’s barely in this one, just doing the cop thing, but it’s his final appearance so let’s take a look at just how his journey over the series has gone. In one early scene, he plays a prank on the mean kids. The Hanson of the first episode was too serious and straight-laced to pull pranks. This humor and free-wheeling part of himself is what he gained from his time at Jump Street. At the end, Hanson takes a punch before pulling out his badge, doing so without saying a word. From this, we can speculate that although he’s still the cop, maybe he’s ready to move on, as he hinted at earlier this season.

Penhall’s prerogatives: Penhall is undercover as the school coach rather than a student, pretty much admitting that the guy can’t pass as a teen anymore.

Undercover blues: Penhall tries to be the voice of reason once the power goes out, while Hoffs tries to reach a girl and boy whose romance is caught up in the midst of the bad kids’ violent rampage. 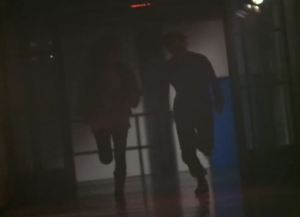 Tilting the camera makes everything scarier.

Trivia time: The fifth season suggests that Hanson went on to own his own bowling alley, calling back to his love of bowling from earlier seasons. He later reunites with Penhall to do undercover work for the DEA.

Although the last episode of season four, this episode was included on all the season five DVD sets, so producers could have an excuse to put Johnny Depp’s mug on the cover.

This shot is the last we see of Johnny Depp on this show. That’s him on the right. Look how thrilled he is to be there.

Jumpin’ or not? This one has a fun horror movie vibe, with a dash of Assault on Precinct 13 thrown in. It’s not the final farewell that fans might hope for, but it’s a fun hour of TV nonetheless. It’s jumpin’!

Next: One last jump.