Fantastic Friday: They grow up so fast

Re-reading the Fantastic Four comics from the start. As much as I love the work of writer-artist John Byrne, I must admit issue #245 is something of a head-scratching puzzler.

We begin with several pages of Sue being interviewed on television by “Barbara Walker.” Walker gives Sue a lot of crap for not being feminist enough, but Sue won’t have it, standing up for herself and even using her force fields to throw Walker around the room. During the interview, the FF’s emergency flare goes off over the city, but the producers don’t interrupt the taping. Sue returns to the Baxter Building to find all the lights out.

Sue makes her way into the building, which is still under repairs from Terrax’s attack in the previous story arc, and finds Reed and Ben knocked out cold. Johnny is fighting a man who has blonde hair and beard. The man cannot be hurt by Johnny’s flame, and throws Johnny through a wall. He then can sense Sue watching them while she’s invisible. The man pursues Sue around the building, able to psychically press against her force fields. Sue finds the destroyed remains of H.E.R.B.I.E. the robot and wonders where Franklin is. Sue confuses the mystery man by turning his hand invisible, allowing her to slip by him. 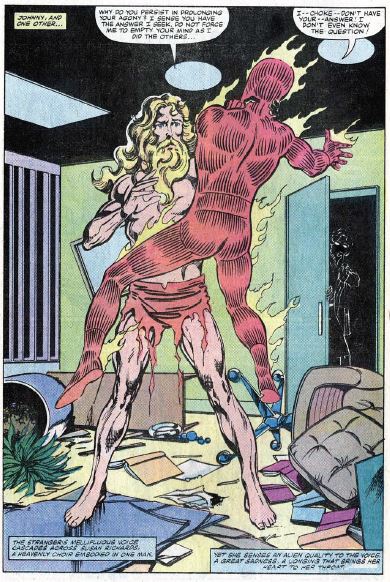 Back at the TV studio, Walker and her team learn that strange things are happening at the Baxter Building, so they rush to the scene in hopes of catching Sue in the act of being subservient to her male teammates. The fight goes out into the street outside, where the mystery man calms down and says he knows Sue from somewhere. Sue looks into the man’s eyes and recognizes him — he’s an adult Franklin! 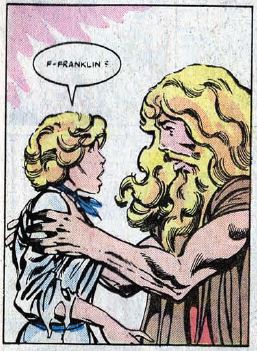 Reed, Johnny, and Ben are back, now joined by Alicia. Franklin is disoriented, and Reed worries that accelerated aging might be killing him. Franklin agrees to go with Reed, but wants to do something first. He offers to make Ben human again, but Ben refuses, saying that he doesn’t trust a five-year-old to attempt that. Franklin looks into Ben’s mind and sees something that alarms him. One look at Reed, and he can tell Reed knows it too. Franklin then transforms Ben from his current retro lumpy form back to his more modern rocky form. 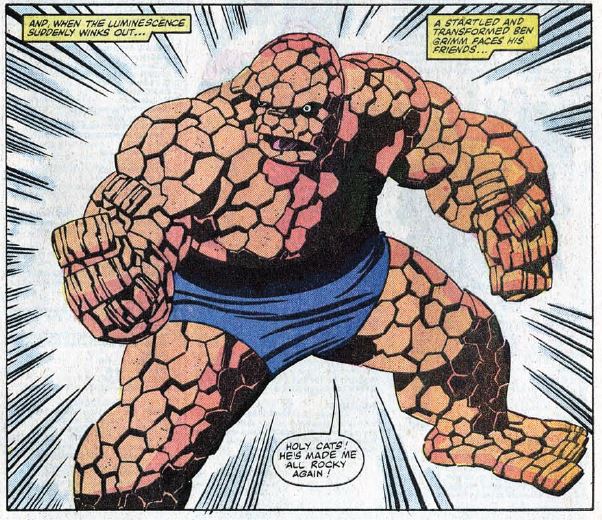 Reed wraps things up with a pair of long-winded explanations. First, Franklin has psychic dampers in his brain regulating his power. He used all of his powers transforming Ben, and now they won’t return until he grows into them. (I think we’re supposed to learn that’s why he turned into an adult in this one.) Second, he says Ben has a mental block that prevents him from turning human again, fearing that Alicia won’t love him if he’s not a monster. With that, the issue just ends.

Unstable molecule: Reed insists on taking Franklin back to headquarters for a detailed analysis of his transformation, but then just deduces what’s going on without any such analysis.

Fade out: Sue creates a soft, cushion-like force field for her to land on when she’s thrown from the building, another new use for her powers. During the interview, she makes a good case for how a woman who’s married and a mother can still kick ass.

Flame on: Johnny survives getting thrown through a wall, which seems impressive until we remember that the Baxter Building is outfitted with those lightweight adjustable walls that can reshape any floor into any layout.

Four and a half: So Franklin’s mutant powers return, giving him an adult body, increased intellect, and the ability to bend all reality to his will. Then, just like that, the powers are gone and he’s an ordinary kid again. When his powers next reemerge, they’ll be completely different. 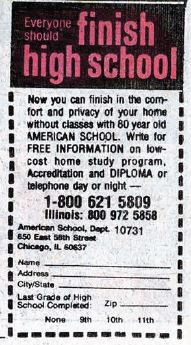 Trivia time: Look closely — one of the TV crewmembers is Sharon Selleck, who we’ll meet properly in a few issues and who will go on to be a kinda/sorta love interest for Johnny.

Fantastic or frightful? Here we have a solo story for Sue, but it’s not really about her. It’s all about Ben and his inner fears, except that this is only addressed in the last two pages. Shouldn’t the whole issue have been focused on that? Turning innocent little Franklin into an unstoppable godlike monster should have been terrifying, but it’s done and undone so fast. On the plus side, it’s awesome to see Sue stand up for herself and fight on her own, and the artwork continues to be top notch.

Next week: All Doom, all the time.