Re-reading the original Sherlock Holmes stories. Holmes’ goose is quite literally cooked in The Blue Carbuncle.

Facts of the case: It’s the day after Christmas. A friend of Holmes comes to him with a hat and a Christmas goose that had been left behind after their owner had been attacked in the street. This small case becomes serious when a rare gem is found in the goose’s belly. Holmes and Watson hit the streets in pursuit of a jewel thief. 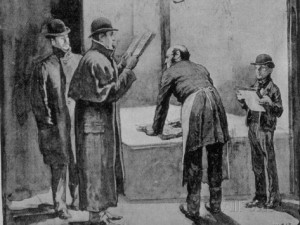 Great detective: Aside from using his observation skills on the missing hat, most of the case is solved by doing the footwork, such as interviewing suspects around the city.

Good doctor: Watson states that the majority of Holmes’ cases have not been crime-related, but merely puzzle-solving around his neighborhood. Hey, just like Encyclopedia Brown!

Who’s at the door: The case is brought to Holmes’ attention by his friend Peterson, a local “commissioner.” There are no more details about who Peterson is or the nature of his friendship with Holmes.

Action hero: One man doesn’t like being asked questions, and threatens to sic his dog on Holmes. Holmes doesn’t back down, though.

Yes, this is canon: Holmes seems to be totally into the Christmas spirit. He’s described as cheerful a few times, and he says he’s in a forgiving mood because it’s the season for forgiveness.

Indubitably: Not one of my favorites. It’s a longer story, but one in which not a lot happens. There are several lengthy dialogues that take forever to reveal what the reader has already figured out. It’s not bad, it just doesn’t stand out. Don’t worry — next week we get some really good stuff.

Next week: Band on the run.