Re-reading the Fantastic Four comics from the start. Who likes ever-increasing stakes? Well, issue #249 has plenty.

We begin with a Star Wars/Trek sequence with a spaceship full of Skrulls blasting out of hyperspace. They’re destroyed by Gladiator, who is totally ticked off for some reason. This is the first time Gladiator has shown up in Fantastic Four, but he had recently been all over recent issues of Uncanny X-Men, where the X-Men were in outer space with the Shi’ar aliens. Gladiator is leader of the Shi’ar’s Imperial Guard, and (as we’re about to see) one of the toughest tough guys around.

Cut to Earth, where Ben and Johnny are enjoying a leisurely stroll through Central Park. They run into Julie Angel, dressed as a clown for a theater/history class project. She and Johnny flirt for a while, and there’s a little bit of action as Ben rescues a little girl on a runaway horse. They’re then called back to headquarters, where Reed has discovered the explosion of the Skrull ship. The explosion would have wiped out the entire solar system, he says, but was contained by a mysterious energy force. Further, an object from the explosion is speeding toward Earth at intense speed. Oh, and we get another one of the those cool cutaways of the FF’s newly-rebuilt headquarters:

The object is (of course) Gladiator, who enters the Earth’s atmosphere and (of course) lands in New York. Gladiator yells in an alien language, and we readers don’t get a translation. Ben confronts him, and the fight starts. They’re in the middle of NYC gridlock, so Gladiator is throwing around cars, and punches Ben through a bunch more cars. Stunned, Ben says he’s never been hit that hard. Gladiator then throws Ben at the Baxter Building, where Ben passes out. Gladiator then rips up part of the Baxter Building, threatening to topple the entire structure. Johnny attacks, and discovers that Gladiator can fly and is impervious to Johnny’s hottest fire.

Reed busts out his universal translator, and we get a partial explanation of what’s going on. Gladiator believes the FF are Skrulls in disguise, and that the Skrulls have launched an attack on the Shi’ar Empire. He uses his awesome strength to stretch Reed to his limit, and then nearly punches through one of Sue’s force fields, knocking her unconscious with psychic feedback. Little Franklin tries to stand up to Gladiator, but is lightly swatted aside.

Ben wakes up, and throws Gladiator out of the building and back out onto the street. Gladiator beats the crap out of Ben, picking up a school bus and smashing it over Ben’s head. Then Gladiator hears someone speaking in his language. This time we get the translation, with someone saying he hasn’t won yet. It’s… the X-Men! Cyclops, Storm, Colossus, and Nightcrawler swear that Gladiator might have defeated the FF, but not them. 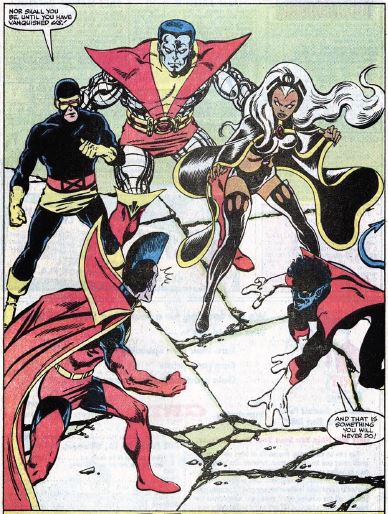 Fade out: When Sue traps Gladiator inside one of her force fields, she says his strength matches that of the Hulk, whom she also once trapped in a force field.

Clobberin’ time: Ben ponders whether he’s gotten too used to being a monster after seeing Julie intimidated by him. After saving the little girl, her hot mom plants a kiss right on Ben’s lips. (Wha-hey!)

Flame on: If we couldn’t consider Julie Angel a love interest for Johnny before, we sure can now, as they’re really flirty with each other. During the fight, we see that Johnny can now focus his super-hot nova flame into a controlled, concentrated burst.

Four and a half: Franklin tries to his mutant powers against Gladiator. It doesn’t work, because of the mental blocks keeping the powers in place.

Trivia time: Many people theorize that this is John Byrne’s attempt at doing a Superman story in an FF issue. Byrne later recreated this issue’s cover in the post-crisis Superman #8.

Fantastic or frightful? You can call it Fantastic Four vs. Superman fan fiction if you want, but I love this issue. Byrne does a great job of selling Gladiator as a truly unstoppable force, one who mows down our heroes without breaking a sweat. Add to that a killer cliffhanger, and you’ve got yourself an intense, action-packed comic.