Re-reading the Fantastic Four comics from the start. This is the big 250th anniversary issue, so here come the X-Men (sort of). At the time, writer-artist John Byrne was most well-known for his work on Uncanny X-Men with writer Chris Claremont, so his drawing the characters again in Fantastic Four was a big deal. 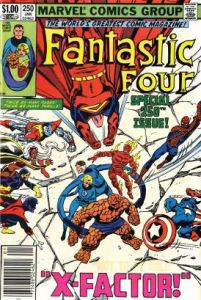 To recap: Gladiator, the number one badass of the alien Shi’ar empire, attacked the FF believing they were Skrulls on the warpath against the Shi’ar. Seeming unstoppable, Gladiator wiped the floor with the FF, only to come face-to-face with four of the X-Men: Cyclops, Storm, Colossus, and Nightcrawler. Instead of picking up where we left off, the comic begins with neither the X-Men nor the FF but with Spider-Man, swinging around New York like he does. He finds Reed stretched out of shape over some rooftops. Reed wakens and reconstitutes himself while recapping the previous issue. Spider-Man takes Reed back to the Baxter Building, recreating Spidey’s first appearance on the cover of Amazing Fantasy #15 along the way: 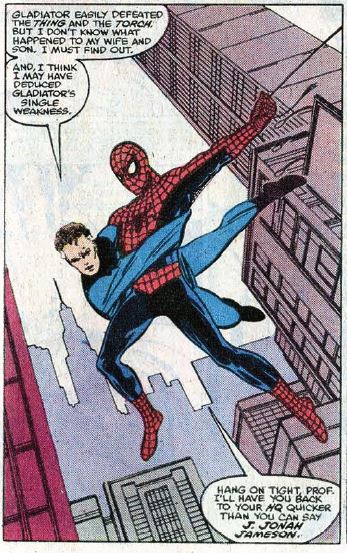 We finally catch up with the X-Men, who threaten Gladiator in Gladiator’s language. Storm and Cyclops attack. Gladiator says he and the X-Men were allies the last time he saw them, and he can’t figure out why they’re after him. Elsewhere, Johnny wakes up in the city streets and finds Ben unconscious. Johnny revives Ben by generating heat without flame. We then cut back to Spider-Man and Reed arriving at the Baxter Building, where Sue explains that Gladiator’s powers against her felt more like a psychic attack than a physical one. Reed says he’s figured out what’s going on. He rushes off the lab while Spider-Man pals around with Franklin a little before heading back out into the city.

As if there weren’t already a ton of characters in this one, we next go to Steve Rogers and Bernie Rosenthal, his girlfriend. Steve sees a ruckus outside, so he ducks out of the lunch date and dons his Captain America uniform, complete with indestructible shield. We rejoin the fight, where Gladiator shows his strength to be greater than Colossus. Storm uses her lightning to “shape the solar winds and from them select radiations of specific wavelengths.” OK… This works, though, striking Gladiator with great pain.

Gladiator goes after Nightcrawler next, only for Spider-Man to swing in and save him at the last second. Nightcrawler, however, flips out and punches Spider-Man, knocking him out. Even more strange, Nightcrawler bares his fangs and goes in to bite Spidey! Captain America steps in, fighting both Nightcrawler and Colossus. Ben wakes up, and he Johnny next rejoin the battle, so now everybody is fighting everybody. Back in Reed’s lab, he and Sue discuss how Gladiator’s power must come from something other than raw strength, and Reed starts working on a device to combat him.

The X-Men’s behavior just keeps getting stranger, as Nightcrawler disappears and fellow X-Man Angel shows up seconds later. He also somehow has Storm’s lightning powers, and he and Storm zap Gladiator with more super-powerful lightning. Angel then fights Johnny, with more superhuman strength than he’s ever had. Cyclops hits Ben with an optic blast, and Ben realizes that the blast burned him. This is odd, because Cyke’s optic blasts are not heat rays. Then we get the big reveal. Cyclops gets impaled on a piece of sharp metal, and reverts back to his original form — he and the X-Men really shape-changing Skrulls!

Reed confronts Gladiator. Gladiator attacks, but this time none of his powers work against Reed. Reed just stands there as Gladiator punches and zaps him, with no effect. As Gladiator experiences a moment of hesitation, he’s knocked out by one of Sue’s force fields. Turns out “Reed” in this scene was really Captain America, made to look like Reed thanks to Reed’s high-tech thought-projector. Gladiator’s attacks were secretly hitting Cap’s shield. Turns out Gladiator’s powers are psychic-based, and giving him self-doubt was all it took to defeat him. 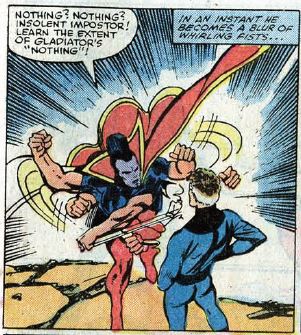 There are still Skrulls to deal with. Ben says that he can really cut loose with his strength knowing it’s a Skrull and not an X-Man, so he beats the crap out of Skrull-Colossus. Johnny deduces that Skrull-Storm and Skrull-Angel are flying by artificial means and therefore don’t have his maneuverability. He makes a 90-degree turn that they can’t, forcing them to crash into a building. Gladiator makes peace with the heroes, taking the unconscious Skrulls with him as he leaves the Earth. All that’s left is for Ben to look around the wreckage and quip, “Who’s gonna pay ta fix all this?” 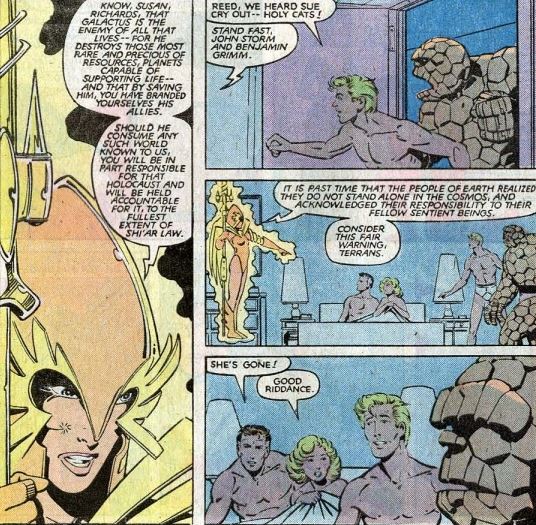 As long as we’re talkin’ X-Men, we have to discuss Uncanny X-Men #167, which took place right after this issue. After the X-Men return from space, Empress Lilandra of the Shi’ar projects a hologram of herself into Reed and Sue’s bedroom in the middle of the night.  She says Reed should not have saved Galactus’ life back in issue #244. Lilandra says that if Galactus ever kills anyone again, she’ll hold Reed personally responsible. Although this scene doesn’t happen in a Fantastic Four comic, it sets up a huge plotline that’ll pay off later on. (It also began a very ugly behind-the-scenes feud at Marvel, but we’ll get to that in time.)

Unstable molecule: Reed’s thought projector device first appeared way back in issue #27, and again in issue #126. It also appeared in one of Johnny’s solo adventures, Strange Tales #126 (same issue number as the FF appearance? What are the odds?) where it was used to help defeat the Puppet Master.

Fade out: A letter writer in this issue says she was working on creating astrological charts for her favorite comic book characters. She insists that Sue is a Cancer with Libra rising, based on Sue’s dual priorities of motherhood and mastery of her super-powers. In response, the editor praises the letter-writer for her accuracy.

Clobberin’ time: The Thing says he’s been on the receiving end of Cyclops’ eye beams before, but I’ve yet to find a specific instance where that happened. If anyone knows, leave a comment etc.

Flame on: Johnny’s never-before-seen ability to generate heat without fire was a minor controversy among fans, wondering how that’s possible. It’s not a power he’ll use often, though Johnny has, historically, not been cold when visiting cold environments.

Four and a half: Franklin calls Spider-Man “Spidey-Man,” after having seen the Spider-Man segments on The Electric Company, which existed in the Marvel Universe just like they did in our world. (In the MU, Spidey gave PBS special permission to use his likeness.)

Commercial break: Strange but true, comic book companies used to play each other in softball during the early ‘80s. Here, Marvel celebrates its win over Warren Publishing by bouncing a ball off of Vampirella’s butt:

Trivia time: Bernie Rosenthal had just recently discovered Captain America’s secret identity, which is referenced in their lunch date in this issue. She was his girlfriend for quite some time, sharing in a number of his adventures. The name Bernie is short for Bernadette.

Fantastic or Frightful? This is an action-packed issue, full of fighting and craziness. Despite the double-size length, the story moves right along, thanks to having so many characters at once. Some might not like that these aren’t really the X-Men, or that it’s the X-Men without Wolverine (unthinkable!) but what really matters is that it’s a grand old slugfest in the classic Marvel style.