Re-reading the Fantastic Four comics from the start. We’re at issue #251, in which writer-artist John Byrne kicks off one of the longest story arcs during his run on the book. I hope you like the Negative Zone, because we’re going to be there for a while. 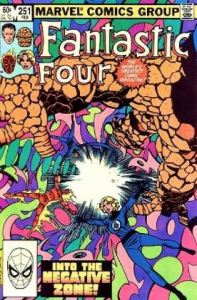 We begin with Reed and Ben looking into a massive tube that extends for one mile inside the Baxter Building. Scratch that, only one meter exists inside the building, the rest of it exists inside the Negative Zone. This is Reed’s new Negative Zone portal, allowing easier access to and from the other universe. Reed says the FF cannot turn their backs on the limitless wonder and potential of the Negative Zone, while Ben argues that the N.Z. is the source of baddies such as Blastaar, Stygorr, and, most of all, Annihilus.

From there, we catch up on a lot of “daily life” stuff for our heroes. Remembering that Reed bought the Baxter Building after the recent fight with Galactus, he and Sue attend and tenants’ meeting. They field complaints about broken elevators, stuck windows, and more. (I thought the lower floors of the building were businesses, since this is Manhattan, but this would have us believe people are living there.) Ben doesn’t want anything to with that, so he takes the Fantasticar for a flight over New York. He helps some cops sort out city gridlock by picking up cars and carrying them around.

Johnny is also flying around New York, before joining his latest love interest Julie Angel. He attends an acting class with Julie and her roommate Sharon Shelleck. There’s a lot of soap opera stuff here, as Julie is also interested in her acting teacher Rolf Brandis and hunky classmate Grey Landers. Sharon, meanwhile, shows much hormonal interest in Johnny. Cutting back to Ben, he’s hanging out with Alicia. He again worries that she doesn’t love him because he’s a monster, and she assures him that she loves him because of his kind, beautiful soul. At the Baxter Building, Sue playfully sneaks up on Franklin while invisible, only to scare him. Sue considers how, now that Franklin no longer has his powers, the Baxter Building is no longer a good place to raise him.

Reed herds the tenants out of the meeting and returns to his lab. There, he tinkers with his new spacecraft, the Negative Zone Exploratory Module Mark I. The others join him next morning when it’s time for the big trip into the Negative Zone. Alicia is there to babysit Franklin and reopen the new portal when it’s time for the FF to return. Reed says the portal contains a time distortion, so that their trip will only be a few hours or even minutes for Alicia’s perspective. Franklin says goodbye to his parents and Alicia says goodbye to Ben. Johnny, all alone, had invited to Julie to be there, but there was no answer at her place that morning. The FF climb aboard the module, with much description about how it works. The ship launches, travels through the portal and into the psychedelic distortion area, and from there into… the Negative Zone!

Two hours later, Alicia, while alone with Franklin, gets the signal that the FF have returned. She returns to the lab, only to discover that Annihilus, not the FF, has come through the Negative Zone portal. He says the Fantastic Four are gone forever and now begins his reign. 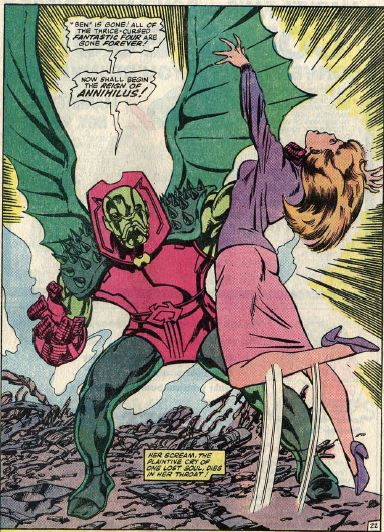 Unstable molecule: Reed says he will have his lawyers deal with the tenants. I’m not sure we’ve ever seen these lawyers.

Fade out: Sue says that Franklin was always able to see her when she was invisible, up until recently.

Clobberin’ time: Ben reminds Reed (and the readers) that he has an equal 25 percent ownership of Fantastic Four Inc. He later wonders how the Avengers deal with their finances.

Flame on: Johnny flames off into his regular street clothes instead of his FF uniform, so those clothes are made of unstable molecules as well. Johnny hasn’t shown much interest in acting before this, so I think we can surmise that he’s there more for Julie than for any love of theater.

Four and a half: Franklin can be seen playing Star Fox on the Atari 2600.

Trivia time: This is allegedly the first mainstream comic to call a character “gay” in reference to homosexuality, when Julie says actor Grey Landers is “probably gay.”

Fantastic or frightful? I imagine this issue divides people. It’s all character-based stuff with no superhero action. It’s also all set-up for the next eight issues or so. The biggest complaint is that they’re going on this big Negative Zone adventure for no reason other than because they can. Still, there’s a lot to enjoy here, and it does make you excited for what’s to come.

Next week: A new perspective.