Re-reading the Fantastic Four comics from the start. Writer-artist John Byrne’s run on the title is often described as experimental, and this issue is a big reason for that. The entire issue is drawn “calendar style,” meaning you have to turn the comic on the side to read it. Because this is our heroes’ first adventure in their multi-issue Negative Zone exploration, the sideways thing speaks to this being in another universe now. 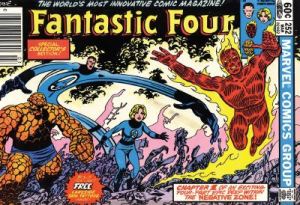 We begin on a planet in the Negative Zone where an alien woman, Taiya, is an outcast among her primitive tribe. The chief’s son, Tannar, wants to marry Taiya, but she says she can’t because she’s only fit as “a bride of Ootah.” A strange object falls from the sky and crash lands nearby, so Tannar and the rest of the tribespeople investigate. It’s the Fantastic Four, landing on the planet in their exploratory module. 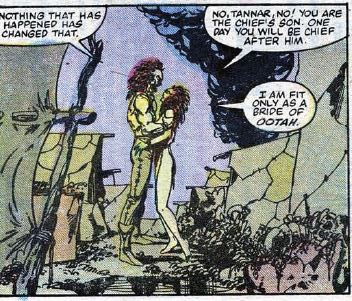 The FF starts setting up their science equipment when Reed is struck by a poison dart. There’s a brief fight with the natives, who are no match for the FF’s superpowers. The fight is interrupted by Mama Shonti, the tribe’s shaman-like figure. (We never meet the aforementioned chief.) Reed is in a temporary coma due to the poison, and Mama Shonti gives us the backstory. The people once lived in a gleaming, futuristic city called Ootah, so huge it covered half the planet. Ootah was so scientifically advanced that it had a living brain controlling the entire place. Then, one night, a strange fear overcame the populace, driving all the people out of Ootah and into the wilderness, where the devolved into semi-primitives. 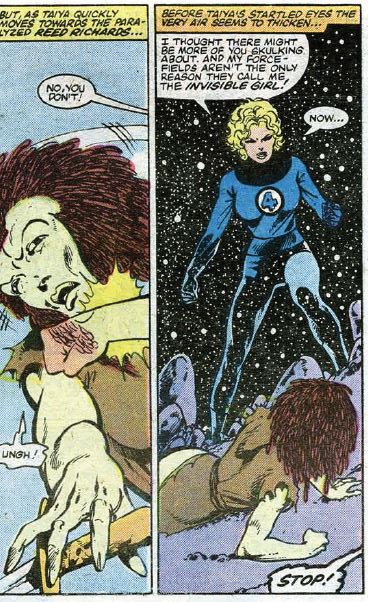 We then cut back to Earth, where Annihilus has escaped from the Negative Zone and is running around inside the Baxter Building. He confronts Franklin and discovers that Franklin no longer has reality-bending mutant powers. Annihilus throws Franklin against a wall (!) and then takes him to Alicia, who is out cold and hanging upside down from the ceiling. We’re left to wonder what Annihilus is up to, only that it’s no good.

Back in the Negative Zone, Taiya is bathed and dressed up to be sacrificed to Ootah. As Johnny and Ben watch, Taiya approaches an entrance to the giant walled city. A laser gun emerges from inside, about to shoot her. Johnny rescues her, but the natives insist that she must be sacrificed. Ben responds by throwing a rock at the entrance, shocking everyone as it is “sacrificed” by the laser. Then there’s some fighting as Ben throws more rocks at the city and Johnny burns its outer walls.

Reed comes out of the coma, while Sue, Ben, and Johnny enter Ootah and find the living brain. Ben destroys the brain, thinking that will stop the attacks on the natives. Reed arrives and says that Ootah was actually alive, a gigantic organism that expelled the natives like a life form expels germs. Ootah is now dead, with the natives tearing it apart like maggots in a corpse, and Reed sadly states that the FF have learned a valuable lesson, that nothing in the Negative Zone is as it appears.

Unstable molecule: The caption tells us that Reed overcoming the poison is “the hardest battle of his career.”

Fade out: During the fight, Sue plays defense, invisibly protecting the unconscious Reed while her other two teammates battle the natives.

Clobberin’ time: Ben is the voice of reason in this one, poking holes in the natives’ superstitions with his common sense. Strange, then, that he’s the one to kill Ootah without considering the consequences.

Flame on: Johnny describes the exploratory module as comfortable, but is the first one out of it to stretch his legs.

Four and a half: Franklin’s parents have taught him all about who Annihilus is, as he recognizes the villain on the spot, and knows how dangerous he is. Annihilus says he can’t use Franklin’s powers for his own gain, adding that it does not matter.

Commercial break: The cover advertises, “Free Lakeside Skin Tattooz.” Here they are, except that they aren’t rub-on tattoos, just the same ink-on-paper as the rest of the comic: 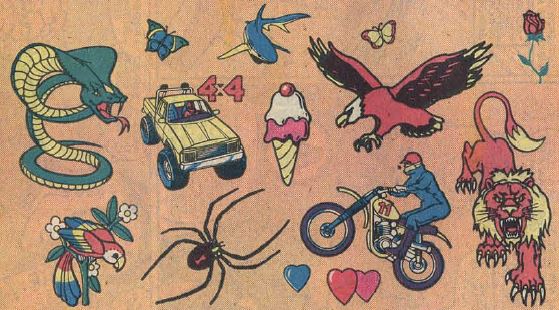 Trivia time: The internet is trying very hard to convince me that Byrne drew this entire issue directly with ink, instead of penciling it first. I cannot find any valid sources confirming this, and it certainly doesn’t look like it to my eyes.

Fantastic or frightful? Like all the stories in the Negative Zone arc, this one is a nice retro throwback to classic late ‘50s/early ‘60s sci-fi, with a little Star Trek and Dr. Who for flavor. It’s bothersome how our heroes are relatively casual about killing Ootah and more or less dooming the primitives. But, the great visuals and novelty of this being a sideways issue make this one a standout.

Next week: Frogs… in… space!