Re-reading the original Sherlock Holmes stories. You want thievery, conspiracy, and murder? The Resident Patient has all three. 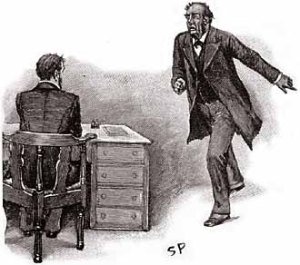 Facts of the case: Holmes and Watson are contacted by a doctor, who recently took on a wealthy patient. The patient began behaving oddly when the doc took on two more patients, and old man and his son. The odd behavior leads to people randomly disappearing and mysterious footsteps left behind. It seems like merely a curious puzzle to solve at first, but then it leads to murder.

Great detective: Holmes begins the story cooped up inside all day while a freak windstorm blows through London. When the storm dies down, Holmes suggests a “ramble” through the city to get some fresh air. 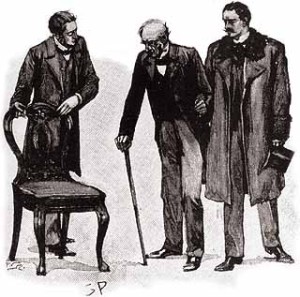 Good doctor: This story is another flashback to Holmes and Watson’s days as roommates. There’s a lengthy paragraph dealing with how Watson deals which of Holmes’ cases to write about, preferring the smaller tales and worrying about results of publicizing those times Holmes got involved with political intrigue.

Who’s at the door: A London police officer named Lanner joins the case. He and Holmes already know each other, and appear to be good friends.

Yes this is canon: While working on his chemistry set, Holmes clumsily breaks a test tube, ruining a day’s worth of work. 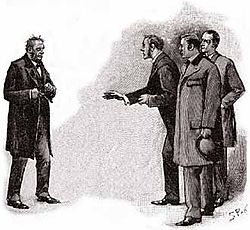 Indubitably: This one is all plot, with very little character moments. Also, it’s another one where it’s enough for Holmes to solve the mystery, with a big question mark over the fate of the killer(s). On the plus side, Doyle’s language really shines at points, especially when describing the horrors of the crime scene. So, I guess I’m torn on this one.