Re-reading the original Sherlock Holmes stories. We’re getting near to the end of this series with Black Peter. Sweet, Holmes fights that goat thing from The Witch. Oh, wait, that was Black Phillip. 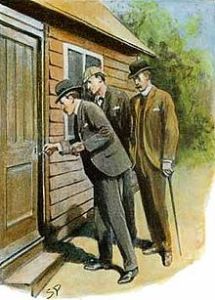 Facts of the case: A man has been killed via harpoon, so of course this is a case for Holmes and Watson. The victim, Peter Carey (known as “Black Peter” because of his great big bushy beard), was a grizzled old sea captain. The clues point to an incident at sea that happened years ago, and who might want revenge.

Great detective: The story begins with a lengthy description of how Holmes is now in the best physical shape of his life, all buff and super-strong.

Good doctor: Watson acts as Holmes’ secretary in this one, taking dictation and running notes to the telegram office.

Who’s at the door: Mrs. Hudson appears in one short scene, answering the door for Holmes and Watson. Holmes’ contact with the police this time is an Inspector Hopkins, who isn’t given much of a personality.

Action hero: Holmes and company stake out the crime scene at night, waiting for a burglar/suspect to return. Later, Holmes wrestles a suspect to the ground to get him into handcuffs.

Indubitably: This story is beloved for its gross death-by-harpoon crime scene, but other than that, it’s pretty much all plot with very little quirky character stuff that Sherlock Holmes is famous for. It’s a lot of people’s favorites, but not one of mine.