Re-reading the Fantastic Four comics from the start. Here’s another one of those wild experimental issues from writer-artist John Byrne. Every page is split horizontally across the middle. The top half of the issue tells the story of Ben’s return to Earth, while the bottom half picks up from last issue, with Reed and Sue being captured by Mephisto. Got that?

First, let’s catch up with Ben. Remember that evil wizard he was tracking on Battleowrld. Turns out the wizard was Ben’s own subconscious, given form by Battleworld’s wish-fulfillment effect. Almost everything he encountered on Battleworld was a figment of his imagination, including barbarian swordswoman Tarianna. With nothing left there, Ben is back on Earth. Meanwhile, as you’ll remember from the last issue, an exorcist named Elspeth Cromwell accused Reed and Sue of witchcraft, only to discover her own supernatural powers were a trick from Mephisto (Marvel’s version of Satan), who took Reed and Sue hostage. (These recap paragraphs are going to get a lot longer as get closer to the ‘90s, won’t they?)

Top half: Ben materializes in Central Park, just like everyone else did when they returned from the Secret Wars. In no hurry to see Reed, he decides the first person he wants to see is Alicia.

Bottom half: Sensing a magical disturbance, Dr. Strange travels to Bell Port, Connecticut, where he immediately deduces that “Reed and Sue Benjamin” are really Reed and Sue Richards, with their son Franklin. Problem is, all three are dead!

Top half: At Alicia’s place, Ben knocks on the door, and a shirtless Johnny answers. Uh-oh!!! They start fighting. Ben assumes that Alicia is just another “skirt” for Johnny, while Johnny insists that it’s more than that, and what he was with Alicia is what he’s been searching for all his life. They explain all this while fighting and trashing the apartment. Alicia shows up and yells “Stop!”

Bottom half: In “a place with no true name” (which is obviously Hell), Sue is being tortured by demons. Reed, who has been embedded in some sort of stone column, stands up to Mephisto, calling him a petty superbeing who uses great power for naught but torture and murder. Mephistro responds by stretching Reed’s face all out of shape. Real horrific stuff here.

Top half: Alicia slaps Ben (though he barely feels it) and says that this is not some tawdry affair, but that she and Johnny are truly in love. His ego severely bruised, Ben steps outside, only to see that the sun has gone out, with a giant black shadow covering the entire sky.

Bottom half: Mephisto turns his attention to Sue, saying that it’s impossible for them to die in his world, which lets him hurt them as much as he wants. To prove his point, he impales Sue on a sharp rock, which doesn’t kill her. (Dang!) He says torturing them makes him more powerful.

Top half: A red planet emerges from the darkness, on a collision course with Earth. A gravity wave all over New York causes buildings to crumble Johnny flies Alicia to the Baxter Building for her safety, as their HQ is reinforced against earthquakes. She-Hulk and Wyatt are there, trying and failing to contact Reed and Sue. Alicia informs them that she and Johnny are a couple, and that Ben has just returned.

Bottom half: Dr. Strange teleports into Hell (he can do that, apparently) only to get zapped by Mephisto. Strange casts a spell of revelation to find Franklin sleeping peacefully inside a crystal. Strange wonders why, seeing as how endlessly torturing an innocent child is right up Mephisto’s alley (Geez, this is dark). 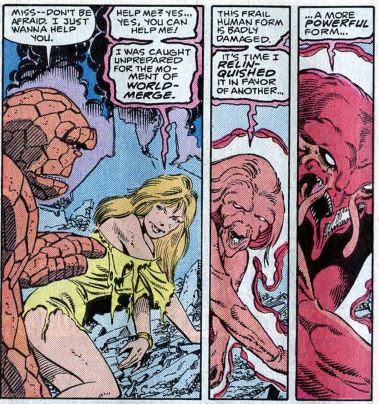 Top half: NYC is wrecked with disaster. Ben tries to help a woman, only for her to transform into a Dire Wraith. Oh, that’s right, this issue is also part of a big company-wide crossover. Over in Rom: Spaceknight, Rom had fought for years to stop the Dire Wraiths’ invasion of Earth. In the historic Rom #65, almost all of the Marvel heroes united to help Rom defeat the Wraiths once and for all. They’re the ones who are trashing New York right now.

Bottom half: Reed also notices Franklin, and realizes that here in Hell, the psychic dampeners keeping Franklin’s mutant powers in check don’t apply. He tells Strange to free Franklin, and Strange does. Just in case this issue wasn’t already dark enough, Mephisto says “Watch, then, as your child is torn to shreds, and does not die!!” Before that can happen, Franklin’s world-ending mutant powers return and he blasts Mephisto with powerful energy.

Top half: The Wraith collapses in front of Ben, and the sky returns to normal. We’re told that Rom and all the rest of the Marvel heroes saved the day out in space, but Ben doesn’t know this. At the Baxter Building, She-Hulk has packed her bags, assuming she’s out of the team. Ben shows up and says she can stay. He might be back on Earth, but he’s not rejoining the Fantastic Four.

Bottom half: Reed, Sue, and Franklin’s souls return to their bodies. Franklin is back normal, the whole thing being like a dream to him. As for the exorcist Elspeth Cromwell, she stays in Hell, awaiting her final judgment. Dr. Strange says he cannot go back to rescue her, for such a thing is outside his province. He then faces Alma Chalmers, the superstitious neighbor who called Cromwell and set all this in motion, telling her to always remember the terrible price paid for her actions.

Unstable molecule: For a guy who always claims not to understand magic in favor or science, Reed is surprisingly down with the backwards logic of Hell, and how everybody’s in their astral forms and not their bodies.

Fade out: Because time works differently in Hell, Sue is being tortured for centuries at the start of this issue. This ordeal doesn’t really come up again, but it’s something to remember when she gets pushed to her limit a few issues from now.

Clobberin’ time: You’ll notice Ben returns to Earth with a small object wrapped in cloth. That’s the severed head of Ultron, the only other survivor of Battleworld. West Coast Avengers #7 would later explain what became of Ultron’s head and how it eventually got a new body.

Flame on: There’s a lot of talk about Johnny having various short-lived flings and “conquests” with women in the past, but is that really the case? He’s had a number of girlfriends, but I don’t believe there have been a lot of one-night stands.

Fantastic fifth wheel: She-Hulk says that being a member of the FF has come to mean something really special to her over the last few months, and she’s bummed about the possibility of leaving.

Four and a half: Here we see a return of Franklin’s world-ending powers that were put to a halt around issue #150. This is not related to the psychic/dream-based powers he’s currently developing as a result of the spider-symbiote’s meddling.

The Alicia problem: This is the first time Lyja the Skrull has met Ben, and she’s defending her love for Johnny. I think we can all agree by now that her love for him is genuine and not part of the plot to infiltrate the FF.

Commercial break: Star Comics! Planet Terry and Wally the Wizard were totally the same kid, right? And since when were Fraggles taller than Ewoks?

Trivia time: Dr. Strange says he and Mephisto have fought many times, but they had only met once before, in Defenders #100.

The Marvel Wiki informs me that Elspeth Cromwell never returned after this, so I guess Mephisto got to keep her soul.

Fantastic or frightful? The two-stories-at-once thing works surprisingly well, as this issue is breathlessly paced, so that both stories get simultaneous cliffhangers right before every turn of the page. But it’s also unbelievably, shockingly dark. And things are just going to get darker.

Next week: Burning down the house.