Re-reading the Fantastic Four comics from the start. Issue #279 finds us during a run of issues in which things get all dark and dreary. It begins with our heroes in a bad place, and everything just gets worse. 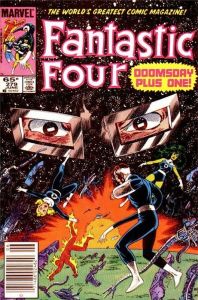 To recap: Dr. Doom is still dead (as far as anyone knows) but his Doombots have secretly been running things in his absence. They hooked up Doom’s ward Kristoff to a machine that gave him Doom’s memories. Kristoff/Doom then successfully launched the entire Baxter Building into space and blew it the heck up. The FF, along with Franklin and Wyatt Wingfoot, appear to be dead. Once Doom’s probe flies away, they come to, with breathable air inside one of Sue’s invisible force fields. Then there’s a lot of business about how to get safety back to Earth. Reed stretches into an aerodynamic shape for Sue’s force field to match. She lets out a little bit of air to propel it toward Earth, and Johnny absorbs the heat built up in re-entry. Reed manages to propel them straight to Latveria, where they land right outside Castle Doom.

Johnny flies off to let out the excess heat he’s built up, and the rest of the team crashes right through the castle. They’re attacked by Doom’s security bots — the purple robots, different from the Doombots. We get several pages of the FF fighting the robots, smashing them up real good. 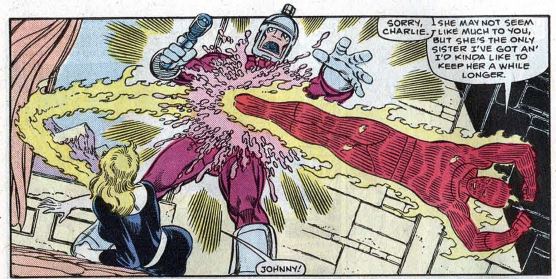 Deeper within the castle, Kristoff refuses to believe the FF are alive, even after the Doombots insist they’re under attack. The Doombots fret over what to do, because they are not programmed to interfere with their master. The FF burst into the room and destroy the Doombots, with Reed deducing that they were the ones behind the attack. She-Hulk rips open Dr. Doom’s armor and is shocked to discover Kristoff, a little kid, inside it. 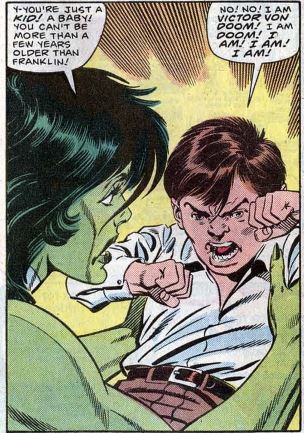 Reed then deduces that Dr. Doom’s memories have been uploaded into Kristoff’s brain as a contingency plan in case of Doom’s death, so he can live on through the kid. Only Kristoff has no idea he’s Kristoff. He keeps insisting he’s the one and only Dr. Doom. Reed starts to say he’ll take Kristoff to his lab, but then it hits him that they’ve just lost their home. All their possessions, all those memories, all gone. He asks, “What more could possibly go wrong?” Oh, Reed, you shouldn’t have said that.

Cut to New York, at a white power rally, where a blond man is inciting a crowd to racial violence. (The “n-word” gets used again.) In private, the man, whose name is Unger, speaks to his master, a person hidden in shadow. Unger transforms from a white man into a black woman, and states his plan to further spread the message of hate, this time at a meeting of the Black Women’s Defense League. Unger says he/she is planting seeds of destruction that will grow, and grow, and grow.

Unstable molecule: Reed’s arm is still in a cast in this issue, seen prominently on the cover, after the fight with Mephisto in the previous arc.

Fade out: Kristoff didn’t take Sue’s force field powers into account due to a flaw in Doom’s programming.

Flame on: We’re told that Johnny can only absorb so much heat before he has to release it. This is in addition to being able to generate flame on his own.

Fantastic fifth wheel: There’s a big deal made of She-Hulk’s gloves getting ripped up. This is because the unstable molecules are not indestructible, but merely adaptable to the FF’s powers.

Four and a half: Franklin seems just fine with being stranded in space, probably because he trusts his folks to save the day. During the fight in Latveria, Wyatt is tasked with protecting Franklin and getting him out of the castle. 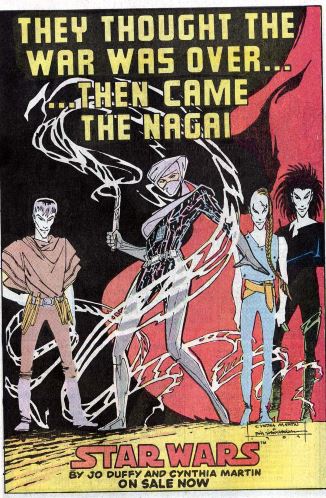 Trivia time: The destruction of the Baxter Building will have a lasting effect for quite some time, and the FF will go through a few alternate headquarters in the years to come. But, just as all dead comic book characters eventually come back to life, so do dead buildings.

The Marvel Wiki informs me that Kristoff’s last name is Vernard.

Fantastic or frightful? The action and fighting are fun, but the one-two punch of the FF losing their home and the racism subplot/cliffhanger make this one a dark, downer of a read — and it’s still a long way from dawn.

Next week: Takin’ it to the streets.