Fantastic Friday: Don’t be a hater

Reading the Fantastic Four comics from the start. As issue #280 begins, our heroes have been brought to their lowest, with their home destroyed and anger running rampant in the streets. What more could go wrong? 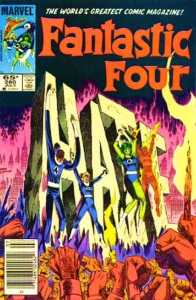 We begin with the FF at the site of the former Baxter Building, recapping to police the events of the previous issue. The child Kristoff, posing as Dr. Doom, launched the building into space and blew it up. Reed says to a storeowner that all the other businesses in the building will compensated for their losses. While Reed explains this, a fight breaks out among police, and they attack She-Hulk and Wyatt Wingfoot, who is also at the scene. She-Hulk starts to fight back, but Reed stops her, saying not to resist arrest, and that he suspects something is going on.

This is only the beginning, as an angry mob surrounds the FF, throwing bricks at them. Sue holds them back with a force field, while Reed says they shouldn’t use their powers against ordinary humans. We then see the shape-changer Unger and his mysterious master, watching this from a distance. After Johnny flies Reed to Avengers Mansion, Unger transforms himself to look just like Reed. (The comic doesn’t tell us this yet, but I’ll spoil it: Unger’s master is Psycho-Man, the FF’s enemy from the Microverse. You can kind of tell, so I don’t know why they’re not just saying it.)

Avengers Mansion is also surrounded by angry protestors. We learn this is where the FF have been staying, and Jarvis the butler produces one of the pamphlets Unger has been passing out around the city, encouraging hatred of all kinds. Reed says he’ll investigate the pamphlet in the lab.

Out in New York, the police van carrying She-Hulk and Wyatt is struck by unseen powerful force, freeing them. She-Hulk suspects it was a bomb, as the streets have gone full-on riot, with looting, fires, and graffiti everywhere. She then gets attacked by a woman wearing a kinky black outfit, complete with a black leather mask covered with metal spikes. The woman introduces herself as Malice, the mistress of hate. 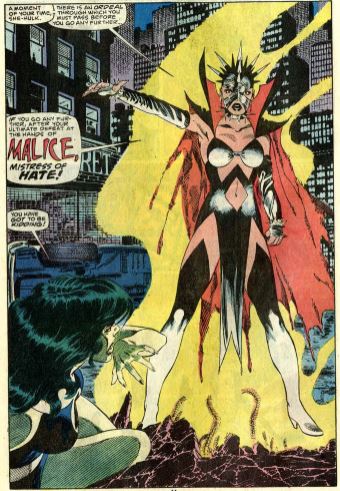 She-Hulk tries to fight Malice, only for Malice to throw her around with some sort of telekinesis. She-Hulk keeps fighting back, only for Malice to cut off her oxygen. Reed appears, only it isn’t Reed but Unger in disguise. Malice thanks him for setting her free and teaching her the ways of hate. Malice then takes off her mask and… she’s really been Sue this whole time!

At the science lab in Avengers Mansion, Reed has deduced that the pamphlet is of alien origin. Franklin appears (he’s staying there, too), having just woken up from a prophetic dream. He’s terrified, because in his dream he saw Sue murder Reed.

Unstable molecule: Reed says that although the other businesses in the Baxter Building don’t have insurance, he’ll have no trouble compensating them for their losses. It’s probably best not to over-think how the economics of Fantastic Four Inc. work.

Fade out: Look closely, and you can see some rubble collected around She-Hulk’s neck when Malice cuts off her oxygen, revealing that it’s Sue using her force fields.

Flame on: Johnny is the comic relief in this issue, making a joke every time he speaks.

Fantastic fifth wheel: If Reed hadn’t stopped She-Hulk, would she have gone ahead and beaten up those cops? I’m thinking she might have.

Four and a half: The same month as this issue, Franklin officially became a member of Power Pack, using his new dream-based powers to help the super-kids fight evil. He got a red costume and the hugely unfortunate code name, Tattletale.

The Alicia problem: Sue turns herself and Alicia, who is of course Lyja the Skrull in disguise, invisible to sneak through the angry mob. Can we extrapolate that Lyja is already good at this sort of thing, being an expert shape-shifter already?

Commercial break: From skinny to terrific: 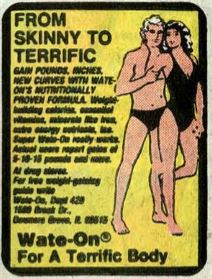 Trivia time: Parts of both this issue and the next cross over with Secret Wars II #2, where we see just how Unger was able to transform Sue into Malice so quickly. He just touched her and mentally transferred all of his own hate into her. That issue also recreates the scene of She-Hulk and Wyatt getting arrested, and Reed studying the pamphlet in the lab.

Fantastic or frightful? All the racism stuff from the last few issues are downplayed in favor of a city in crisis and superhero fightin’ in this one, which is a relief. Still, after so much tragedy heaped on Sue, now we see her turn evil. This arc is where the series is at its darkest. It’s powerful stuff, but it’s up to you decide for yourself how dark is too dark.

Next week: Malice in not-so-wonderland.