Re-reading the Fantastic Four comics from the start. Comics in the mid-to-late ‘80s were often accused of “going dark,” and, yeesh, that’s certainly true for issue #283. 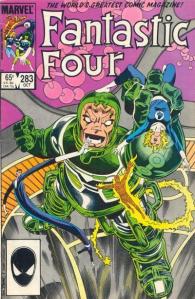 To recap: Psycho-Man recently attacked New York, inciting hate-fueled riots and taking over Sue’s mind, turning her into the villain Malice. Now the FF have traveled to Psycho-Man’s home in the Microverse, with Sue determined to enact vengeance. Also a refresher on Psycho-Man: He’s a microscopic-sized guy inside a human-sized suit of armor (human-sized to us, epically gigantic to him). He has technology that can manipulate people’s emotions — he can make lovers become enemies, turn enemies to friends, etc. Got all that? 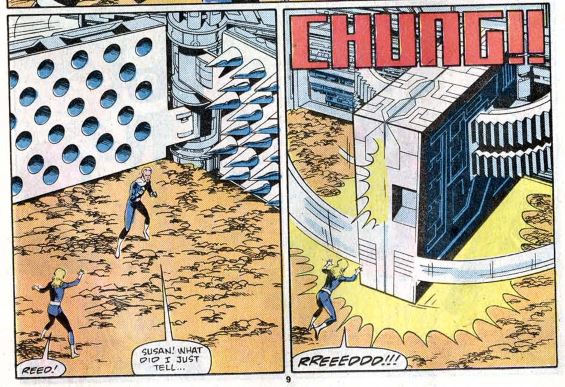 The previous issue ended with everyone’s sizes messed up in the Microverse, so a gigantic Psycho-Man trapped the tiny FF in glass tubes. As this issue begins, it’s as if we’ve skipped a big chunk of the story, with our heroes wandering around outside the Microverse. Only, something is wrong. Reed is older and grey-haired, Johnny is a little kid, and Ben is back in place of She-Hulk, in a half-human, half-Thing form. It gets clearer that something is wrong as we see Johnny, Ben, and Reed die horrifically at the dangers of the Microverse. All alone, Sue breaks down in tears, and then sees the ghosts of her parents, chiding her for being a quitter. Yep, it’s all a dream. Sue wakes up in Psycho-Man’s laboratory, screaming in anguish.

We get a lot of exposition recapping the last few issues, with Psycho-Man boasting to Reed, Sue, and Johnny, still trapped in their glass tubes, about how he has become master of all the Microverse. (Does Baron Karza know about this?) Psycho-Man has been monitoring the FF, so he knows about Sue’s drive for revenge, and he set up a trap for them, making them shrink too much upon entry into the Microverse. This allows him to be a giant compared to them. Although Psycho-Man failed to conquer Earth, he says he will be satisfied instead by breaking Sue’s will, psychologically torturing her by bombarding her mind with doubt and fear. 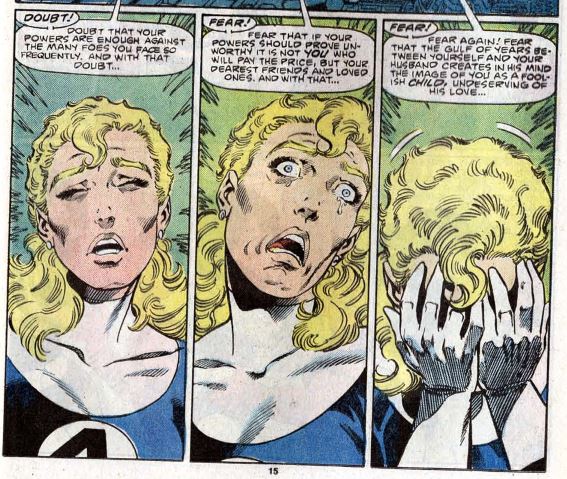 We then check in with She-Hulk, who is locked up in an old-timey dungeon, all made of wood and stone. She says Psycho-Man separated her from her teammates and locked her up down here. She threatens to beat up two guards, who are kinda/sorta dressed like Spanish conquistadors. All they have to do is say “Boo,” and She-Hulk falls to the ground in terror. They explain that Psycho-Man hit her with his fear ray, making her subservient to them. Then they say she will be sent to the Mines of Nuvidia. 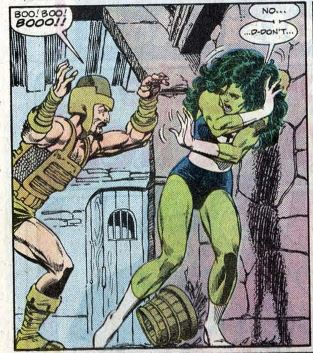 Back in Psycho-Man’s lab, Reed says their powers cannot break through the impenetrable glass material of their cages, but air is able to get in. Reed uses advanced relaxation techniques to lower his stretching powers to minimum molecular cohesion, so his body is almost like a liquid. This allows him to flow out the tube’s tiny air hole.

Reed attacks Psycho-Man, stretching himself around the villain’s neck. Psycho-Man fights back by flipping a switch that causes Sue to experience ultimate agony. Reed tells Sue to fight, and resist it, while he squeezes of Psycho-Man’s armor’s head. He pulls out the real Psycho-Man, who looks just like his armor. Without his tech, Psycho-Man is helpless against the FF.

Then there’s a whole bunch of sci-fi technobabble about how Reed figured out Psycho-Man was lying to them. The gist of it is that the FF did not shrink down too far, but Psycho-Man built an oversized armor and ridiculously huge lab as a “set,” to make them think they’d shrunk down too far. It makes no sense. A still-distraught Sue asks, “Where’s Jennifer?” Then we turn the page to see She-Hulk working in the mines as a slave, hauling huge rocks and being whipped the guards, who tell her, “You work until you die!”

Unstable molecule: Reed turning into an almost-liquid state is neat, never-before-seen use of his powers. The question is, did he already know he could do this, or was this a first-try act of desperation?

Fade out: I believe this issue and the next is Sue at her lowest point, as the misery and anguish just keeps piling on top of her. More on this next week.

Clobberin’ time: No reason is given why Ben is half-human in Sue’s dream. Maybe this is how her subconscious has always seen him?

Flame on: For as dark and intense as this story is, Johnny maintains his sense of humor, playfully calling Reed “fearless leader” at one point.

Commercial break: What could be better? 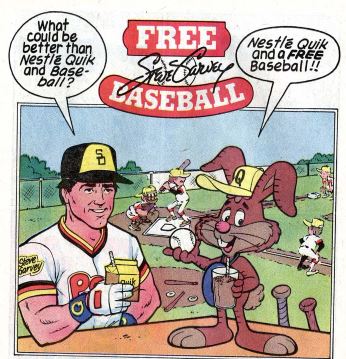 Trivia time: In between his first appearance in Fantastic Four and this story arc, Psycho-Man appeared only one other time, in Micronauts #14-17, which also guest-starred the FF.

Fantastic or frightful? A challenging read, because of how hard and brutal all this is. Sue just keeps getting emotionally tortured, and now She-Hulk does too. It’s always darkest before the dawn, right? Right?!?

Next week: Girl, you’ll be a woman soon.