In Dracula the Series, an old man and three kids are humanity’s first, last, and only defense against the vampire menace. Episode three, “Get a Job,” attempts to explain why the four of them don’t just call the police (or the army, for that matter).

Cemetery plot: Chris gets a job as a bike courier for a local art shop, and is enamored with Julia, his lovely boss. Lucard (a.k.a. Dracula) shows up to purchase a rare painting, and to put the moves on Julia. Uncle Gustav and the kids investigate, discovering that Julia is secretly running an illegal art forgery scheme. They manage to keep Lucard away from Julia long enough for the cops to show and arrest her, thus saving her from Lucard. But there’s a twist: the police chief is also a vampire, and Lucard turns Julia into a vamp after all. 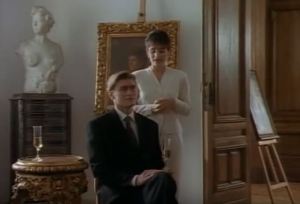 King of the vampires: It’s suggested that Lucard was once friends with Michelangelo (the painter, not the turtle), which means he’s been around since at least the late 15th century.

Blood brothers: The B-plot has younger brother Max trying and failing to convince the local police that Lucard is really a vampire. This includes humorous shtick of him staking out (get it?) Lucard’s day-to-day activities.

Who could say no to that smile?

Stake master: The episode begins with Gustav making the kids read through financial records, hoping they’ll find some way to defeat Lucard through his shady business dealings. (Kinda like how they got Al Capone, I guess.) This is the third episode in a row where Gustav jokes about eating schnitzel, so we can go ahead and call that a running gag.

Slayer’s handbook: Lucard is able to walk around in the sun with no problem. Lucard is unable to be photographed (because cameras use mirrors to capture images, maybe?), so let’s assume he is a reclusive billionaire. He transforms into a large dog to escape Gustav, and crosses seemingly have no effect on him when in dog form. 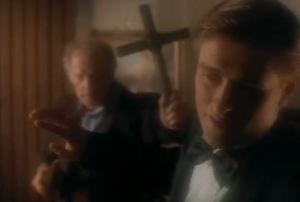 Behind the screams: Chris was played actor-turned-musician Joe Roncetti. Roncetti went on to appear in movies including To Die For, The Virgin Suicides, and Gacy. In the mid-2000s, he retired from acting to pursue music full time. He’s released both solo albums and albums with the band Ash and the Lonely Hearts. His website doesn’t mention Dracula the Series in his bio, sadly. 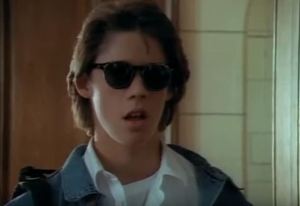 The future’s so bright, I gotta wear shades.

Bite me: This episode is dumb, but fun. This is the “live-action Scooby Doo” stuff that the series is famous for. I especially like how the villain flat-out wins in the end, with the heroes not even knowing he’s won.