Reading the Fantastic Four comics from the start. Now that Johnny and Alicia are married, it’s time to further establish the series’ new status quo. First up is Franklin revealing his new powers to his parents.

We begin with Reed, Sue, and Ben leading an all-out assault on the Mad Thinker’s secret headquarters. This means they did learn he was messing around with other villains during the wedding last week. What’s more, young Franklin is at home, asleep, seeing all this in a dream. The FF team up the local SWAT team to fight their way through the Thinker’s hideout, smashing up all the Thinker’s androids real good. Franklin watches the fight in his astral-projected dream self, staying out of site. But when an android tries to sneak up Reed, Franklin cries “Look out!” Reed wonders if his mind is playing tricks on him.

We see the Mad Thinker coordinating all this from inside his jail cell. The idea here is that he can mentally control his entire network of machines from anywhere, so as long as his body is just sitting there in his cell, there’s nothing the cops can do. We then cut to the Wizard’s hideout (we’re not told where this is, exactly) where the Wizard and one of the Thinker’s androids discuss their next move. The Wizard was watching the battle and saw Franklin’s dream-self there. He wants to use Franklin’s powers to destroy Reed. The Thinker says his grudge is with the FF and not a little kid, and he refuses to have any part of this.

Later, Franklin uses his dream powers to spy on Johnny and Alicia on their honeymoon. (No, he doesn’t spy on that, you perv.) While out hiking, Johnny saves Alicia (who is secretly Lyja the Skrull in disguise) from a rockslide. Franklin wonders why it’s okay for Johnny to use his powers, but for Franklin to keep his a secret. Franklin then pays a visit to Ben, who is considering wearing the mask from his issue #3 costume some more, to hide his face in public. Franklin says people aren’t afraid of Ben’s face, but of his attitude, and the way he keeps fighting with Reed.

In Reed’s lab, Reed hooks Franklin up to a machine. Reed fears the psychic dampers on Franklin’s mutant abilites are breaking down, and this might mean a return of his potential world-ending power we saw back around issue #150 or so. Ben interrupts, saying he won’t let Reed turn Franklin into a monster, like he did with Ben. Ben agrees to take Franklin to the hospital to visit Jarvis the butler, who was injured in Avengers #277. In a NYC taxi cab (with Franklin still in his pajamas, somewhat strangely) Ben and Franklin are knocked out with sleeping gas — it was a trap set by the Wizard.

In the Wizard’s hideout (which I guess is right there in New York), he gives unconscious Franklin some sort of truth serum to determine how Franklin’s powers work, but all Franklin says is “special dreams.” The Wizard knows he’s got a good thing going by also capturing Ben. He uses the brainwashing helmet on Ben, the same helmet he used way back in issue #41. Franklin’s dream self leaves his body and finds its way to Four Freedoms Plaza. Reed is happy to see Franklin, and goes to hug him. When Reed’s hands pass through the kid, the jig is up. Franklin warns Reed and Sue that Ben’s in trouble and leads them to the Wizard’s hideout.

Ben overcomes the brainwashing helmet, explaining it won’t work because he’s a lot meaner and angrier than he used to be. (Is he, really?) Reed and Sue show up, and all three heroes fight the Wizard. Sue knocks him out by cutting off his with a force field around his head. They rescue Franklin and he pleads with them no to hate him because he has powers. Back home, Reed and Sue apologize to Franklin for letting their own fears get in the way of their parenting. They promise not just to accept but to explore Franklin’s powers further, this time as a family. 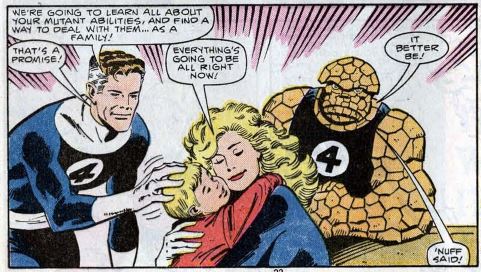 Unstable molecule: Reed thinks he hears his son’s voice, so his response is to hook his son up to machines in his lab? I guess this is his fears getting the better of him.

Fade out: Sue continues to be one of the team’s most powerful members, not only defeating the wizard, but also by taking out several of the androids in the opening fight.

Clobberin’ time: What to make of all this talk about Ben being meaner and nastier than he used to be? Part of it simply because of all the changes the team has gone through (notably Johnny’s wedding) but it’s also foreshadowing yet another big change coming up in a few issues.

Flame on: There’s some forced exposition-speak between Johnny and Alicia/Lyja on their honeymoon. Does he really have to remind her that he’s also known as the Human Torch?

Fantastic fifth wheel: She-Hulk only appears on the left-hand cover corner illustration. It appears that they are slowly (or not-so-slowly) phasing her out of the series.

Four and a half: While Franklin reveals to his parents that he has powers, he doesn’t mention that he’s been out superheroing as a member of Power Pack. In that series, Reed and Sue actually have met the Power family by now, but know them only as Franklin’s friends.

The Alicia problem: Lyja hears a rockslide coming for her and Johnny before he sees it. Does being a shape-shifter make her more in tune to the environment around her, or has she gotten so used to her simulated blindness (she wears special contacts that block her vision) so that her other senses have gotten sharper?

Commercial break: Because girls dig guys who are into model kits: 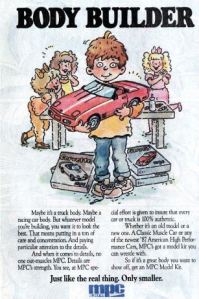 Trivia time: The Mad Thinker’s androids seen fighting the FF in this issue are the same model the FF fought in issues #70-71, that could only be defeated by flinging it into the Negative Zone. (I guess these copies are not as good as the original.) Spider-Man ran into the same model in Amazing Spider-Man #242 and Spider-Man Team-Up #2.

Fantastic or frightful? This issue has the family dynamic that the Fantastic Four is famous for, so that’s good. I also liked the superheroes fighting alongside the cops, something I’m surprised we don’t see more often. The problem is the dreadful artwork, though. It’s doubly upsetting seeing it come from Marvel legends John and Sal Buscema. I promise there’s some interesting stuff coming up in future issues.

Next week: The honeymoon’s over.