Random Warner Bros. – The Lord of the Rings: The Two Towers

Watching all the movies on the Warner Bros. 50-movie box set that I bought for cheap. All three Lord of the Rings movies are on this set, and this week the random number generator landed on The Two Towers. Off to Middle Earth we go! 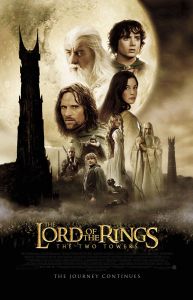 Here’s what happens: In the fantasy world of Middle Earth, hobbits Frodo and Sam must take the all-powerful One Ring deep into enemy territory in hopes of eventually destroying it. They are pursued by the unstable and duplicitous creature Gollum. Elsewhere, their buddies in the fellowship must find some way to drive back the enemy army marching toward at Helm’s Deep. 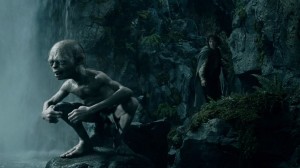 Why it’s famous: This second one in particular? That’d be the character of Gollum, brought to life by combining an actor’s performance with visual effects in a bigger way than had ever been done before.

Get your film degree: For as much as these movies are labeled as special effects bonanzas, it’s impressive how much of it was practical, with real sets and real stuntmen. (A whole bunch of those stuntmen walked away from the Helm’s Deep battle with broken bones, allegedly.) Also, even though Gollum is a CGI monster, his biggest scene is him talking to himself in his madness, accomplished with just the performance and some simple editing. It’s a great example of how effects serve the story, and not the other way around. 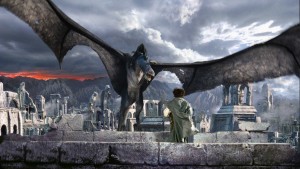 Movie geekishness: Of the three LOTR movies, this is the one that takes the most liberties with the source material. In the finale, Frodo is so overwhelmed with Ring Madness that he almost hands over the ring to the baddies. This is undone at the end of the movie by having him shrug and basically say “I’m better now, thanks.” I’ve always felt this was tonally off, and just an excuse for Frodo to have something to do during the third act. 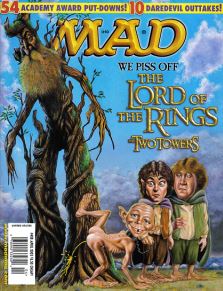 Thoughts upon this viewing: I love the LOTR movies. They’re one-third Tolkien, one-third old-school Hollywood epic, and one-third New Zealand quirkiness. The combo works, and it still holds up.