Reading the Fantastic Four comics from the start. Over the last few issues, the series has been gradually passing the torch (heh) from the original team to a brand new team. In issue #307, we get a look at the new team in action for the first time. 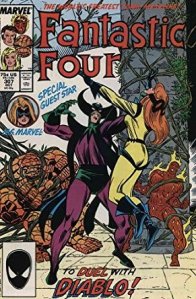 To recap: Reed and Sue are leaving the FF to spend more time with their son. The new team consists of Ben, Johnny, Crystal, and Sharon Ventura a.k.a. the second Ms. Marvel. The issue begins several pages of Reed and Sue saying their official goodbyes, and a lot of little character beats. Crystal says life at Four Freedoms Plaza (which is the team’s new HQ) is just what she and her daughter Luna need after her split with husband Quicksilver. Sharon says she hopes to live up the FF’s legacy, with Reed reminding her that the team began as a bunch of old college friends. Ben reminds himself (and the readers) that he’s the only one who knows the PTSD that Sharon is going through. Finally, Sue and Johnny have a heart-to-heart about how much they’ve grown up since the old days. As Reed is out the door, Ben takes him aside and makes him promise not to butt in when there’s a crisis, and to trust Ben and his new FF. 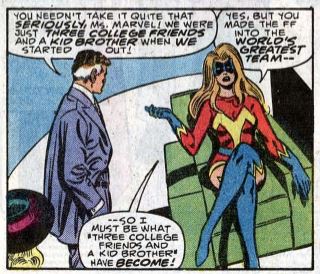 We then cut to a hospital, where Diablo is recovering from his injuries in the fight against the FF last issue. Except, he’s covered with bandages and has both his arms and legs in casts. But, all Sharon did last issue was punch him once. How hard was that punch? He recovers from these injuries quickly thanks to an “elixir of rejuvenation” on his person. There’s a flashback to his origin (he was a ninth century alchemist who discovered an immortality formula) and he escapes from the hospital. 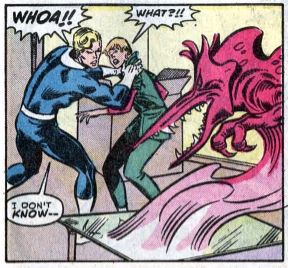 Johnny and Alicia (who is secretly Lyja the Skrull in disguise) are unpacking in their new apartment, when she accidentally breaks a table. Johnny fixes it, only for it to transform into a dragon-like monster (!). Johnny defeats the monster and then looks outside, where ordinary objects are turning into monsters all over New York. 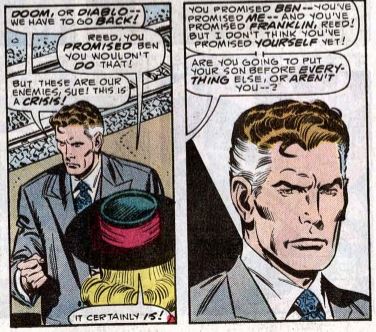 Reed, Sue, and Franklin are at the train station, waiting to leave for their new home in Connecticut, when they hear of the crisis in the city. Reed asks Franklin to use his astral projection powers to look in on the new FF and see what’s happening. He does, secretly following Ben, Johnny, Crystal, and Sharon as they venture deep into Manhattan, where Diablo has constructed an old-timey castle for himself. Reed wants to help them, but Sue stops him. She reminds him of the promise he made to Ben. 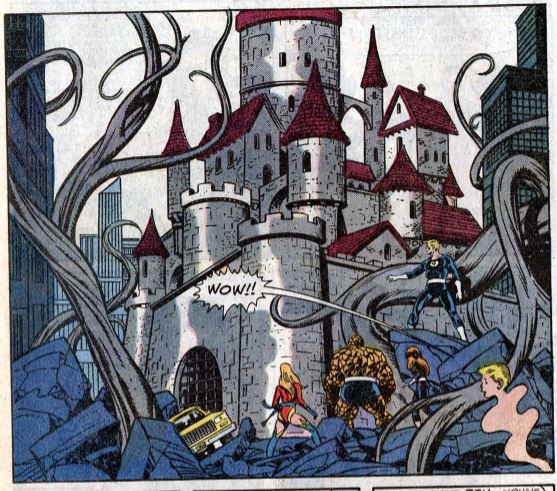 The new FF fights through the castle, battling a bunch of robots and rock monsters Diablo has conjured. Along the way, Ben and Sharon reminisce about their days in the goofy Unlimited Class Wrestling Federation. Crystal watches Johnny’s back, and in doing so, insists that she’s not here to disrupt his marriage with Alicia. They confront Diablo, who uses his potions to summon vines up from the floor to fight them. He then says what might be the greatest line of dialogue in comics history: “They expect me to reach to my cape for another potion, but I’ll use my moustache for strength.” 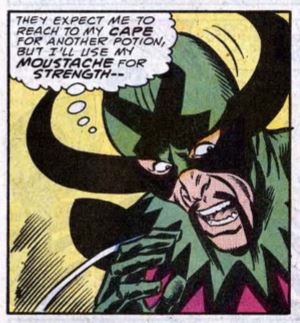 Sharon is the one who figures out what this means, that Diablo’s life-giving elixir wasn’t hidden in his clothes, but on his body. This allows her to subdue him, and the fight is over. Back at HQ, the new team relaxes, having become friends now. Franklin makes another psychic visit to them, and returns to Reed, saying the team saved the day, and everyone looks happy. Knowing that, Reed, Sue, and Franklin walk off to start their new life. (They’ll be back in 20 issues or so.) 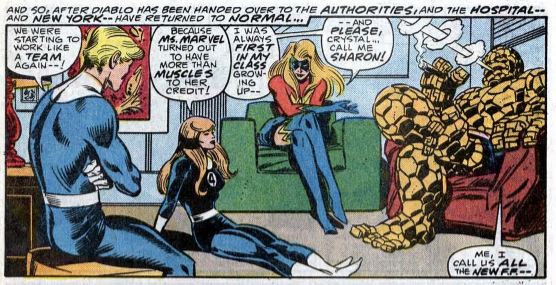 Clobberin’ time: Ben mentions the time he and Sharon wrestled against “The Bulk-Man and Ribbon.” Neither the Marvel wiki nor any of the usual fan sites have entries for these characters, so I think it’s a safe bet this issue is the only mention we’ll ever get of these two.

Flame on: By this point, I’m guessing the Johnny-and-Alicia’s-marriage-will-be-awkward-with-Ben-and-Crystal-around thing is not going to go away anytime soon, as it’s being brought up in every issue. In this one, they make time during the big fight scene to mention it.

Fantastic fifth wheel: Crystal starts wearing the “4” uniform in this issue, but Sharon says she’ll stick with her Ms. Marvel uniform until she feels she’s earned the “4.” (She’ll be getting a new look soon enough. Oh, boy, will she.) She’s also not comfortable with the others calling her Sharon instead of Ms. Marvel, even in the privacy of headquarters.

The Alicia problem: Being blind, “Alicia” is having trouble adjusting to the new apartment, getting to know the size of the space and where everything is. We know that Lyja is really wearing special contacts to simulate blindness, so there’s no reason to think this part is an act. 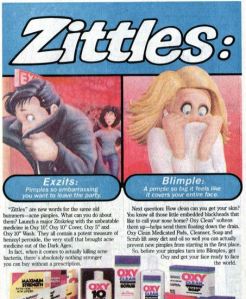 Trivia time: This issue mentions Captain America murdering a man, and how the whole nation is shocked by this. That occurred in Captain America #321, in which Cap had to shoot and kill an Ultimatum henchman in order to save a bunch of hostages. Whether we can call that cold-blooded murder is a debate that goes in the pages of Captain America for a time, and in a roundabout way leads to Steve Rogers retiring and handing the shield and costume to USAgent for a while.

Fantastic or frightful? I really want to like the new FF lineup, but there’s little sense of what chemistry they might have. This issue tries to set up a major crisis for them, but it’s rushed through so quickly that there’s no sense of danger or stakes, just “There’s some monsters, let’s punch them.” And even though the new team is here, the next issue begins an arc in which we mess with the status quo again. This is a strange time to be a Fantastic Four fan.

Next week: Catch the wave. C-c-c-Coke!