Fantastic Friday: I am (not) from beyond

Reading the Fantastic Four comics from the start. In issue #317, the new FF — Ben, Johnny, Crystal, and the Sharon Ventura Ms. Marvel — continue their romp through various forgotten concepts in the Marvel Universe. 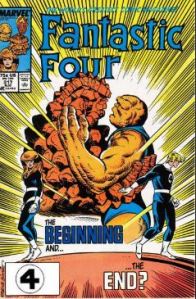 We begin with Johnny kissing Alicia (who is secretly Lyja the Skrull in disguise) before apologizing for having to leave on yet another adventure. Ben gets down to business, asking the A.I.M. scientists from last issue how the name “Beyonder” ended up written in huge letters (in English!) inside an ancient alien device buried under the surface of the Earth since ancient times. Max the alien, who is one half of the duo known as Comet Man, explains that there are other aliens called “Beyonders,” and not just the one we all met in Secret Wars and Secret Wars II. These other Beyonders are creatures hired by the High Evolutionary to move his Counter-Earth into another orbit. It’s pointed out that Ben previously heard about these Beyonders in Marvel Two-in-One #63.

Max teleports the FF and the other Comet Man, Beckley, into space, first to a space station, and then aboard the Comet Man ship. They’re searching for yet another group of aliens called the Nuwali, who apparently built the machine with the Beyonders’ name on it. (I think. Geez, this stuff is confusing.) 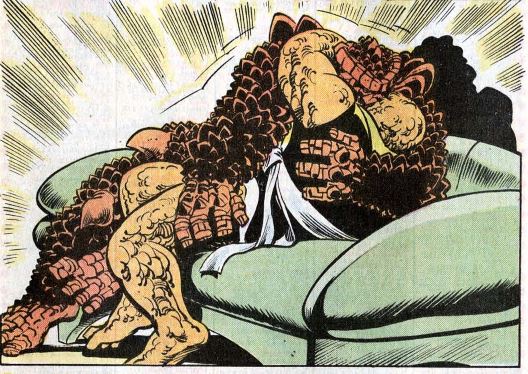 We finally get a breather from all this alien stuff for some character moments. Ben and Sharon have a heart-to-heart, remembering how they close they were getting before Belasco attacked three issues ago. This culminates with Ben and Sharon kissing (and possibly more) on a couch. Then there’s a wordless exchange between Johnny and Crystal, who have been rekindling their attraction throughout this arc. He looks at her, and then flies away. She watches him go with a tear in her eye.

Max and Beckley have a short talk about whether they can trust the new FF, then their ship arrives at the Nuwali planet. The Nuwali, who look like big yellow bugs, say they built the machine in the Savage Land for the Beyonders, but were never paid for their work.  There’s some bit of business about adrenaline being like poison to the Beyonders, and how the Beyonders only communicated with Nuwali through a two-way artefact and never face-to-face. The Nuwali promise to work with the FF.

While Ben inspects the artefact, Johnny and Crystal have a heart-to-heart. He says that although he’s married to Crystal now, Crystal is still his first love. He then says that no matter how he feels about Crystal, he must nonetheless remain faithful to his wife. Crystal says very little during this. It appears that she’s on board with getting back together with Johnny, but it’s ambiguous.

After tinkering with the artefact, Ben deduces that it’s similar to the one from issue #51, a “radical cube” which can open a portal to the Negative Zone. With this mystery solved, the Nuwali break their truce with the heroes and attack. Another A.I.M. scientist shows up out of nowhere and reveals that A.I.M. and the Nuwali have been working together all along, with A.I.M. using the alien tech in their evil plots on Earth.

Fighting! The Nuwali’s weapons are powerful enough to knock out Ben, Sharon and Johnny. Crystal defiantly says she’s willing to give her life to protect theirs. She doesn’t get the chance, because Beckley unleashes the full force of his Comet Man power to defeat the aliens. The A.I.M. guy tries to escape, but Crystal stops him. She says the FF will travel into the Negative Zone to find the Beyonders and put an end to this conflict.

Clobberin’ time: Ben continues to show his smarts as team leader, figuring out what the alien artefact is. But, if he’s as strong as the Hulk now, how do the alien guns knock him out so easily?

Flame on: Johnny turning down Crystal in favor of Alicia is meant to be his ongoing maturity, being a responsible adult by not cheating on his wife.

Fantastic fifth wheel: This issue would have us believe that Ben and Sharon are officially a couple now. Let’s see how long that lasts.

The Alicia problem: It’ll later be established that Lyja studied the Fantastic Four in depth before she started impersonating Alicia, so it’s probable that she knows all about the events of Marvel Two-in-One #63.

Commercial break: Now we know what McCree was doing before he signed up with Overwatch. 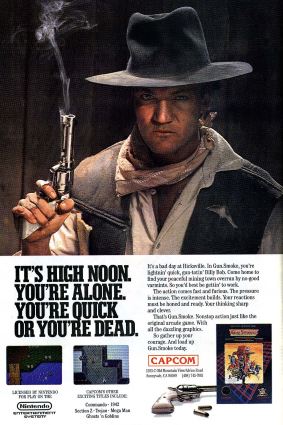 Trivia time: Here’s what happened in Marvel Two-in-One #63. Counter Earth — an artificial Earth created by the High Evolutionary — turned up missing, so Ben, Alicia, and a bunch of Marvel’s space/cosmic heroes went searching for it. An alien named Sphinxor had moved the planet, and had been paid to do so by these mysterious Beyonders. Just like FF #317, the Beyonders are talked about but never shown. Further, Sphinxor describes them as the most powerful creatures in the universe, greater than Galactus, Thanos, and the Watcher combined. And this was written years before Secret Wars!

Fantastic or frightful? This issue has more character work and more action than the last few, but this entire arc continues to be unfocused and unwieldy. There’s yet another big shake-up coming soon down the line, so we’ll see.

Next week: Talking ‘bout my e-e-e-evolution.