Reading the Fantastic Four comics from the start. In issue #324, the Fantastic Three — Ben, Johnny, and the Sharon Ventura Ms. Marvel — are in the middle of the Inferno crossover, while also dealing with all the cosmic continuity dealing former Avenger Mantis. I’m sure this won’t be confusing at all. 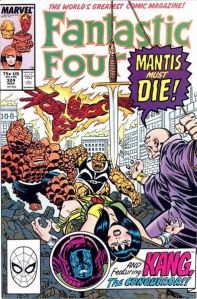 To recap: Mantis (different from the one in Guardians of the Galaxy vol. 2) sought the FF’s help to go to space and get back her abducted child. She was then kidnapped by time-travelling villain Kang. Also, demons are attacking NYC. We begin outside the city, where Johnny survived a crash at the Mountain of the Dreaming Celestial (which is where?) and he can’t turn off his flame. Instead, he’s out of control, burning hotter and hotter. Mantis escapes from Kang, and he can’t determine where she’s gone, so he time-travels to find out, leaving behind a bomb for the FF. Johnny throws the bomb into space, remarking that he’s burning so hot that not even the vacuum of space can put out his fire.

Kang finds the future in flux, thanks to the Inferno event, so he returns to New York, finding the whole city emerged in a fiery hellscape. The FF pursue, with Johnny’s fire continuing to blaze out of control. Both heroes and villain are drawn to the same spot, where they come across this odd scene: 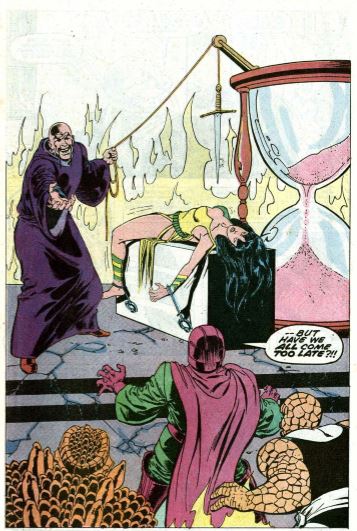 That’s Necrodamus, an old Defenders villain. He’s a magic user in search of eternal youth, who in this issue has added world domination to his list of wants. The Inferno event is making magic powerful all over the world, so he’s going to sacrifice Mantis to the all demons for godlike power or some such. In addition to Inferno, there’s also a rare planetary alignment about to happen (because of course there is). Necrodamus surrounds himself with an impenetrable shield, which attacks with a familiar sound effect:

Sharon says she has a plan to defeat Necrodamus, whispering it to Kang. Kang promises to subdue Johnny’s flame, and teleports himself and Johnny away. The demon N’Astirh, one of Inferno’s main villains, appears before Necrodamus. Necrodamus pledges his loyalty to N’Astirh. Kang teleports Johnny to the planet Mercury, giving Johnny a high-tech device with instructions to bury it deep within the planet’s surface. Johnny is able to do this with his flame burning so hot. The device puts the planet outside of temporal alignment, so the planetary line-up doesn’t happen. This causes Necrodamus to fade away into nothingness. 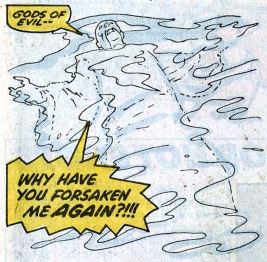 Mantis is free, and once again asks that the FF help her rescue her child. In space, Kang betrays Johnny, leaving him all alone in orbit around Mercury. Even with his newly-increased powers, Johnny is certain he can’t make the 120 million mile flight back to Earth. Unbeknownst to him, help is already on the way. The Silver Surfer is in space nearby. He can sense that something’s happened to Mercury, so he’s off to investigate. 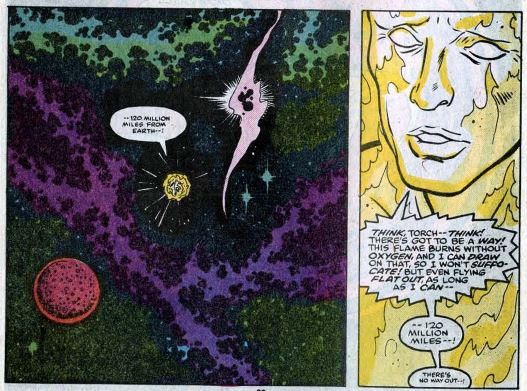 Clobberin’ time: Ben promises he’ll do whatever it takes to get Johnny back to normal. Johnny points out that’s what Reed always used to say to Ben.

Flame on: Johnny says melting his way through solid rock, which he does on Mercury, gives him a splitting headache. I don’t know if this was always the case, or a side effect of his new powers.

Fantastic fifth wheel: I’m at a loss as to how taking the planet Mercury out of space and time was Sharon’s idea. It’s good that they’re giving her more to do than just swing punches, but this is a stretch.

Trivia time: Writer Steve Englehart is credited in this issue as “S.F.X. Englehart.” The story goes that he asked for the name change because, allegedly, he says Marvel editorial changed so much of his script that the sound effects are all that’s left of what he wrote.

This being the Marvel Universe, I was surprised to see them visit the planet Mercury and find no aliens living there. I looked it up, and yes, there are Mercurians in the MU. Nikki of the original Guardians of the Galaxy is from Mercury.

Fantastic or frightful? Here’s yet another issue that wants to be cosmic grandeur but ends up a whole lot of nothing. I’ve gone from looking forward to these posts every week to dreading them.