Fantastic Friday: And I’m hoping that they’ll ratify me

Reading the Fantastic Four comics from the start. Our heroes continue to battle politicians and wacky villains as the Acts of Vengeance crossover comes to an end in issue #336. 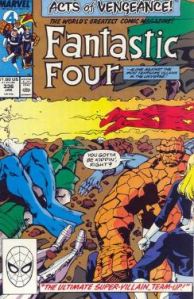 Our heroes are in Washington D.C., where Reed is testifying against the government’s proposed superhuman registration. (This group is “the committee” and several characters are identified as “congressmen” but that’s as specific as it gets.) The meeting keeps getting interrupted by bumbling C-list villains who are attacking the FF as part of the Acts of Vengeance event, in which all the villains are working together to fight heroes they don’t normally fight. As this issue begins, a Representative Pertierra accuses the FF of secretly orchestrating the villain attacks just to make their point. Reed dismisses this argument, saying that if were to send supervillains to attack Washington, it’d be “a better class of villain,” which is a rare glimpse into Reed’s dark side. 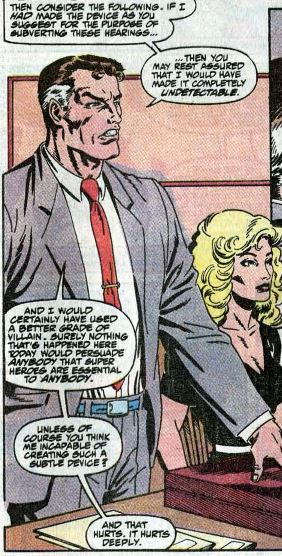 There’s also some talk about the mysterious electronic device, planted in the room by a shadowy stranger who’s been following the FF this whole time. The committee believes that the machine is what drew the villains to this location. Reed speculates that perhaps the device is also somehow influencing the minds of the committee. Someone announces that more supervillains are gathering outside. Ben, Johnny, and Sharon head outside to fight them. This leads to a funny bit where Sue tries to give a speech with the sounds of a superhero battle coming from outside. 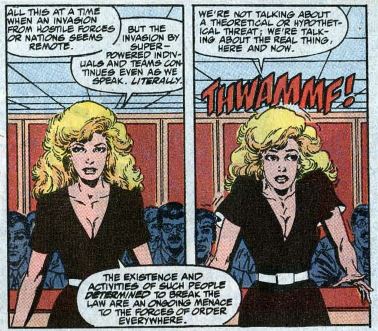 The electric device goes off again, mind-controlling all the members of the committee, who try to kill Reed and Sue. They’re no match for Reed and Sue’s powers, of course. Reed and Sue hold them back while Reed finally disables the device. Outside, we see that Ben, Johnny, and Sharon have successfully defeated a whole gang of lesser-known bad guys — Whirlwind, The Owl, Orca, Man-Ape, Armadillo, Baron Brimstone, and Stilt-Man. 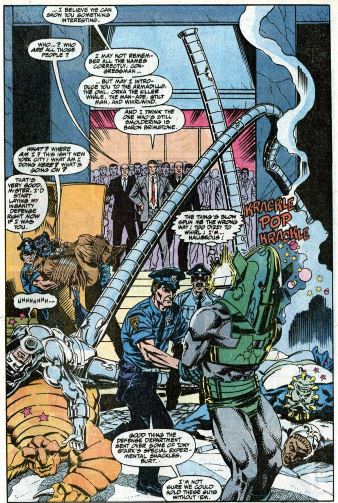 Reed then produces a device of his own, which scans the genotypes of everyone in the room, to show whether someone is a mutant, or at least has the potential for superhuman abilities. Two members of the committee (we’re not told which two) have more-than-human genotypes. Reed not-so-subtly threatens to release this information to the public, and then the committee votes to indefinitely table the superhero registration bill. (This is blackmail, right? Reed just went and blackmailed the government?)

The FF leave Sharon behind to track the electric device back to its source, which takes them to an industrial park in Albany. They kick down a door and find Dr. Doom waiting for them. Doom explains what Acts of Vengeance is all about, and that’s he’s no longer working with the rest of the AoV villains (they split up in Avengers #311). Johnny attacks, only to discover that this is yet another Doombot.

This defeat causes yet another villain to emerge, the Super-Adaptoid, who has “adapted” the FF so that he now has all their powers combined. Note that this is not one of Mad Thinker’s power-adapting androids that the FF have fought in the past, but a similar one who has been an Avengers villain since the early days of Captain America. 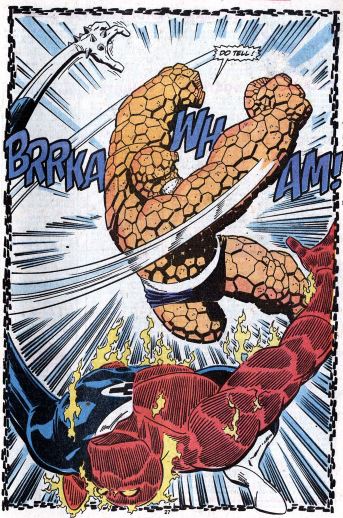 The fight is over pretty quick. Ben is able to knock out the Super Adaptoid with one punch. The explanation for this is because Ben is human now, he has no super powers for the Adaptoid to adapt. He is wearing his Thing-shaped exoskeleton at the time, but the comic pretty much says that doesn’t count. (It’s okay. I can’t figure out the logic of any of this either.) The issue ends with one last “bumbling villain” joke in which Hydro-Man and Water Wizard show up to fight the FF, only to crash into each other and create a big splash.

Unstable molecule: Reed is anti-registration in this story, but he’ll later be pro-registration in Civil War. Many have called this poor continuity, but because this blog series is a re-read and not a first time read, I’m going to be looking out for what will happen between now and then that gets Reed to change his mind.

Fade out: Sue is the first to suspect that the device is affecting the politicians, calling one of them “weak of mind” only to then show that man thinking, “Cheese dip?” This has got to be a reference to Groo the Wanderer, right?

Clobberin’ time: It’s not mentioned in this issue, but Ben did fight the Super Adaptoid once before, in the incredibly awesome Marvel Two-In-One #75.

Flame on: Upon discovering that this Dr. Doom was another Doombot in disguise, Johnny says he wonders if Doom was ever a real person at all. This is something to keep in mind as we continue on into Walt Simonson’s take on these characters.

Fantastic fifth wheel: Reed says he didn’t bother trying to stop Flying Tiger last issue, because he trusted that Sharon would save them all. He added that she did it “elegantly.”

Four and a half: Franklin appears in only one panel, paying off the running gag of him wanting to see dinosaurs at a museum with him and Sharon off to finally see those danged dinosaurs. (Franklin has been to the Snark homeworld. Aren’t the Snarks more or less dinosaurs?) 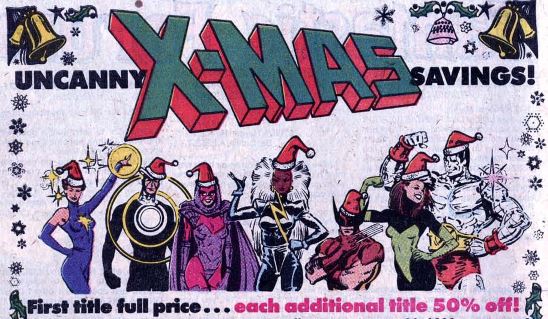 Trivia time: That’s a wrap on Acts of Vengeance. A few interesting things happened during the crossover, most notably Spider-Man temporarily gaining the cosmic powers of Captain Universe, and the bizarre Daredevil versus Ultron fight which was psychedelic and dreamlike. Acts of Vengeance came to end in West Coast Avengers #55, in which Loki was revealed to be behind the whole thing, only for Thor to bury him deep beneath the Earth.

Fantastic or frightful? This issue cuts down on the political discourse and brings back more action and humor, which is welcome. Artist Ron Lim continues to be an unsung hero of Fantastic Four, giving all the characters a lot of personality through his great facial expressions.

Next issue: It’s about time.