Seems like every ‘80s genre show eventually did a Chinatown episode, and episode sixteen, “Tattoo,” if F13’s turn. 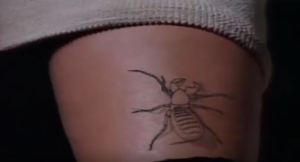 The villain this week is Chen, an obsessive gambler with a box of cursed tattoo needles. He gives his victims a tattoo that comes to life and kills them, an in exchange he wins big at gambling. He says he’s doing all this to help his sister and his grandfather, but his grandfather doesn’t approve.

Micki, Ryan and Jack investigate, running afoul of both Chen and some local gangster suspicious of Chen’s winning ways. The gangsters rope Chen into a game of Russian roulette, so, in desperation, he tattoos a snake onto his sister. Jack saves the sister, and Chen loses it all (as in, his life.)

When the show is smart: Upon this rewatch, I found myself invested in the grandfather/grandson old-world-versus-new-world conflict. Misguided Chen thinks he’s doing the right thing, and grandfather is frustrated when Chen won’t listen to reason.

When the show is cheesy: It’s Chinatown, so of course there are Chinese trappings all around, but one scene with fireworks going off to stop our heroes is really, really pushing it.

Devilish dialogue: Grandfather: “I don’t want money that shames me. I want a grandson I can be proud of.” Chen: “This is America. Everybody wants money. People here don’t ask you where you got your money from. They just want to know that you’ve got it.”

– The grandfather is played by the great Keye Luke, who brought out the best in any line of dialogue he was ever given. 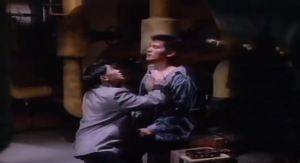 Back in the vault: Not the show at its best, but still an interesting one with some really good scenes.

Next: Where’s Horace Pinker when we need him?