Fantastic Friday: Days of future when?

The FF are returning home from a picnic (!) to find that their new headquarters, Four Freedoms Plaza, has disappeared and is replaced by a recreation of the original Baxter Building. The FF fight their way through the building’s old-school security devices, marveling at how it’s a perfect recreation of how it looked when they started their superhero careers. They then confront another Fantastic Four, perfect replicas of the team from their early issues.

The classic FF defeats the new FF (or perhaps the new FF lets themselves be defeated) and the two Reeds try to sort out what’s happened, theorizing either time travel or an alternate dimension. Classic Sue mentions her son Franklin, and out walks a fully-grown adult Franklin. Adult franklin freaks out when he sees the new FF, and he flies off, using destructive new superpowers we’ve never seen before. The FF find themselves back in Four Freedoms Plaza as if nothing had ever happened, except the building is now surrounded by a force field, preventing them from leaving.

We cut to a lighthouse in coastal England, home of the X-Men spinoff team Excalibur. There, mutants Rachel Summers and Meggan are relaxing in the sun, wearing what appear to be togas. Rachel talks about her hazy memories of the post-apocalypse future she came here from. Rachel feels a jolt of energy, saying she’s being called somewhere.

In New York, X-Men Banshee and Forge are out for a stroll, when the adult Franklin appears before them. Franklin freaks out again, thinking the two are dead. He flies off again. In a place located “between here and now,” a mysterious figure is notified of a “code red time emergency.” The mystery man tells his computer to launch a Sentinel attack.

Banshee and Forge show up at FF headquarters, just as the sentinels attack the FF. These sentinels are all in the form of miniature spaceships — look closely and you can see one is a tiny Enterprise from Star Trek. Sue traps the Sentinels in a force field, and they self-destruct rather than be taken apart for information. This also destroys the barrier around the building. 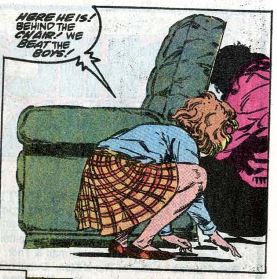 The FF and the two X-Men track down adult Franklin at the Power family’s apartment, where he and the Power Pack kids are innocently playing hide and seek. The kids assume that the adult Franklin is a dream projection of young Franklin’s dream powers. As the FF prepare to take adult Franklin back to headquarters, adult Franklin vanishes. We then see that there’s a new building in the place of Four Freedoms Plaza, with a huge letter X on the side.

That’s the “to be continued” for this story, which crosses over into New Mutants annual #6, X-Factor annual #5, and Uncanny X-Men annual #14. It’s revealed that the adult Franklin is a dream-projection, sent back in time by the real adult Franklin just before he died in Rachel’s post-apocalyptic future. He’s traveled from the future in hopes of fixing everything that’s gone wrong in his timeline. The mystery man is Ahab, who was Rachel’s master when she was a brainwashed mutant-hunting “hound” in the future. The FF and a whole bunch of mutants fight and defeat Ahab. It ends when adult Franklin’s dream-self dissipates, his powers transferred into his younger self.

Back to annual #23, it also has two backup stories. The first is a Volcana solo story, where she learns she a small amount of the Molecule Man’s powers, which he gave her before he took off with the Beyonder. The second backup shows what happened after Molecule Man and the Beyonder merged to form a new cosmic cube. The cube transforms into a female cosmic being named Kosmos. (So… does this mean she’s their daughter?)  She meets up with fellow cosmic being Kubik. He teaches her all about the other Marvel cosmic beings, such as the Watchers, the Celestials, and Eternity. Kosmos is then left to explore, and find her own place in the universe.

Unstable molecule: Reed and Forge use Forge’s able-to-build-anything powers to soup up the Fantasticar, so now it has highly advanced scanning gear.

Fade out: Sue still has her elevator signal device in her belt from the original Baxter Building, even though the building was destroyed some time ago. She says she’s hung onto it for sentimental reasons. It does conveniently help them get into the building.

Flame on: In the FF vs. FF fight, the two Human Torches are somehow able to hurt each other with just their fire powers. I guess this is because one of them is a dream construct.

Fantastic Fifth Wheel: In a later part of the crossover, Sharon meets everyone from X-Factor for the first time, except that they already met, back in the Fall of the Mutants crossover. It’s almost as if these X-Men crossovers are hard to keep track of.

Four and a half: Again, during this time it’s hard to pin down just what Franklin’s power are or how powerful he is. Adult Franklin can create living creatures from his dreams, which can apparently think and live independently from him, which is scary. Franklin being able to rewrite reality like this will come again later. On a more amusing note, young Franklin is seen holding a stuffed tiger that’s a dead ringer for Hobbes from Calvin and Hobbes. 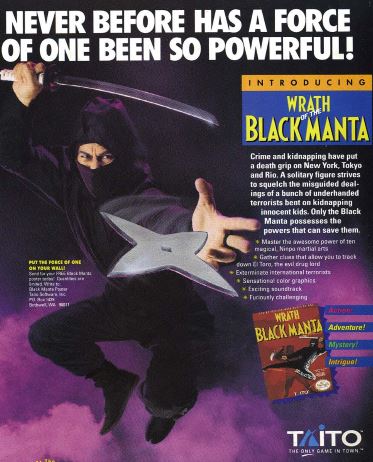 Fantastic or Frightful? Days of Future Present is an intriguing story, full of time travel and far-out dream worlds, but the artwork is a disaster. Allegedly, the assigned artists couldn’t meet deadline, so they were replaced with others to get pages drawn as hurriedly as possible. It shows, and the wholly ugly artwork makes the whole crossover unreadable.

Next: Out with the old, in with the new.