Reading the Fantastic Four comics from the start. We met them in the last issue, now in issue #348 we see them in action. Spider-Man, Wolverine, Hulk, and Ghost Rider — the New Fantastic Four! 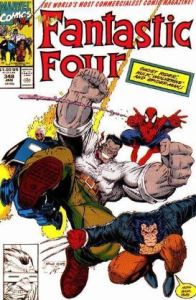 To recap: De’Lila is a Skrull fugitive who has succeeded in incapacitating the Fantastic Four. A battleship full of Skrulls is on Earth to pursue her. They have taken over the minds of all the monsters on Monster Island to help them catch her. Posing as Sue, De’Lila has tricked Spider-Man, Wolverine, the Hulk, and Ghost Rider into thinking that the rest of the FF are dead. The four newcomers are now the New Fantastic Four (with a capital N) and are off to fight the Skrulls.

The New FF take off in a Fantasticar with the Hulk piloting (is the grey Hulk a pilot?) while Spider-Man has a scanner tracking the source of the monster invasion. Wolverine says they’ll trust the rest of the world’s armies and superheroes to deal with the monsters themselves. On Monster Island, the Mole Man shows while investigating what happened to his monsters. He finds the Skrull ship parked there. 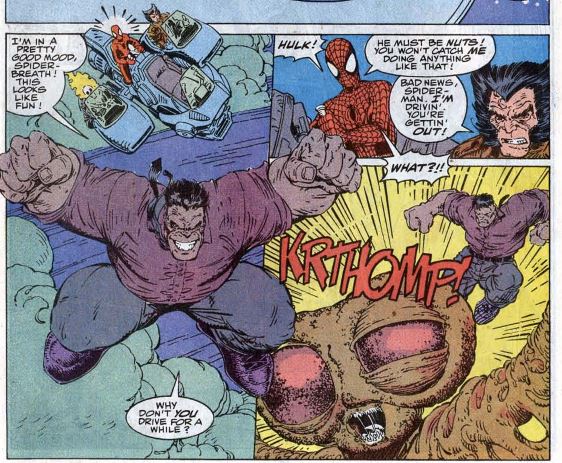 De’Lila wakes Reed, and it’s revealed that she’s not just a Skrull, but a telepathic Skrull. She uses mind control on Reed, saying she needs his help to find an egg. Inside this egg is an “Inorganic Techno-Troid,” or ITT for short. The ITT is so well-hidden, only Reed’s science genius can find it. 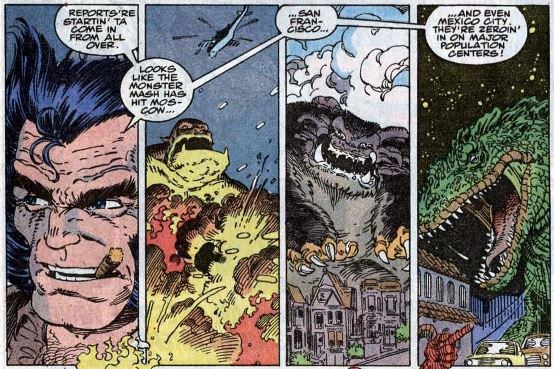 Stories come in about the monsters attacking all the world’s major cities. In Washington DC, the New FF fight a big insect-like beast as it attacks an airplane. Hulk and Ghost Rider do all the punching while Spidey saves everyone on the plane. Once the fight is done, the New FF continues following the energy source, into the Bermuda Triangle. On Monster Island, the Mole Man creates a sinkhole to suck the Skrull ship underground. 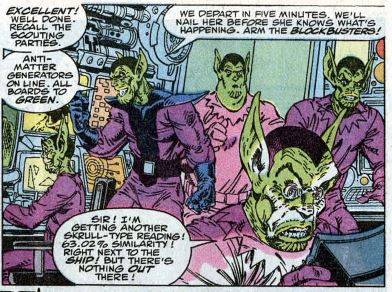 De’Lila and a still mind-controlled Reed track the ITT to a location in the Catskill mountains. They find a hidden tunnel in one of the mountains. On Monster Island, the New FF have also found a hidden tunnel, leading to the underground chamber where the Mole Man, one of his giant monsters, and an army of Moloids are confronting the Skrulls. There’s a bit of comedy as the monster steps on the Hulk’s foot (!) causing the Hulk and Wolverine to fight it. 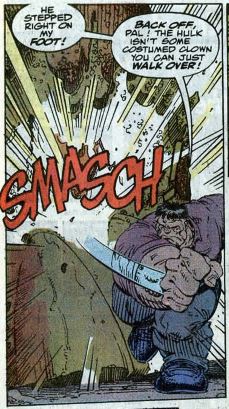 The Skrull captain tries to escape by shape-changing into the form of a rock, until the Hulk and Wolverine threaten to destroy all the rocks. Ghost Rider uses his penance stare (sweet!) on the captain, who reveals his crew is in search of some Skrull rebels who intend to assassinate the Skrull emperor. 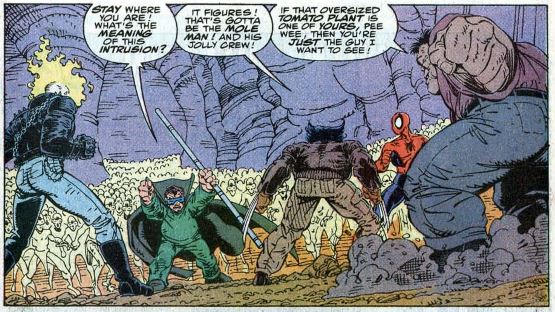 One of the Skrulls then notices Spider-Man’s scanner — the one De’Lila gave him — recognizing it as Skrull tech. Spidey and Skrull realize that Sue is really De’Lila in disguise. That’s when De’Lila and Reed show up. (Does this mean the cave in the Catskills leads directly to an island in the Bermuda Triangle? The comic doesn’t say.) Reed, still being mind-controlled, says the only way the New FF will get Sue is through his dead body. The Hulk, believing Reed is also a Skrull in disguise, answers, “It looks like you’re going to get your wish.”

Unstable molecule: Reed still has some thoughts to himself as he’s being mind-controlled. He thinks De’Lila is “exciting” (!) and he tells Roberta the robot secretary (remember her?) to “tell it to the marines” as he leaves. This is foreshadowing for the next issue.

Flame on: While he’s unconscious, Johnny is shown with a large grey hood covering his head. I guess we’re meant to think this prevents him from using his powers.

Fantastic fifth wheel: There are two schools of thought on the New Fantastic Four. One is that they’re a blatant cash grab. The other is that they’re a parody of a blatant cash grab. (This issue’s cover boasts “The world’s most commercialest comic magazine,” suggesting that Marvel is in on the joke.) The big question for this blog is whether the New FF means these four can now be considered alternate members of the Fantastic Four. It’s always been my opinion that the New FF is its own team, separate from the regular FF. Ben would agree, it seems, because in the Thing series from 2006, Spider-Man mentions the New FF, and Ben says, “You think that counts?”

Commercial break: This never worked, did it? 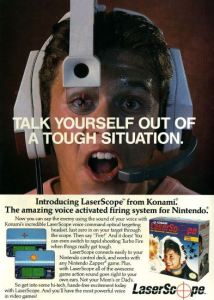 Trivia time: The New FF would later re-team to fight the Sinister Six in Amazing Spider-Man, with Sleepwalker taking Ghost Rider’s place. The New FF also appeared in Secret Defenders and Fear Itself. In the video game Marvel Ultimate Alliance 2, it’s possible to play as the New Fantastic Four, with the game’s narrator announcing them as such.

Fantastic or frightful? This is such a fast-paced issue with so much going on that there’s little sense of how this new team works as a team. It’s a bad issue for Wolverine fans, as Wolvie keeps getting sidelined in favor of the other three. On the plus side, the issue is packed with a lot of humor and action — and who doesn’t love giant monsters?

Next: Battle “four” all.