Watching all the movies on the Warner Bros. 50-movie box set that I bought for cheap. This week the random number generator can’t shut its eyes as it watches A Clockwork Orange. (Fun with math: This is the first and only time during this blog series that the random number generator chose two movies in the correct chronological order, with this one following last week’s Dirty Harry.)

Here’s what happens: In the future (I think?), young Alex leads a gang of “droods,” committing unthinkable acts of violence and assault every night, solely for their own amusement. When Alex is finally arrested, the government gives him a procedure meant to turn him into a perfectly non-violent citizen. But who is really controlling who?

Get your film degree: How much of the movie is science fiction and how much is pure metaphor? I cannot say. You could argue that it’s too convenient how the second half of the movie has Alex reuniting with everyone he encountered in the first half. If the movie is a metaphor, about a totalitarian state forcibly re-wiring its citizens and potentially robbing them of free will, then we need Alex to reencounter his old life to show how he has (or hasn’t?) changed.

Movie geekishness: We all know how Kubrick likes to use classical music in place of typical film scores, but Beethoven (a.k.a. “Ludwig Van”) is practically a character in A Clockwork Orange. Alex’s love of Beethoven is a nice character detail, so that he comes off more like a real person, despite the violence he commits and the overall strangeness of the movie. 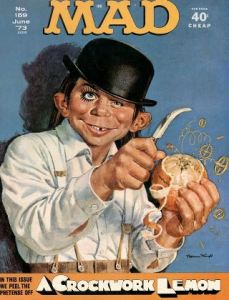 Thoughts upon this viewing: This is a hard one to watch, but that’s by design. The intent is to provoke audiences, and leave them rattled by the time it’s over. In that sense, the movie succeeds.

Next: All about the Benjamin.