Watching all the movies on the Warner Bros. 50-movie box set that I bought for cheap. This week the random number feels bad for all those horses as it chooses Ben-Hur. This is the biggie, the movie prominently featured on the box artwork and the only one to get a second disc.

Here’s what happens: Judah Ben-Hur is a wealthy Jew living with his family in Jerusalem. When a Roman leader a former friend of Judah’s sentences Judah to lifelong imprisonment and slavery over a minor crime, Judah begins a long quest to take revenge and find his long-lost mother and sister. Also, there’s Jesus.

Why it’s famous: An old-school Hollywood epic, with huge sets and vistas peopled with hundreds of extras. It culminates with a chariot race that is oft-parodied but never equaled.

Get your film degree: It’s often been said that epic films should have simple plots and easily-explained motivations as a balance to the massive production value. That’s the case with Ben-Hur, as the movie never loses sight of Judah’s desire to reunite with his family, despite everything we’re seeing on screen. 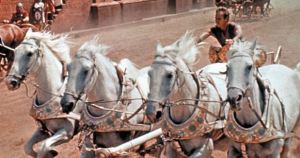 Movie geekishness: That chariot race, though. Despite all the times it’s been spoofed and/or ripped off, it’s still genuinely thrilling. 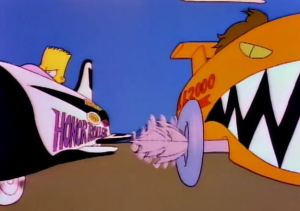 Thoughts upon this viewing: Really enjoyed this one. The sense of big spectacle really works, with Charlton Heston’s big acting fitting right in. Even the religious stuff works, as it respects the importance of the Jesus story without cramming it down audience’s throats. It’s a big, hearty meal of a movie.

Next: You’re the wizard now, dog!