Reading the Fantastic Four comics from the start. It’s writer-artist Walt Simonson’s last issue on the series. His run on the comic is defined by time travel stories, and his finale in issue #354 is no different.

The FF have been arrested by the otherworldly bureaucrats of the Time Variance Authority, who intend to place our heroes on trial for authorized time travel. The FF isn’t having it, attempting an escape. The TVA agents offer Ben a deal — to rewrite history so the Fantastic Four never existed, allowing Ben to re-live his life an ordinary human. Ben considers the offer for a second, but then remembers that the FF stopped Galactus from devouring the entire universe in issue #341. He says that without the FF, there’s no one to stop Galactus, and he calls out the TVA officials, saying they knew Ben’s universe would be destroyed if he took the deal.

The TVA sends their Minutemen cyborgs after Johnny and Ben, for several pages of fighting. Meanwhile, Justice Peace, the TVA’s top enforcer, searches for Reed and Sue, who are hiding behind an “invisibility sphere” created by Sue. Reed says he’s reverse engineered the TVA’s tech to create a computer virus to attack them. Justice Peace spots them and uses a high-speed gun that can break through Sue’s force field faster than she can regenerate it. Then the virus starts working, splitting the TVA’s timeline into multiple parallel timelines. (This is depicted in the art by having the other timelines “splitting off” in smaller panels to the left and right of each regular-sized panel.) 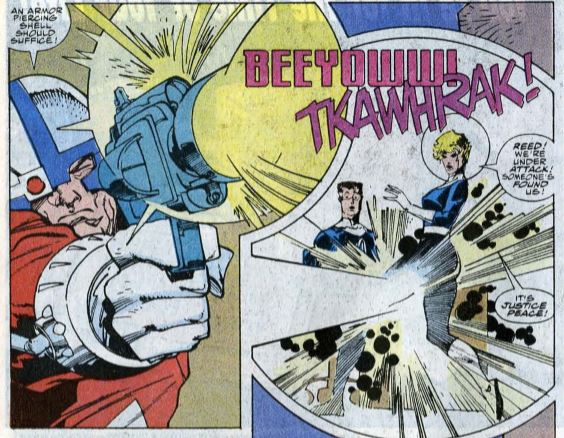 We catch up with Sharon, who reveals that she let herself be taken captive by the TVA. She uses a wrestling move to get away from her captor. She reunites with Ben and Johnny who then reunite with Reed and Sue. Then, in this crazy story, things take an even crazier turn. Our heroes end up in a railroad yard, full of old-timey trains. Reed identifies this as the Cross-Time Central Railroad. It’s run by an alien named Casey, who explains he is enamored with antique Earth trains.

Casey offers the FF a ride in exchange for “certain goods.” The train flies off into space, with Justice Peace and the Minutemen in pursuit. There’s another big fight, and Justice Peace manages to hold his own against the FF. The train is then pursued by a “reality wave,” depicted as a large white surface covered with cracks. Reed says this is another part of his virus, which is erasing all references to the FF’s universe from the TVA’s database, so the TVA will never again bother Earth. With the rules of reality being rewritten, Justice Peace says the FF have no longer broken any laws. He leaps into the wave and vanishes.

The train then reenters the FF’s universe. Casey reveals that the “goods” to pay for the trip are the FF’s uniforms, which he intends to turn into railroad worker uniforms. So the FF strip down to their undies and return to Four Freedoms Plaza. We see that Ben has mutated from his spikey form back to his classic rocky form. As he and Johnny banter, Reed comments that everything’s back to normal.

Unstable molecule: Maybe it’s too much of a stretch (heh) for Reed to create a computer virus that can alter reality, but he’s doing this with the TVA’s own tech, so I guess that explains it.

Fade out: The comic would have us believe that Sue and Reed cannot be seen inside her “sphere of invisibility,” even though that’s not how her powers work. A few pages later, Justice Peace is able to spot them, revealing that they’re not invisible after all.

Clobberin’ time: Absolutely no reason is given as to why Ben reverts from his spikey form to his more-familiar rocky form, except to say, “somebody up there just likes me better like this.” This is a not-so-subtle jab at Marvel editorial’s efforts to undo all the big changes of the last hundred issues or more and get back to Silver Age Fantastic Four.

Flame on: Johnny doesn’t like Ben calling him “Flame Brain.” Ben apologizes, saying it’s getting harder and harder to come up with good insults.

Fantastic fifth wheel: Sharon uses wrestling moves to escape a guard, remembering that she got her start in the goofy Unlimited Class Wrestling Federation.

Commercial break: This is three years after the movie came out.

Trivia time: The rumors state that Walt Simonson’s wife, writer Louise Simonson, had one too many feuds with Marvel editorial over her work on X-Factor, so she was leaving Marvel, and Walt left with her. He returned a few years later to work on Iron Man 2020 and Heroes Reborn: Avengers. Mostly, though, he became a DC Comics mainstay, working on Orion, Hawkgirl, Batman: The Judas Coin, and Michael Moorcock’s Elric, among many others.

Fantastic or frightful? What started as a Douglas Adams-style romp ends with a lot of running around, and a wacky cartoon space train. Fortunately, Simonson’s artwork is so good, it carries the lack of a real plot. It would have been nice to have Simonson on the series for more, but this is as good a sendoff as any.

Next: Out with the new, in with the old.