Reading the Fantastic Four comics from the start. It feels like everything’s been building to issue #358. This was a triple-sized (!) issue intended to celebrate the FF’s 30th anniversary. But… this is also the story that presses the reset button, sweeping the last hundred or so issues of continuity off the table. 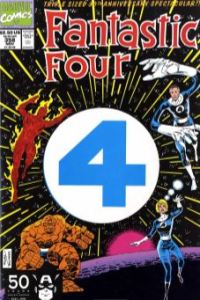 Gimmie a gimmick: Before we get to the comic itself, we must first note that this is our first gimmick cover! The front and back are two layers of hardstock paper. The front cover has a circular cutout with a number four on it. Open the cover, and the inside covers depict the FF and other Marvel heroes in battle with a bunch of FF villains. Happily, the same drawing is repeated on the back covers, so that you can enjoy the art without the cutout.

Now the actual comic. In the previous issue, the Puppet Master and the Thing attacked FF headquarters, all to reveal that Alicia is really… a Skrull! This issue begins with Johnny furious with anger, demanding to know what happened to Alicia. He’s so enraged that Sue has to trap him inside a force field and cut off his oxygen to settle him down. Reed demands answers, and the Skrull reveals that her real name is Lyja.

Lyja spills her backstory. Years earlier, the Skrull High Command decided to infiltrate the Fantastic Four, because they can’t properly invade the Earth until the FF are taken out first. Because the FF have devised ways to detect Skrulls, the High Command decided that a single Skrull must be bionically engineered for a special purpose, which is how they made the original Super-Skrull. After gathering the Skrull empire’s finest warriors, Lyja was chosen for the mission. She was to come to Earth and take Alicia’s place.

Lyja studied every aspect of Alicia’s life, notably her romance with Ben, which was meant to be Lyja’s “in” to the FF. She was also surgically fitted with contact lenses rendering her blind when in a human state, to better pull off the ruse. When most of the big-name heroes mysteriously disappeared from Earth during the first Secret War, the Skrulls saw this as their opportunity. They abducted Alicia (from her home, I’m assuming) with the line “Take her to Paibok.” Distracted by the Secret War crisis, Sue and Franklin never noticed the switch.

Lyja further explains that when Ben stayed behind on Battleworld after the Secret War, she had to change her tactics, pursuing Johnny instead of Ben. Then the unthinkable happened. Lyja truly fell in love with him. She decided to reject her Skrull mission and live full-time as Alicia so she could be with Johnny. From that point, FF history plays out like we already know, with Ben coming back from Battleworld, to the Johnny/Alicia wedding, to the present. Then Lyja drops one final shocker — she’s pregnant with Johnny’s baby!!!

Reed prepared the team’s rocket for a spaceflight, to rescue Alicia from the Skrulls. Because this is an anniversary issue, we’re treated to a two-page retelling of the team’s origin. Johnny has a heart-to-heart with Ben. He says all he can think about were all the good, happy times he spent with Alicia, now knowing it was Lyja all along. Ben then meets with Puppet Master, who apparently ran off after the fight last issue. Ben tells Puppet Master everything, and they appear to part on good terms. Back home, though, Puppet Master blames the FF for Alicia’s abduction. Remembering that revealing the truth about Alicia was part of a plan by the Mad Thinker, the Puppet Master makes a puppet of the Cobra, who is locked up in the Vault super-prison alongside the Mad Thinker. It doesn’t work, as the Mas Thinker isn’t fooled by the Cobra. The Mad Thinker reveals to us, the readers, though, that sending the FF to space was his plan, and that he’s been secretly tweaking the radiation shielding on the FF’s spaceship.

Back at HQ, the FF are preparing to leave, when Lyja joins them, wearing an FF uniform. Johnny freaks out again, but Reed says they need her to take them to Alicia, and the uniform will help distinguish her from other Skrulls. Lyja offers to help the team in exchange for her freedom. Johnny responds with “I don’t know you… I never did!”

The team flies straight to the Andromeda Galaxy, to what appears to be a lifeless asteroid but is secretly a covert Skrull space station. The FF try sneaking onto the base, but they’re quickly spotted, leading to several pages of fighting Skrulls. Lyja picks up a laser gun and helps the FF in the fight. Johnny sees this, but still frets about not being able to trust her. 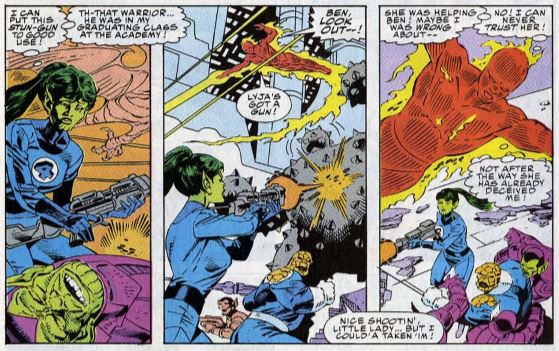 The Skrulls retreat to make way for their leader Paibok the Power-Skrull. Paibok explains that he’s gone through a similar bionic process as the Super-Skrull. Just like the Super-Skrull has the combined FF’s powers, Paibok has the combined powers of some of (or all?) of the X-Men. They fight for a while, with Paibok using Iceman’s ice powers, the metal strength of Colossus, and Storm’s lightning bolts.

Lyja reveals that Paibok was once her commanding officer, but the Fantastic Four have become her family. She thinks, “I am a Skrull in body… and human in soul!” Paibok injures Johnny and is about to fire a lethal lightning bolt. Lyja jumps between them, taking the blast and sacrificing herself to save Johnny. Ben brings an entire wall down onto Paibok, defeating him.

Johnny recovers, and cradles Lyja in his arms. She says she’s not really pregnant, and just said that in the hopes he would stay with her. She asks for his forgiveness for all the deception. She says, “I only wanted you to love me,” and then she dies in his arms. Johnny says he always loved her, and he always will.

All the Skrulls start freaking out because the fight damaged the station’s nuclear core, and the place is about to explode. Reed finds Alicia (the real Alicia) who has been in suspended animation since her abduction. He frees her from the Skrulls’ cryogenics machine. While she is still unconscious, he and the FF race back to their ship. They escape the station, just as it explodes Death Star-style.

Aboard the FF’s ship, Alicia awakens, and immediately embraces Ben, saying “Everything will work out… as long as the two of are together!” Before anyone can deal with that drama, the ship shields fail, caused by the Mad Thinker’s sabotage. This damages the ship’s hyper drive. Without it, it will take a millennia for the FF to reach home. They are (get ready for it) lost in space. To be continued.

And there we have it. In one issue, the characters’ histories are completely rewritten. On the other hand, if Lyja must die, she is given a noble, heroic death. Not to mention a big space battle and a fun villain in Paibok. So this issue is not the disaster everyone says it is, despite everything it represents.

I’ve spent all week researching writer-editor Tom DeFalco, in an attempt to better understand where he was coming from. DeFalco’s fingerprints are all over some of the biggest shakeups in Marvel history. He co-wrote Amazing Spider-Man #252, the first appearance of Spidey’s black costume. He later was credited with coming up the concept of the Clone Saga, which revealed that Spider-Man was a clone of the real Spidey, after the two had switched places decades earlier. Lest you think DeFalco is merely some agent of chaos, he also created and wrote Spider-Girl, which still maintains a passionate cult following.

In interviews, DeFalco often speaks of wanting to throw curveballs at the readers, always surprising them and catching them on edge. Therefore, you could argue that his goal was not to take the comic back to the ‘60s, but merely to establish a clean slate for new stories. It’s true that he disliked the Johnny/Alicia marriage, but there’s some question as to exactly whose idea it was for the whole Skrull thing — DeFalco or Marvel editors Mark Gruenwald or Ralph Macchio (not the Karate Kid, a different guy). As we’ll move forward, we’ll look for more of DeFalco’s attempts to shake things up. It’s also worth noting that there was a method to his madness. While sales on Fantastic Four dropped during Steve Englehart’s run, they slowly but steadily climbed after DeFalco took over.

Back to issue #358, then. This being an anniversary issue, it also has a bunch of pin-ups by various artists, two articles looking back at FF history, and a weird backup story where a character called “the Editor” erases part of Dr. Doom’s history. (Going meta, are we?)

Unstable molecule: Reed says he’s made sure to put extra radiation shielding on the FF’s ship, to protect the team from the cosmic rays that initially gave them their powers. These are the same shields the Mad Thinker sabotages.

Fade out: Paibok is able to fire his lightning right through Sue’s force field, as if  it isn’t even there. Sue’s force fields have protected her from lightning/electricity in the past, so I don’t know what’s so special about Paibok’s lightning.

Clobberin’ time: Ben makes a lot of hokey jokes in this issue, but he gets serious in his talk with Johnny, promising that whatever Johnny’s going through, he doesn’t have to face it alone.

Flame on: During the battle, Johnny conjures a flame whip, which he uses to whip-crack the Skrulls. Physics aside, I don’t recall seeing him use this ability before.

Fantastic fifth wheel: She-Hulk appears on the cover as one of the Marvel heroes fighting alongside the FF.

Four and a half: Sue says Franklin is staying at Avengers Mansion while the FF are in space. I guess the Power family no longer have babysitting duties now that their series is cancelled.

The Alicia problem: And so Lyja is dead. Except that this is a comic book, so of course she’s not really dead. What’s surprising is how soon she’ll be back — just a few issues from now.

Commercial break: The idea behind this ad is give trading cards to trick-or-treaters instead of candy on Halloween. Might as well put a sign on your yard that says “Egg this house.”

Trivia time: One of the backup articles looks at Stan Lee’s original pitch for Fantastic Four. It’s mostly the same as what we got in issue #1. It really plays up a love triangle between Reed, Sue and Ben that we never quite got. It also says Johnny could originally only use his fire powers for five minutes before they burned out, a detail they wisely did away with.

Fantastic or frightful? This issue has a reputation as the worst thing imaginable, but upon re-reading it, it really isn’t so bad. What’s more, after going through a bunch of Tom DeFalco articles and interviews this week, I’m don’t believe he’s the bad guy here, and I’m actually excited to see where he’s going to take the series.