Rewatching the 1988 movie Willow scene-by-scene. Why? Because it’s freaking Willow! Here’s the movie’s first action scene, albeit a brief one, 13:46-16:12 on the Blu-ray. 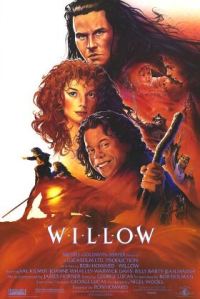 We’re still at the Nelwyn festival, where the peppy music starts playing, everyone is again doing that dance holding up green leafy branches. The sound of a wild animal is heard in the distance and everyone starts to panic. It almost sound like two animals, with a growl and howl overlaid on each other. One of the death dogs comes running right through the center of the festival.

We saw death dogs briefly in the opening scenes, but this is their starring moment. In the Willow tie-in books, they get an origin story. They were created from dark sorcery by the Veil Folk, magical fairy-like beings who live hidden away in the deep woods. Because the Veil Folk cannot touch steel without being harmed, they created the death dogs to protect them from sword-wielding Daikini (humans). Many years later, the death dogs were corrupted by Bavmorda and her people, who used them as hunters. The tie-in books state that dogs’ mouths are acidic, and cause lethal injections into anyone they bite.

The dog’s presence in the festival causes a lot of commotion, with everyone running around like crazy. Burglekutt and the High Adlwin both get reaction shots. Willow asks Meegosh where little Mims ran off to, and Meegosh says he doesn’t know. Ranon takes the other kid, Ranon, away for protection while Willow looks for Mims. The dog continues to run through the festival, and there’s a great Evil Dead-style shot of the dog’s POV, chasing everyone at high speed. Then there’s a shot of Mims, standing on a wooden platform of some sort, crying.

The dog stops by one of the small structures, which I guess is somebody’s house, again calling into question exactly where this festival is taking place. There aren’t enough buildings around for this to a proper  village center, yet there are still some buildings. The dog makes an impressive 90-degree turn and enters the building. As it does, we can see it has long rat-like tail.

Willow continues to search for Mims, some more people run around, and what appears to be a second dog runs past. Willow finds Mims, takes her hand, and leads her to safety. There are more shots of the dog running around, editing against a Nelwyn woman carrying a baby, foreshadowingly. A dog does a super-cool leap over a fence and starts tearing apart an empty wooden baby carriage on the other side. Willow and Mims are close enough to this so that they see it happen through openings in the wooden fence between them.

The when the character we’ll soon come to know as Vohnkar leads the village guard into action. These guys are great, with their matching leather armor, spears, and dive-headfirst-into-battle attitude. Vohnkar and the others climb over the fence, and it’s a spears vs. dog battle. It appears a few farmers have joined the guards, dressed in regular clothes and carrying pitchforks instead of spears. The dog snaps at the guards, and one of them stabs it.

The dog’s stab wound is a yellowy mustard color, further establishing these as otherworldly monsters. The dog rears up and, with a spear still stuck in its back, knocks Vohnkar onto his feet. Vonkhar isn’t down for long, though. Another Nelwyn tosses him a spear just as the dog attacks. The dog leaps right onto the spear as Vohnkar holds it up to defend himself. The rest of the guards leap in, brutally stabbing the dog to make sure it’s dead.

The danger seemingly passed, the Nelwyn gather around, and Willow is reunited with Ranon. Vohnkar holds up the destroyed carriage and says, “It was after somebody’s baby.” Cut to a woman with a baby, but not the one we saw seconds earlier, reacting with shock. Willow and his kids also react with horror, all remembering the mysterious baby that washed up on their land. There’s an overhead of shot of Willow running through the festival to get back home, nearly running right over a lit fire pit.

The next shot is Willow bursting through the front door of his house, suggesting that his land isn’t that far from the festival’s location. He calls for Kaiya, and for a few seconds there is no answer, suggesting the death dogs got her. But then she walks into frame holding the baby. Willow embraces his wife and tells her they can’t keep the baby, and must take her to the village council. Kaiya responds with a nod, understanding that this is important, and they embrace again.

Several questions are unanswered during these scene. First, is it just one dog that attacks the festival, or multiple dogs? The tie-in books always describe the dogs running in packs, and the quick editing makes it look like there’s more than one. But once Vohnkar and his crew kill just one, the danger is over. Also, where are the dogs’ keeper, to whom they must report? Perhaps this unseen threat, more than the dog itself, is what prompts Willow into action. Finally, we’ll see later in the movie that Bavmorda wants the baby alive to perform a ritual, but in this scene the dog clearly is out to kill the baby, the way it tears up the carriage. Was this dog (or dogs) separated from the rest of the pack and gone wild on its own, finding the right scent by accident?

On the plus side, all this animal carnage provides some character development for Willow. Even though he’s not the one doing the actual fighting, this scene establishes him as the hero, as he protects his kids, and then decides to take the baby the village council, even at risk of harming his status in the community.

Next: No bones about it.