Reading the Fantastic Four comics from the start. Like any good ’90s comic, issue #377 features multiple plotlines happening at once with tons of guest stars. 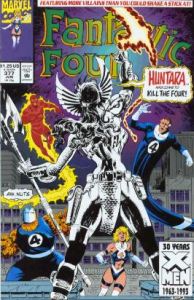 To recap, Johnny is in jail after accidentally burning down part of Empire State University. Franklin was taken into the future by his time-traveling grandfather and came back at least ten years older. Lyja and Sharon Ventura are still hanging around. The issue begins with a flashback (flashforward?) showing Franklin and Nathaniel Richards in as renegades in a dystopian future, where Franklin’s fought giant robots with a psionic sword and a plasma rifle. Sue still refuses to believe he’s the real Franklin and attacks him. Reed stops the fight, more worried about Sue’s furious anger than about Franklin. Sue and Franklin wander off to different parts of the building to calm down. Sharon and Lyja want to interfere, but Ben stops them, saying this is a family matter, and that there’s nothing they can do.

Cut to the streets of New York, where supervillain Klaw is roaming the streets in a Raphael-style hat and coat disguise. He’s just learning that Johnny is jail awaiting trial. A portal opens near him, and out leaps Huntara, a barbarian swordswoman. She says she is seeking “the four who must be destroyed.” Some trigger-happy cops open fire on her. Klaw helps her out by scaring the cops away. He promises to lead her to “the four.” 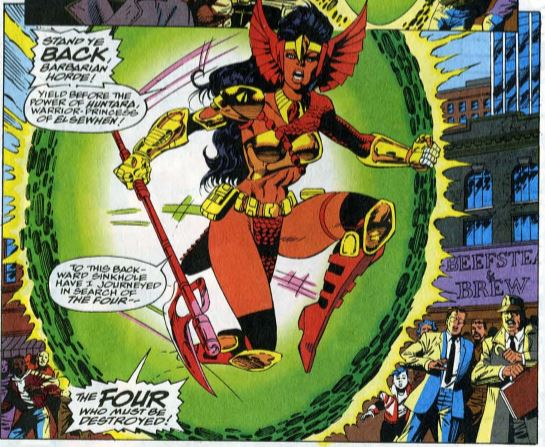 Back at HQ, Sue takes her anger out on supernatural nanny Agatha Harkness, blaming her for letting Nathaniel take Franklin away. Agatha says it had to be done because Franklin’s powers would have gotten too far out of control otherwise. Agatha adds that she’s seen the Malice persona as part of Sue’s mind.

In space, we catch up with villains Paibok the Power-Skrull and Devos the Devastator, not giving up on taking revenge against the FF despite their recent defeat. There are then several pages devoted to telling us Devos’ origin story. He was a child when an army of raiders destroyed his planet. The raiders abducted him, taught him to fight, and a scientist named Symka turned him into the killing machine he is now. Through all this, he developed his philosophy of creating peace by destroying any species capable of war. That includes Paibok, whom Devos is eyeing closely.

Back to HQ, where Lyja is suffering intense pain. She insists that it’s only stress, but Franklin can sense there’s more going on. Sue, meanwhile, calms down and admits to Reed that she’s been acting “like a total witch.” (Her words, not mine.) She says the world around them changed and grown darker, and she admits she’s struggling to keep up.

Reed, Sue, Ben, and Lyja head to the trial, with Sharon staying behind to keep an eye on Franklin. They’re being watched by agents of Dr. Doom, who we learn is sending out a probe in search another cosmic being whose powers he can steal. Outside the trial, we see photographer Peter Parker is there, alongside his boss J. Jonah Jameson. Silver Sable and the Wildpack are there as well, with the Sandman now among their membership.

Inside the courthouse, the FF meet with Johnny and attorney Matt Murdock, who says that because the university agreed to settle, the trial is a mere formality. Also there in this private meeting is Bridget O’Neil, the feisty co-ed whose live Johnny saved during the fight that destroyed the school. Lyja appears jealous seeing Johnny and Bridget get a little flirtatious.

The trial begins, with Murdock’s opening statement emphasizing that the fire at ESU was an accident. He is interrupted when Paibok and Devos come crashing through a wall, with Paibok boasting that he’s going to destroy the FF with the whole world watching. Then a wall on the other side of the comes crashing down thanks to Klaw and Huntara. Paibok can tell these two have similar goals, so the villains immediately team up, surrounding the FF.

Unstable molecule: Despite Reed’s insistence that his tests prove that this Franklin is the real Franklin, there’s one panel where he thinks to himself, “Who is this teenager who claims to be Franklin?”

Fade out: Sue’s speech about how the world has gotten darker is a curious meta moment, addressing (or not?) the sweeping changes in the comics industry in the early ‘90s.

Clobberin’ time: There’s a humorous bit where the FF need a cab to go to the courthouse Ben stops one by standing in front of it and then lifting it over his head. Why they’re not taking the Fantasticar I’ll never know.

Flame on: While in jail, a thug tries to pick a fight with Johnny and he uses his powers to scare the guy off. A guard chews Johnny out, saying that he’s not in one of the “special cells” because Murdock promised that Johnny wouldn’t use his powers while locked up.

Fantastic fifth wheel: Sharon still wants to reconcile with Ben, but he doesn’t trust her because she recently worked with Dr. Doom. When she stays behind with Franklin, whom he also doesn’t trust, that just makes things worse.

Four and a half: Again, there’s only a partial explanation as to where Franklin went during his time traveling. Aside from a fleeting mention of his “responsibility” that brought him back to the present, it’s still a mystery.

The Alicia problem: This issue seems to forget that Lyja is here to kill Johnny. Instead, she’s experiencing mysterious pains she wants to keep secret from everyone, and she feels jealousy when seeing Johnny interact with Bridget O’Neil. Bafflingly, one panel describes Lyja’s emotions as “hot and pungent.”

Klaw had a lot of appearances prior to this, but almost always whenever a big group of villains gather for whatever reason. It’s like he’s just wandering around the Marvel universe looking for a group to join, and that makes sense how he partners with Huntara so quickly.

Fantastic or frightful? This is an in-between issue, catching up on ongoing storylines, while moving the pieces in place to set up the next issue. You could argue it’s a few storylines too many, but that’s really all there is to this one.