This scene is merely a short travel montage, establishing that the characters are moving higher and higher into the snowy mountains. First there is a shot of all NockMaar and our heroes moving upward on a snowy path, followed by a shot of a tent town set up on a hilltop. The wiki doesn’t give a name to this location, referring to it only as “General Kael’s camp.”

Then we see Willow struggling to keep up with the cart he’s chained to, and he falls. Madmartigan immediately rushes over, picks up Willow, and carries Willow on his shoulders, further establishing that they’re becoming friends. Then we cut back to the tent town, where General Kael rides into view, wearing his skull mask, with two soldiers riding alongside him. Then back to the soldiers approaching. Sorsha gives a “Ha!” spurring her horse to pick up speed and ride ahead of the rest.

There’s a closeup on Kael’s skull face as Sorsha rides up to him. Sorsha says, “I found it, Kael.” There’s a closeup of the crying baby, so we know the baby is the “it” in this case. Sorsha adds, “That should make my mother happy.” Willow and Madmartican are apparently close enough to see this exchange, as Willow asks, “What are they going to do to her?” Madmartigan doesn’t answer, but merely looks straight ahead, angrily.

This is a short scene, so let’s talk filming locations! All these snowy scenes, and the upcoming battle in the Tir Asleen Castle were all filmed at the Snowdonia National park in North Wales. The exterior of NockMaar castle was filmed in nearby Llanberis, North Wales. The waterfall where the blackroot scene was filmed is Powerscourt Waterfall in Ireland.

The cart chase was mostly filmed in Black Park Iver Heath in Buckinghamshire, England, with the Nelwyn Village exteriors shot in areas around Hertfordshire, England. The interiors were all filmed in England’s legendary Elstree studios.

From there, most of the rest of the exterior filming took place in New Zealand, in and around Glenorchy, just outside of Queenstown, most notably the lake around Fin Raziel’s island. Other scenes were filmed in New Zealand’s Tongariro National Park, the same spot where the Mount Doom exteriors were shot for Lord of the Rings. 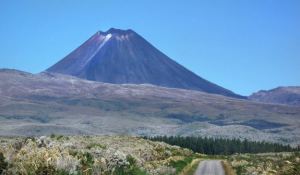 Finally, IMDb insists that Arthur-Burney Falls Memorial State Park in California was also a Willow filming location, but it doesn’t say what was filmed there.

Next: The smell of magic.