Reading the Fantastic Four comics from the start. Issue #389 continues a bunch of ongoing subplots, with a surprise revelation or two. 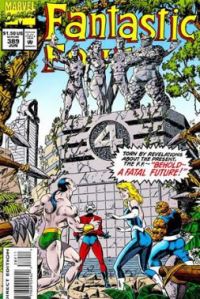 As with the last few issues, this one begins with the Watcher breaking the fourth wall and speaking to the reader. He shows us an ominous spaceship heading for Earth, and then shows a scene from a hospital in New York, where an electrical engineer named Suarez finds the alien implant removed from Lyja during the super-gross birth scene back in issue #386.

Cut to Four Freedoms Plaza, where the FF and special guest star Namor are meeting with a globe-trotting archeologist, Professor Robeson, who has found an ancient sculpture in the jungles of Brazil that looks just like Ben. Rather than mount an expedition right away, Sue is reluctant to investigate, admitting to Robeson that Reed is missing and presumed dead. Then there’s a lot team bickering, where Ben doesn’t like Namor hanging around putting the moves on Sue, while Johnny frets over his and Lyja’s egg (that’s right, Lyja freakin’ laid an egg in issue #286), and new team member Ant-Man has had no luck finding where or when now-teenage Franklin went after stealing the FF’s time sled. Got all that? 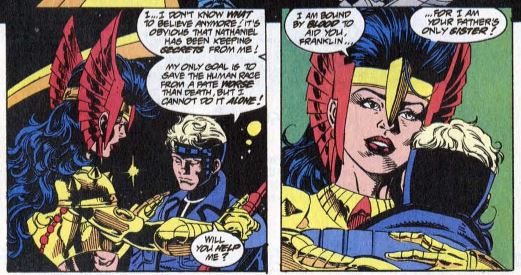 We then catch up with Franklin, who appears to be somewhere (somewhen?) in space with the stolen time sled. He meets up with barbarian swordswoman Huntara, and the two catch up, revealing that they have quite the shared history. She chides him for working alongside his time-traveling grandfather, whom Huntara refers to as “Nathaniel the Mad.” Franklin says there’s an even bigger concern than Nathaniel, and that is the Dark Raider. Franklin says the Dark Raider has been traveling throughout various alternate timelines, killing each universe’s version of Reed Richards. Huntara promises to help Franklin, saying she is bound to blood to aid him, and “I am your father’s only sister!”

We cut from that surprise revelation to FF HQ, where Ant-Man says his chronometer has a lock on Franklin’s location. Sue is ready to mount an expedition to find Franklin, but Johnny has had enough of the FF’s recent disastrous adventures, and announces that he and Lyja are staying behind to watch over Lyja’s egg (I still can’t believe Lyja laid an egg).

Suarez the electrical engineer shows up at HQ, asking to see the FF. Then the ominous spaceship from the first scene arrives, knocking out power to the building. Suarez runs off, and the Collector beams down from the spaceship. The Collector is of course a celestial being obsessed with collecting unique items from throughout the universe, and he’s come to collect the egg. He fights Johnny and Lyja, summoning a giant robot for help. Lyja discovers her laser-blasting powers are gone, so she shape-shifts into a giant monster to fight the robot. 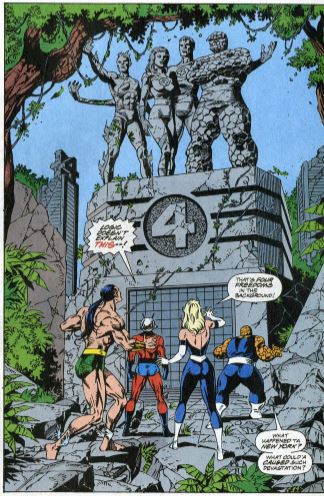 The rest of the FF follow’s Franklin’s signal not to outer space, but to a jungle, where they are surrounded by primitive cavemen. The heroes discover a statue of the original four FF among some ruins, and the cavemen attack, saying the FF are the ones who caused “the great destruction.” Ant-Man finds a hidden door inside the sculpture, leading to underground tunnels. Ant-Man and Namor freeze in place, and the Watcher appears. The Watcher tells Sue and Ben that he’s the one who brought them to the jungle, and they indirectly led to the destruction of this world. 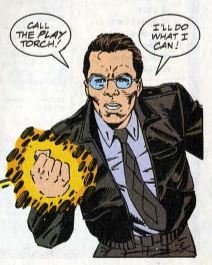 Back at HQ, Suarez shows up again, revealing he has laser powers, and helps turn the fight in the heroes’ favor against the Collector. The alien device from the start of the issue is the one Paibok gave to Lyja for her “laserfist” powers, and those powers have now transferred to Suarez. A crack appears on the surface of the egg, and the Collector determines that the egg is a “fake.” He teleports away, saying it is not worth of his collection. Johnny asks Lyja what this means, and it’s time for another big revelation. She says to Johnny, “You are not its father!” 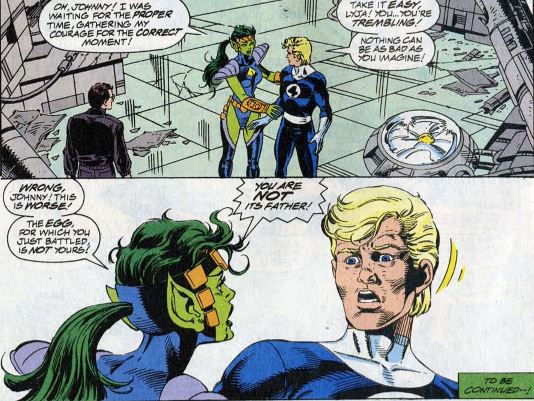 Fade out: Sue reacts with shock when Ben refers to Namor as her “boyfriend,” but she doesn’t exactly deny it, either.

Clobberin’ time: When Reed isn’t around to explain the FF’s time-tripping, Ben thinks about how much he misses Reed, but he doesn’t say this out loud.

Flame on: Johnny refusing to join the rest of the team on their expedition further foreshadows the upcoming team breakup storyline.

Fantastic fifth wheel: Ant-Man further cements his status a teammate by operating all the time travel tech, finding the hidden passage to the tunnels, and summoning ants to distract the cavemen.

Four and a half: Franklin’s interaction with Huntara completely changes their dynamic, setting up their soon-to-published spinoff comic, Fantastic Force.

The Alicia problem: Lyja spends the issue trying to tell Johnny her big secret, only to keep being interrupted. The question is, why now? Perhaps it’s because she knows the egg is about to hatch. 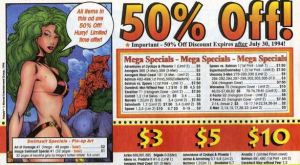 Trivia time: This is the first time the Collector has appeared in the pages of Fantastic Four, although he and our heroes briefly crossed paths in the Contest of Champions miniseries. Most of the Collector’s appearances have been in Silver Surfer, with him always hoping to get his hands on a cosmic cube.

Fantastic or frightful? This should be a big issue with a lot of big revelations, but it’s all so cluttered and unfocused. This is supposed to be the next chapter in an going superhero/sci-fi epic, but I’m left wondering why I should care.

Next: Let’s all get molecular.