Reading the Fantastic Four comics from the start. The FF broke up at the end of the last issue, so it’s time for the next generation to step up and fill the void. Marvel published 18 issues of the spinoff Fantastic Force in the mid-90s. Here’s the first half.

We begin right after the breakup of the Fantastic Four, with T’Challa (a.k.a. the Black Panther) encouraging Frankling and Huntara to stay with him and start a new team to carry on the FF’s legacy. Vibraxas and Huntara don’t get along, both too eager for a fight, while Devlor just wants to fit in and enjoy human stuff like TV and hamburgers for the first time. Klaw attacks T’Challa’s fancy Manhattan loft, reminding us that he’s one of Black Panther’s chief antagonists. With Franklin’s telepathic help, the new heroes manage to work together and defeat Klaw. They decide to stick together as Fantastic Force.

Our heroes battle new villains Zarathrustra and Lord Moses, who reside beneath the Arctic Circle. The baddies are after an experimental “omnivirus” which has the potential to cure all diseases. Vibraxas threatens to quit the team (a breakup plotline in only the second issue?) but eventually joins the fight. 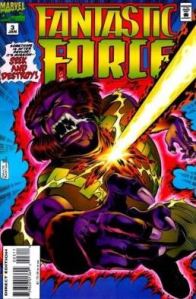 Franklin insists that Devlor be enrolled in school, which Devlor sees as “captivity.” The Inhuman known as the Seeker attacks, hoping to return Devlor to the Inhumans. There’s a big fight, but the Seeker comes around and ends things as friends with Devlor. There’s also some real cringe-y ‘90s preachiness as Vibraxas learns a very special lesson about racism.

The mad scientists at AIM (Advanced Idea Mechanics) create a new Super Adaptiod, which goes on the loose, heading straight for NYC. Captain America, suffering a loss of his strength from his super-soldier super-serum, fights the Adaptoid. The Fantastic Force goes shopping so Huntara can buy “normal girl” clothes, while Vibraxas stops a convenience store robbery. The team helps Captain America fight the Adaptoid, with Huntara opening a portal and transporting it into a “void of non-existence.” Cap gives the young heroes an approving pep talk. 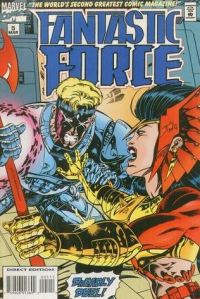 While exploring New York at night, Huntara comes across a rave and tries to help a woman in trouble. She then is confronted by the symbiote Dreadface. Franklin joins the fight, and Dreadface temporarily takes over Franklin. Huntara eventually banishes Dreadface to another realm, like she did with the Adaptiod. Meanwhile, Lord Arcadus, current ruler of the Inhumans after the fall of the Royal Family, is investigating Devlor in hopes of returning him to the moon.

The public learns of Fantastic Force’s existence after the media catches them defeating the Grey Gargoyle. Then there’s more preachiness about cultural sensitivity in the midst of a gang war between an Asian gang called the Sons on Sinaju and the Wakandan Lords. Fantastic Force breaks up the fight, with Franklin proudly proclaiming that they’re more than a team — they’re family.

We cross back into Fantastic Four continuity when Fantastic Four is approached by Lyja the Skrull, who says she’s concerned about Sue Richard’s safety. The team follows Sue to Doctor Doom’s castle, where Franklin learns that “Dr. Doom” is currently his grandfather Nathaniel Richards in disguise. The team then teleports to the Watcher’s home on the moon, where they are reunited with the Fantastic Four, and help rescue Sue from the Negative Zone. There’s a lot of talk about contacting the leaders of the Watchers, ending on a cliffhanger leading into Fantastic Four #400. 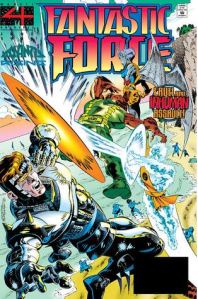 This issue is part 7 of Marvel’s 11-part Atlantis Rising crossover, so we’re dealing with the destruction of Attlian, Thor fighting Morgan Le Fay, and Atlantis emerging onto the ocean’s surface. Franklin, Huntara and Devlor fight the crossover’s main villains, the Crimson Cadre, while Vibraxas deals with the drama of having accidentally killed a gang member during the gang fight in issue #5. Finally, a reporter named Paul Alvarez catches up with the team, claiming that Huntara is really his long-lost sister. 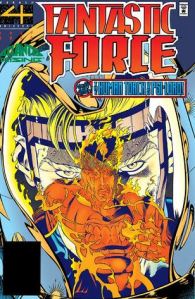 This is part 9 of Atlantis Rising. Meanwhile, the city of Attilan survived, being shrunk down inside a bottle and all the crossover participants are fighting over it. That Alvarez guy claims that his sister disappeared into a mysterious portal when she was a child, only to be snatched into another timeline by Nathaniel Richards, who raised her as his own. Huntara doesn’t buy it, but Franklin considers it. The team then travels again to Latveria, to rescue the FF’s own Johnny Storm from being brainwashed by Maximus the Mad. Finally, a child version of Franklin appears, wearing his “Tattletale” costume from Power Pack. This is not the return of classic kid Franklin, even though that’s what the issue wants you think. What it really is, is…

Four and a half: The series establishes that Franklin’s “hound” scars he got in the Days of Future Past timeline appear on his face whenever there is space-time weirdness nearby, basically an early-warning sign that villains are in the area.

Barbarian swordswoman: According to the Marvel Wiki, the mystery of Huntara’s origin is never revealed. Most fans seem to agree that she is not Alvarez’s long-lost sister, and the sister is really Zarathrustra from issue #2 but, again, the truth has never been revealed. The Marvel Wiki also states that Huntara’s birth name is Tara Richards.

Good vibrations: Although initially introduced as a mutant, this series establishes that Vibraxas was exposed to energized Vibranium as a child. His body is infused with the Vibranium, giving him his vibratory powers.

Talkin’ ‘bout my de-evolution: Lord Arcadus is obsessed with Devlor because he believes Devlor’s evolution-based powers could be the key for all Inhumans to “break free from genetic stagnation.”

Wakanda forever: Aside from letting the team stay in his Manhattan loft (which has its own danger room, of course) and dispensing the occasional bout of fatherly wisdom, Black Panther doesn’t do a whole lot of team mentoring. I guess he prefers the “hands off” approach.

Fantastic or frightful? All the gang/racism stuff is handled poorly, in that they-meant-well-but-accidentally-made-it-worse way. Also, forcing the book into a bigger crossover creates a lot of confusion, but that’s nothing new for Marvel readers. Other than these two complaints, though, there’s a lot to like in Fantastic Force. It has a lot of the “superhero soap opera” feel that helped make the X-Men so popular for so long.