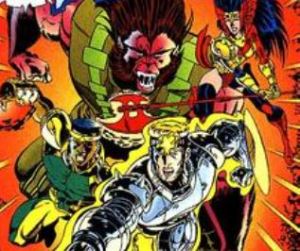 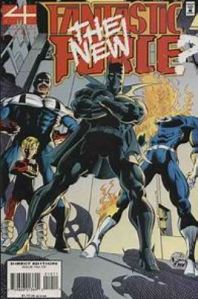 The child Franklin who appeared at the end of the last issue is not here via time travel, but is instead a psychic projection of Franklin’s, along with another known as the “Ego-Spawn.” There’s some talk of Franklin being “the Avatar” of these various “psycho-plasmic entities.” After much in-fighting among the teammates, Franklin agrees to turn leadership of Fantastic Force over to the Human Torch. This new team then travels to Turkey in search of the Omnivirus, which could cure all diseases but could also (of course) be used for evil. They encounters villains Lord Moses and Zarathrustra, also in search of the virus.

Franklin and his other-self constructs return to the alternate universe of Elsewhen, where he learned to be a warrior during his years of time-traveling. He is reunited with alien warlord Kargul, who warns him of doom. On Earth, the Fantastic Force manage to defeat Lord Moses and stop the Omnivirus, but not before Devlor is exposed to the virus. The team then travels to Elsewhen where they are confronted by a new villain, Vangaard. 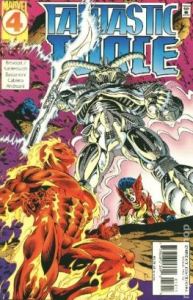 Fantastic Force teams up with Kargul to fight Vangaard, who is revealed to be Johnny Storm from an alternate reality, last seen way back in Fantastic Four #163. Everyone but Franklin escapes, while Franklin heads out to fight Vangaard on his own. He unleashes the full extent of his potentially world-ending powers to stop Vangaard, seemingly killing himself in the process. It doesn’t work, as Vangaard survives. The team re-confronts Vangaard, and Johnny manages to reason with him, helping Vangaard regain his humanity. Meanwhile, She-Hulk and Wyatt Wingfoot show up again, where they encounter a mysterious homeless man in New York.

Franklin is alive, placed in a “zero chamber” to heal, and his psychic constructs have been absorbed back into his brain (or something). Huntara then announces that she is leaving the team, as Elsewhen was always meant to be her home. Back in New York, the team encounters She-Hulk under control of the Puppet Master, stealing artifacts from a museum. Johnny invites She-Hulk to join the Fantastic Force, filling in for Huntara, and she accepts.

The team travels to Wakanda, where Vibraxas stands trial for the gang member he inadvertently killed in issue #5. She-Hulk conveniently acts as his lawyer. The homeless man from two issues ago is revealed to be Diablo, who says he has She-Hulk in his “thrall.” Vibraxas is reunited with an old girlfriend, R’Shumba, and his father, N’Kano. Vibraxas tries to destroy a vibranium research facility, which was the source of the accident that gave him his powers, accidentally unleashing a vibranium monster from underneath the building.

Fantastic Force fights the vibranium monster, called the Vibravore. The monster contains the “psychic-static” of everyone who died in the accident that gave Vibraxas his powers, including Vibraxas’ mother. It’s a big fight, with Devlor rapidly losing control of his animalistic side. The fight ends with no trace of Vibraxas’ long-lost mother. Back at the trial, the Wakandans find Vibraxas not guilty, but they also vote to revoke Fantastic Force’s funding. At that moment, Devlor loses control, transforming into an even more beastly form.

Back in NYC, Devlor continues to mutate out of control, thanks to his exposure to the Omnivirus. Johnny has departed, leading everyone to wonder whether Fantastic Force is even a team at all anymore. Vibraxas takes a job from a friend, a Korean shop owner, to help fight off local street gangs. Villainess Zarathrustra escapes from the cops and battles encounters fellow villain Go-Devil, who is also part of the street gang plot. Finally, Devlor appears to die, only for his body to give “birth” to a new Devlor, looking just like he did back in issue #1. Gross.

The Wakandans evict Fantastic Force from Black Panther’s loft in Soho, so She-Hulk has the team use her apartment as its new HQ. Once there, the team experiences a bunch of weird hallucinations, revealed to be the work of Diablo. What’s more, Diablo reveals he’s working alongside the demon Mephisto.

With the team still under Diablo’s spell, Diablo reveals his partnership with Mephisto is all an act, and that he really wants to use Franklin’s powers to destroy Mephisto, like Franklin did back in Fantastic Four issue #277. Diablo mind-controls She-Hulk to attack her teammates. Each team member overcomes Diablo’s influence, and they work together to destroy Diablo’s potions. Thinking he’s won, Diablo travels to Hell, only to be attacked by Mephisto’s minions. Back on Earth, the series ends when the heroes are reunited with the one and only Fantastic Four, revealing… well, this blog will get there soon enough.

Four and a half: Franklin is really put through the wringer in these issues, first by sacrificing himself to save the day, and then trying and failing to keep his new team together. Also there are a ton of continuity nods to his character’s history.

Barbarian swordswoman: This is pretty much the last hurrah for Huntara. She will appear again briefly during the Onslaught crossover, and in Civil War she is mentioned but not seen as a potential recruit for the Fifty States Initiative. (Does this mean she came back to Earth at some point?)

Good vibrations: Vibraxas will go on to occasionally guest star in Fantastic Four, and has been a recurring character in various Black Panther comics over the years.

Talking about my de-evolution: Poor Devlor pretty much disappeared from the Marvel Universe after this. His only other notable appearance was when he joined a group of characters all interviewing for the job of nanny for Jessica Jones and Luke Cage’s baby. Other potential nannies included D-Man, Squirrel Girl, Groot, Molly from Runaways, Beverly from Howard the Duck, and (of course) Deadpool.

Wakanda forever: I’m not clear on who these Wakandan judges are, who boss around Black Panther, their king. But, hey, what do I know about politics?

Flame on: Bringing Johnny on board as team leader for five issues then abruptly writing him out stinks of editorial interference. His confrontation with his alternate self Vangaard is interesting, but Vangaard remains a hokey character.

Force-tastic fifth wheel: She-Hulk appears here shortly after the cancellation of her solo series which, at the end, had her working with Millie the Model and acting in a soap opera (!). Also, she and Wyatt split up in the miniseries She-Hulk: Ceremony, so they are hanging out in this series just as friends.

Trivia time: Fantastic Force had one other notable appearance, in Secret Defenders #25. That issue had a variety of psychic characters around the world sensing the appearance of supervillain Sloriath, including our own Franklin.

The title Fantastic Force returned in 2009 with none of these characters and an entirely different premise. Six superheroes from a post-apocalyptic future — including Hulk and Wolverine — traveled to the present to stop their apocalypse. The other members of that team were Lightwave, Psionic, Natalie X, and Alex Ultron. This version ran only four issues.

Fantastic or frightful? While I enjoyed the first half of this series quite a bit, it unravels in the second half, with meandering storylines and the obvious dark cloud of Marvel editorial forcing the Human Torch and She-Hulk into the series to make it more like FF. Still, Fantastic Force is fun when it sticks the more character-based stories. Unfortunately, plots are way too interested in alternate realities and alternate timelines which too often distract from the good stuff. So, a mixed bag. Here’s hoping someone incredibly talented can bring these characters back someday and make them work.