Reading the Fantastic Four comics from the start. Issue #399 finds us in the final act of Tom DeFalco’s long and controversial run as writer. 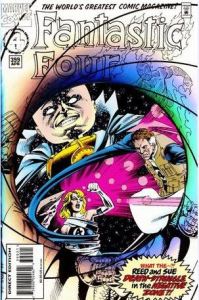 Gimmie a gimmick: This is the second of three covers to feature a “rainbow foil” cover, in a frame around the characters for an “iris in” effect. The frame gets larger and larger over these issues, as if the pressure is closing in on our heroes. There was also a  separately-sold regular cover.

The FF and Kristoff have traveled to the moon seeking answers from the Watcher about his manipulation of them over the last 20-some issues, only to learn that this is not Uatu, Earth’s watcher, but Aron the rogue Watcher. Aron says something about the Watchers fighting a battle for the fate of the universe, but our heroes aren’t interested in talking. They attack, with several pages of fighting. Kristoff manages to injure Aron with one of Dr. Doom’s weapons, and then Aron teleports Sue away from there.

Outside, on the surface of the moon, Ben is attacked by the a group of Inhumans known as the Crimson Cadre — Ator, Margoyle, Eelak, Glaboo, Pulssus, and Rootar. Inside the FF’s spaceship, which is parked nearby, Kristoff’s servant Boris watches the fight, insisting that Ben must not die. 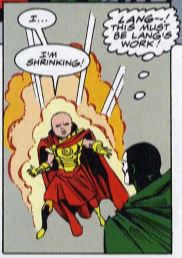 Inside the Watcher’s house, Aron wanders off looking for a power source, and Johnny follows. Ant-Man wants to help, but Kristoff dismisses him, thinking Ant-Man’s shrinking powers are useless. We then catch up with Sue, who has been teleported to the Negative Zone, standing upon an asteroid floating over a planet made of anti-matter. (I think. This part’s confusing.) She finds Reed there, who is happy to see her, but she quickly deduces that this really isn’t Reed.

Cut to the moon, where Aron finds the cosmic power that Dr. Doom stole from him in issue #373. He fights Johnny some more while Kristoff suspiciously fiddles with the power source. Ant-Man stalls Aron by temporarily shrinking him, and then Kristoff reveals he rigged the power source to steal more power from Aron, rather than restore it. 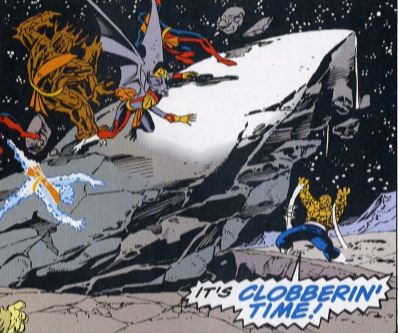 On the surface, Ben continues to fight the Inhumans, until Boris commandeers the ship’s weapons, convincing the Inhumans to stand down. Inside, Aron refuses to accept defeat, saying that humanity is certain to perish in the “coming cataclysm.” He then teleports away.

In the Negative Zone, Sue reveals that this version of Reed is really the Dark Raider, an evil Reed from another timeline the team met recently. He’s been working with Aron, and he says he and Sue can restart the human race as a new Adam and Eve there in the Negative Zone. She won’t have it, and they fight. He eventually falls into the anti-matter, with Sue too exhausted from the fight to save him. The issue ends with the FF and Kristoff on the moon, finding Sue on a viewscreen but unable to reach her, as she remains trapped in the Negative Zone.

Fade out: Sue not only overpowers the Dark Raider, she is also smart enough to know to destroy his flying harness so he can’t escape her.

Clobberin’ time: Ben brags to the Crimson Cadre about how he knows the Inhumans’ royal family, saying he and Gorgon once shared some tequila while Karnak “danced the lambada.” For continuity’s sake, I will assume he’s exaggerating.

Flame on: When fighting Aron, Johnny tries that move where he makes a bunch of flame-based duplicates of himself. Aron sees right through it, appropriately.

Fantastic fifth wheel: Ant-Man’s plan includes shrinking not just Aron, but Kristoff as well. He doesn’t say why he also shrinks Kristoff, except to escape.

Trivia time: Although not said in this issue, the Marvel Wiki insists that the Dark Raider is still possessed by the psychic entity Malice. Further, the wiki states that neither Malice nor the Dark Raider appeared again after this issue.

Similarly, the Crimson Cadre would appear briefly in the Atlantis Rising crossover shortly after this, and then they too never appeared again.

Fantastic or frightful? It’s another all-they-do-is-fight issue, basically a placeholder before the big #400. The stuff between Sue and the Dark Raider is quite interesting, but still comes off as filler.